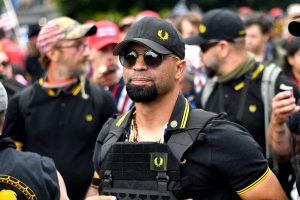 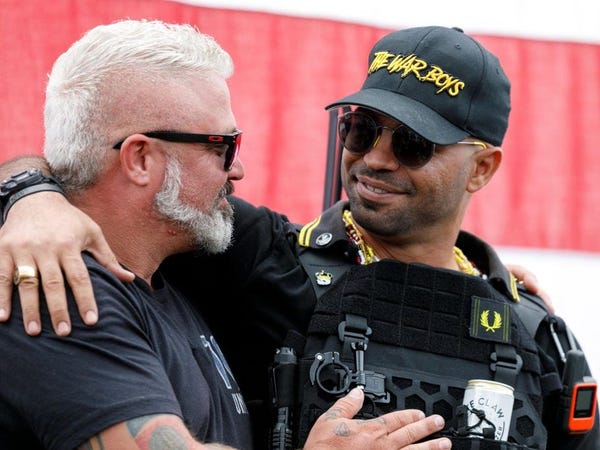 President Donald Trump generated headlines when he said the Proud Boys — a self-proclaimed "fraternity" of "Western chauvinists" categorized by the Southern Poverty Law Center as a hate group — should "stand back and stand by" during the first presidential debate on September 29.

Founded in 2016 by Gavin McInnes, the co-founder of Vice Media, the Proud Boys are a male-only, pro-Trump, right-wing extremist organization that pushes for closed borders, smaller government, and more guns.

While the Proud Boys and other right-wing extremist organizations are often framed as fringe groups with outlandish beliefs, many everyday people make up their ranks.

Insider spoke to experts in sociology, psychology, and white supremacy on what drives people to join extremist organizations like the Proud Boys.

As the country grows more racially diverse, right-wing politicians sometimes frame diversity and racial equity movements like Black Lives Matter as a threat to young white men and their success.

"They feel this change results in an unfair society that is losing its most revered traditions," Dr. Brian Levin, Director of the Center for the Study of Hate & Extremism at California State University, San Bernardino, said.

Dr. Tristan Bridges, a professor of sociology at the University of California, Santa Barbara, told Insider people who join hate organizations like the Proud Boys tend to be heavily invested in a specific view of masculinity and feel they have been denied their ability to achieve it.

"Lots of men understand masculinity as implicitly tied to economic success, heterosexual access to women, achieving social status among groups of other men, and the like, and this is where groups like the Proud Boys come in," Bridges told Insider.

There is no unified psychological profile for people who join white supremacist and neo-Nazi organizations. The most common characteristic is their need for respect and significance, according to Dr. Arie Kruglanski, professor of psychology at the University of Maryland.

"Many of them would have suffered humiliation in some form, either bullying in their childhood at home by their parents and other adults and in their adulthood of feeling denigrated and humiliated by experts and other elitists and threatened by their significance being taken away from them by ascending minorities," Kruglanski told Insider.

People who join hate groups don't typically start off with the violent views they espouse. Rather, they join to find a sense of belonging and become radicalized after joining. Dr. Tore Bjørgo, a Norwegian social anthropologist, discovered this studying white nationalist groups in Scandinavia in the 1990s.

"It basically means that the men who join do not hold the violent extremist views these groups are known for before joining up," Bridges told Insider. "The radicalization comes later."

As organizations like the Proud Boys are catapulted into the spotlight, the conversation about addressing racism in the US has shifted recently to addressing these hate groups.

But the problem with framing the Proud Boys and other right-wing extremist organizations as the focal point of racism in the US  is that it implies they are the only people capable of racism, Dr. Patrick Grzanka, a professor of psychology at the University of Tennessee, Knoxville, told Insider.

"There's so little else that actually ever constitutes racism according to these unspoken rules," Grzanka said. "Nothing that is racial is ever racist, except when you're a white supremacist."

The psychological phenomenon of detaching from how you might be contributing to racist structures and externalizing guilt is called negation, according to Grzanka. When people focus solely on extremist organizations and don't look internally, it aids in this process.

"From a psychological and sociological perspective, distinguishing between your racist uncle and the Proud Boys does some work for [white people]," Grzanka said. "The logic goes that even what your uncle is saying is terrible, at least he's not a member of a white nationalist group. But avoids the uncomfortable reality that the political consequences of these racist ideologies are so similar."

What to know about the Proud Boys, the extremist group that Trump name-checked during the first presidential debate

Insights on the effects of exercise on cognitive performance

For infants, distinguishing between friends and strangers is a laughing matter: Study shows five-month-olds can make judgments about relationships through co-laughter