Verily launches COVID-19 triage website, but only for some Bay Area residents 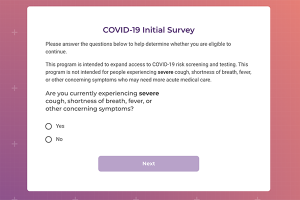 Alphabet’s Verily has launched a website where California residents can complete a short survey regarding their current condition and, if they meet certain criteria, could be referred to a nearby mobile COVID-19 testing site.

Conducted through Verily’s Project Baseline population health effort and developed in collaboration with federal, state and local public health authorities, the triage program was promoted by President Donald Trump Friday during an address to the country on efforts against the novel coronavirus.

The president said during this address that this site would help facilitate testing across the U.S. However, the tech company later cautioned that the pilot public health program launched today is still “in its early stages.”

Currently, the survey only asks users whether their COVID-19 symptoms are severe, whether they are older than 18 years and whether they live within 50 miles of Santa Clara County or San Mateo County. The operational capacity of these early test sites also seems to be limited – as of this afternoon, responses that would normally yield a referral to testing services receive a message from the company that says it is “unable to schedule more appointments at this time.”

In a Google blog post, the company detailed a range of other initiatives it is taking to stem the impact of COVID-19. These efforts include the promotion of World Health Organization educational initiatives across its platforms, the removal of misinformation from its websites and services, donations and grants through its philanthropic arm, and the release of open-source research from its artificial-intelligence subsidiary DeepMind.

Alphabet’s brands and platforms play a central role in how many people use technology, meaning that the company is well poised to influence information-seeking and social behaviors at a time when public health officials are calling for more-stringent prevention measures.

Verily’s website seeks to streamline both triage and testing – two areas in which the U.S. response to the pandemic has so far been criticized. But so far it doesn’t look as if the life sciences subsidiary will be able to stem the tide without seriously expanding its effort.

With more than 150,000 confirmed cases and 5,735 deaths as of March 15, the worldwide coronavirus pandemic has brought much of the world to a standstill as countries and businesses alike work to halt its spread. Digital health has been no exception in this regard, with dozens and dozens of startups, major tech players and other entities announcing new services ranging from COVID-19 health-alert integrations for EHRs, informational apps, live disease tracking and a major uptick in telehealth utilization.

Mediterranean Diet May Cut Stroke Risk for Women, But Not Men