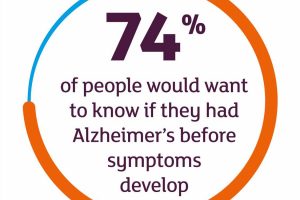 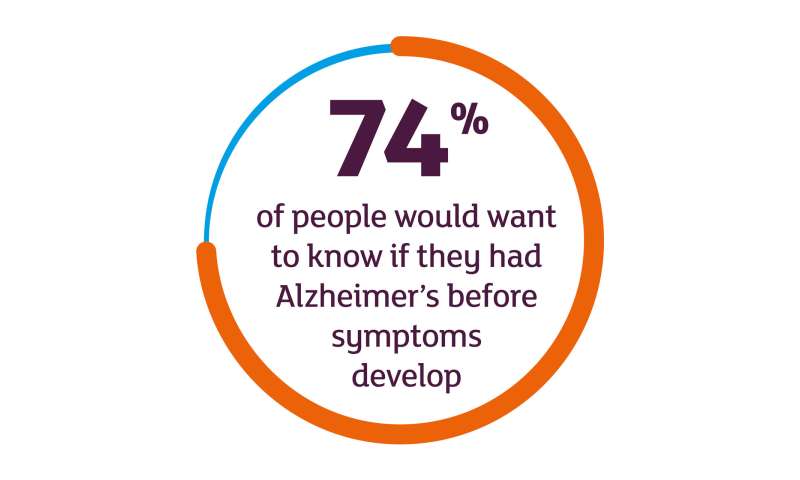 Over a third of people would want to know they had Alzheimer’s disease 15 years before symptoms show, according to new findings from Alzheimer’s Research UK.

The UK’s leading dementia research charity published a report, Detecting and diagnosing Alzheimer’s disease, revealing the public’s attitudes toward early detection and diagnosis of Alzheimer’s, the most common cause of dementia. The report calls for action to improve communication about dementia, support research efforts into earlier diagnosis and prepare the NHS for future treatments.

The report reveals that the public has a strong appetite to find out if they would develop Alzheimer’s disease, although most want tests to be accurate and to give certainty about disease progression.

Currently Alzheimer’s is diagnosed when symptoms such as memory loss appear, but the disease can begin damaging the brain years and perhaps decades before this point. Research suggests that being able to pick up these changes earlier has the potential to transform how and when we treat the disease.

Research in this area is progressing at pace and new diagnostic tools, such as blood tests, are on the horizon—while pharmaceutical company Biogen will soon file for FDA approval for the drug aducanumab, designed to be given in the early stages of Alzheimer’s.

Alzheimer’s Research UK, along with pharmaceutical company MSD, set out to get a clearer picture of people’s attitudes in an effort to understand potential barriers that could hold back research and delay future treatments.

Other key findings from focus groups and a Populus survey of 2,106 people include:

But the results also highlighted a lack of understanding about the progression of Alzheimer’s. Over half of UK adults (51 percent) surveyed didn’t know or disagreed with the statement, “Alzheimer’s begins decades before symptoms emerge.”

The report highlights the important role doctors play in talking to people about early diagnosis and helping to shape public understanding of the different tests that are available now, or that research might deliver in the near future. It also makes recommendations on how the NHS can better inform the public about this topic, including recommending language guidance on how to talk about early detection and diagnosis.

“For many people dementia, which is most commonly caused by Alzheimer’s disease, is the most feared health condition. This can make it hard to start the important conversation about why we might want to start diagnosing Alzheimer’s early.

“But this challenge is one we must overcome. Research suggests that our best shot at bringing about life-changing treatments and transforming the outlook for people with dementia may start by picking up diseases like Alzheimer’s very early, and perhaps even before symptoms start. These efforts are particularly timely in light of recent preliminary but encouraging results from clinical trials of new treatments in people with early stage Alzheimer’s.

“It’s vital that we begin discussions with the public about why and how we can start to make an earlier diagnosis of Alzheimer’s. This report suggests that the public is ready for this discussion—and that clinicians have a vital role to play.”

“Right now, we face the frightening reality that one in three people born today will develop dementia in their lifetime, unless we find new preventions and treatments. To achieve this feat, we must be diagnosing diseases like Alzheimer’s much earlier than we can today. This is a major focus for Alzheimer’s Research UK and we’re investing millions of pounds in research to make breakthroughs in this area.

I Lost My Eye in a Random Act of Gun Violence. Here's What I Need People to Know
15, a, alzheimers, before, have, Know, of, People, symptoms, they, third, to, want, Would, Years
Latest Posts