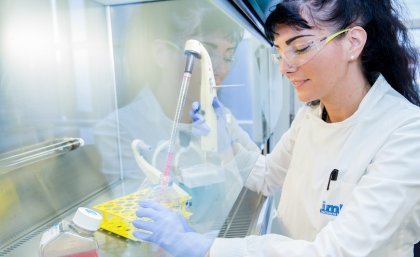 Research discoveries revealing the genetic causes of neurological degeneration could be a key to slowing the progression of devastating diseases.

A research team led by Dr Marija Kojic and Professor Brandon Wainwright from The University of Queensland’s  Institute for Molecular Bioscience (IMB) and Dr Sebastian Glatt from the Jagiellonian University in Krakow, made the findings in a study of cerebellar ataxias.

Dr Kojic said cerebellar ataxias were caused by damage to the cerebellum, the part of the brain that controls motor function.

“These rare but devastating conditions get worse over time, causing poor coordination, unsteady walking, difficulty speaking and swallowing, and difficulty performing fine motor skills such as buttoning a shirt,” she said.

“While they are often caused by environmental factors such as alcohol, these conditions also have genetic causes, which have so far been largely unexplored.

“For the first time, we have found a link between ataxias and a mutation of the Elongator gene, which regulates how our brain cells produce proteins.”

The researchers discovered this mutation slows production of the proteins that neurons need to function, causing them to gradually degenerate.

Professor Wainwright said the team also uncovered a link between inflammation of brain cells and brain degeneration, including ataxias.

“Our study revealed inflammation in the cells surrounding the degenerated cells,” he said.

“While this is not unusual, we found that blocking this inflammation slowed the rate at which the cells were dying.

“This effect occurs across a broad range of neuro-degenerative conditions, such as Alzheimer’s disease, Parkinson’s disease and motor neurone disease, which has profound implications for the treatment of these diseases.

“We may not be able to stop this neurological degeneration but if we can slow it down – for example, so a disease takes 20 years to progress, rather than 10 – this could have a huge impact on the health and quality of life of people living with these conditions.

Professor Wainwright said cerebellar ataxias were terrible diseases with no cure, but research offered hope for the future.

“Understanding how genes play a role in the development of cerebellar ataxias is a step forward in the journey towards finding an effective treatment.”