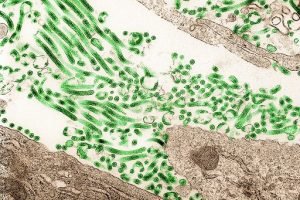 An army of health workers fighting the Ebola epidemic in the east of Democratic Republic of Congo are confronting denial and false beliefs regarding the highly contagious hemorrhagic virus.

“Ebola is a war,” said Ndjoloko Tambwe Bathe, who heads a programme to combat Ebola, which has claimed 85 lives including three new deaths in Beni, according to the health ministry.

“The idea is that people should… understand that if there is a suspect case they should notify the authorities, and they should accept that the victims are taken to hospital,” he said.

“Some families have long hidden sick people, prevented health workers from taking patients to the Ebola Treatment Centre and refused to be vaccinated,” the ministry said in a statement, adding that several attacks on medical personnel had been reported.

At a recent gathering in Beni, several people voiced their doubts over Ebola, one of the world’s most feared viruses that in extreme cases causes fatal bleeding from internal organs, the mouth, eyes or ears.

“Couldn’t vomiting or a fever come from some other virus than Ebola?” one speaker asked. “Are the tests reliable in confirming Ebola? Why is it that the Ebola we have here does not come with bleeding?”

“The people are in doubt,” 21-year-old Edouard Karafuli told AFP, summarising the speeches made in Swahili.

He said the speakers are saying that “a sick person is sent to hospital and we don’t know where he goes next. It could be that he has some of his body parts that are cut off and then they bring back the cadaver.”

The Red Cross’s “dignified and safe burials” are not widely appreciated.

Karafuli said “they promise to bury our corpses according to our customs, but that’s not the case. When Red Cross people turn up, we throw stones at them because they don’t want to show proof about this illness.”

In the face of rumours, false beliefs and cultural or religious misunderstanding, health workers have called on Ebola survivors to tell their stories.

“Those of us who were cured have a lot of messages for the community,” said Jotham Kyungolo, 40, who was contaminated while helping Ebola victims in nearby Mangina.

“Some said, and they still think it, that at the Ebola Treatment Centre people don’t eat and many die of hunger, which isn’t true,” he said.

“We have to show how the treatment is carried out there so people are willing to go to the centre as soon as they feel sick,” said Kyungolo, who speaks about Ebola on behalf of Oxfam and the UN Children’s Fund.

Like others that he calls “Ebola beaters”, Kyungolo was driven home after his release from hospital aboard a truck with a loud hailer proclaiming his cure and broadcasting celebratory songs.

“There are rumours; we have to remove these rumours from people’s heads. You will help us,” Germain Kahoko shouted over the loud hailer.

“Recent trends suggest that control measures work,” the WHO said in a statement on Tuesday.

The UN agency said “significant risks” remained however, including “the reticence of some communities to adopt prevention behaviours.”

Why we’re susceptible to fake news, how to defend against it
against, beliefs, Congo's, Dr., Ebola, traditional, Up, war'
Latest Posts