Infants can distinguish between leaders and bullies, study finds 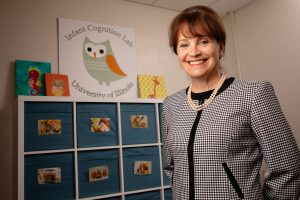 A new study finds that 21-month-old infants can distinguish between respect-based power asserted by a leader and fear-based power wielded by a bully.

The study, reported in the Proceedings of the National Academy of Sciences, analyzed infants’ eye-gazing behavior, a standard approach for measuring expectations in children too young to explain their thinking to adults. This “violation-of-expectation” method relies on the observation that infants stare longer at events that contradict their expectations.

“For example, infants will stare longer at scenarios where larger characters defer to smaller ones. They also take note when a character who normally wins a confrontation with another suddenly loses,” she said. “But little was known about infants’ ability to distinguish between different bases of power.”

To get at this question, Baillargeon developed a series of animations depicting cartoon characters interacting with an individual portrayed as a leader, a bully or a likeable person with no evident power.

She first tested how adults—undergraduate students at the University of Illinois—responded to the scenarios and found that the adults identified the characters as intended. Next, she measured the eye-gazing behavior of infants as they watched the same animations. 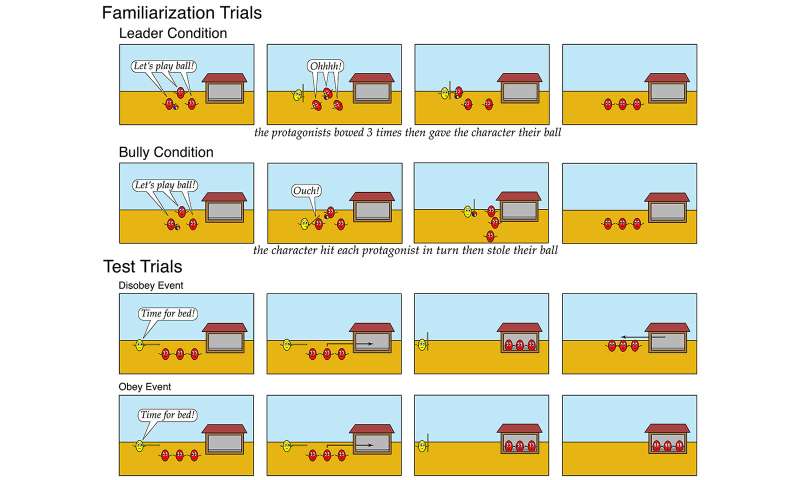 “In one experiment, the infants watched a scenario in which a character portrayed either as a leader or a bully gave an order (“Time for bed!”) to three protagonists, who initially obeyed,” Baillargeon said. “The character then left the scene and the protagonists either continued to obey or disobeyed.”

The infants detected a violation when the protagonists disobeyed the leader but not when they disobeyed the bully, Baillargeon found. This was true also in a second experiment that repeated the scenarios but eliminated previous differences in physical appearance between the leader and the bully (see graphic).

A third experiment tested whether the infants were responding to the likeability of the characters in the scenarios, rather than to their status as leaders or bullies.

“Finally, when the likeable character left, the infants expected the protagonists to disobey, most likely because the character held no power over them,” Baillargeon said.

The new findings confirm earlier studies showing that infants can detect differences in power between individuals and expect those differences to endure over time, Baillargeon said.