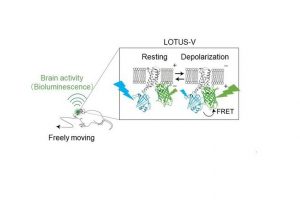 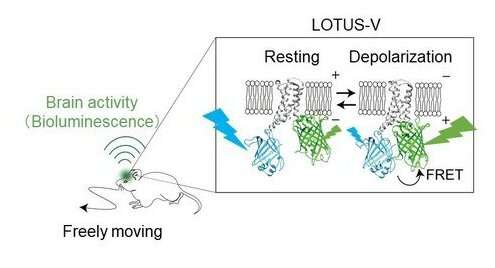 Existing electrophysiological and fluorescence-based brain imaging techniques in mice are generally invasive, require head fixes or cables, and are not suitable for long-term recordings. While there have been recent advances in imaging methods in freely moving animals, these are major limitations for researchers that are interested in the brain correlates of social behaviors.

Researchers at Osaka University have developed a new method to record brain activity simultaneously in multiple, freely moving mice. The method is based on a recent bioluminescence-based indicator of membrane voltage called “LOTUS-V.” The LOTUS-V bioluminescent probe is genetically encoded, which means that it is delivered to target cells non-invasively via a common gene expression system (the adeno-associated virus). Its signal is derived from cell membrane voltage changes, which reflect brain activity.

LOTUS-V was applied to cells in the primary visual cortex; this area was targeted because it is known to respond to locomotor activity and visual stimulation. LOTUS-V signal changes reflected neural activity in response to visual stimuli and locomotor activity, as well as during interactions with other mice; neural activity was significantly higher when a mouse approached others. Furthermore, the LOTUS-V signal was not affected by leaky signals emitted from other, nearby mice, which means that it faithfully reflected in vivo brain activity. 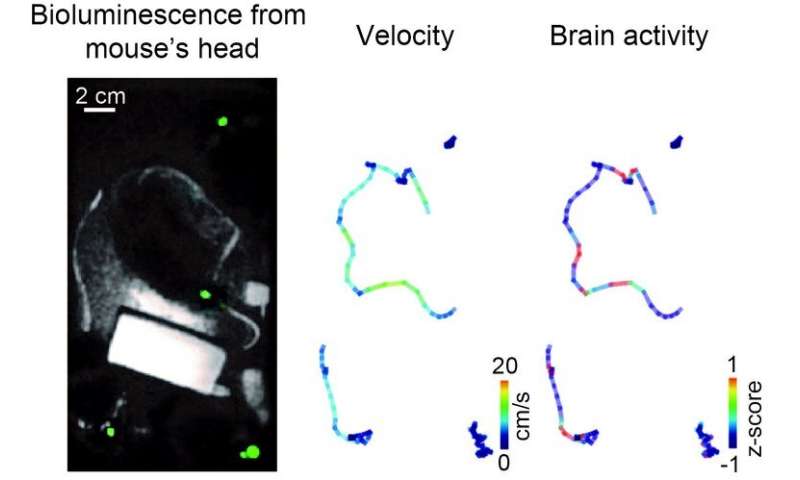 “Our method successfully detected activity of the superficial layer of the primary visual cortex—this is about 300 μm deep,” says Shigenori Inagaki, first author of the study. “It will be important to test its applicability to recording in deeper brain regions.”

While the temporal resolution of the LOTUS-V method was sufficient to investigate the dynamics of brain activity triggered by specific events, it is not yet superior to that of the fiber-based method.

Scientists show change in beliefs associated with dopamine in brain