Scientists show change in beliefs associated with dopamine in brain 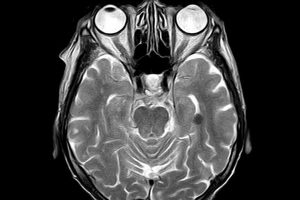 For the first time, scientists have been able to image brain activity when people change their short-term beliefs, and to relate this brain activity to dopamine function in humans. UK scientists monitored brain activity when people changed simple beliefs about the causes of their perceptions, but the results may have important implications for understanding how the brain supports the formation of more general beliefs. This work is presented at ECNP Congress in Barcelona, and at the same time is published in the peer-reviewed journal, PNAS.

One of the most challenging problems that the brain solves is to accurately represent the external environment (form beliefs about it), and to update this representation in the face of new sensory evidence. Previous work, particularly in rodents, has identified that the neurotransmitter dopamine might be involved in this process, however there has been no direct evidence of this in humans, partly due to the difficulty in measuring dopamine function in humans.

A group of UK scientists asked a group of healthy volunteers to undergo brain scans while performing a task which required them to update beliefs about the environment. As research lead Matthew Nour (at University College London and Kings College London’) said:

“We form beliefs about the world based on the information we get from our senses. When our sensory perceptions surprise us, it could mean that the world has changed and this might cause us to update our beliefs. For example, if we are told that it’s sunny outside, and then we hear raindrops, then we modify our belief. We can use functional brain imaging to investigate what is happening in the brain when people update their beliefs in this way “.

In this study, the volunteers were asked to respond to a series of sounds and images which were sometimes surprising, and caused them to change their beliefs about the task environment. Nour’s team used fMRI (functional Magnetic Resonance Imaging, high resolution brain scanners similar to those used in hospitals) to measure changes in brain activity while these beliefs were changing, and importantly also measured activity in the dopamine system using PET scans (Positron Emission Tomography, which uses a small amount of radioactive tracer to measure dopamine receptors in the brain) to relate brain activity to dopamine function.

“We found that two key brain areas of the dopamine system (the midbrain and striatum) appear to be more active when a person updates their beliefs about the world, and this activity is related to measures of dopamine function in these regions”.

Whilst previous studies had related dopamine function to learning about rewards, the present study is the first to directly show that dopamine might play a broader role in updating beliefs more generally in humans.

“This work may have several implications. We know for example that some medicines and some drugs of abuse cause significant changes in dopamine signaling in the brain. Cocaine and amphetamine, for example, increase brain dopamine release and can cause significant changes in our perceptions and beliefs about the surrounding world. Some psychiatric disorders are also associated with abnormal dopamine function. Our study shows how brain dopamine function might play a role in belief updating, and therefore helps us to understand how abnormal beliefs might arise in certain mental health conditions, and perhaps in everyday life.”, Matthew Nour added.

How lixisenatide slows or prevents damage to the kidneys in patients with type 2 diabetes and cardiovascular disease
associated, beliefs, brain, change, dopamine, in, scientists, show, with
Latest Posts