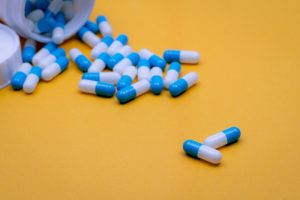 Introduction
Evolutionary Roots of the Problem of Sustainability
How does Antibiotic Resistance Develop and Spread?
The Invention of Antibiotics
Classifications of Antibiotics
Response from the World Health Organisation
References
Further Reading

Antibiotic resistance is a pressing issue that has been brought to the attention of the scientific community in recent times by the discoverer of the structure of DNA, James Watson.

In 2011, he and 30 other biological scientists from Canada, France, Finland, Belgium, Germany, the UK, and the US gathered in New York for a conference on antibiotic resistance in bacteria.

Following its results, the participants published a joint statement, which said with undisguised alarm: “The development and spread of antibiotic resistance in bacteria is a global threat to humans and animals that is generally difficult to prevent but manageable and must be addressed most effectively.”

“Furthermore, the facts about the essential role of bacteria in human life and well-being, the nature of antibiotics and the importance of their prudent use must be brought to the attention of the general public.”

Evolutionary roots of the problem of sustainability

The hypothesis that antibiotic-producing actinomycetes living in soils become a source of antibiotic resistance genes was formulated as early as 1973 by American scientists Benveniste and Davies.

However, later it turned out that the genes of AB producers have very low similarity with the genes of pathogenic bacteria. Therefore, it was suggested that any natural bacteria, and not just the producers themselves, are the source of AB resistance genes.

The first evidence in favor of this assumption was obtained by French scientists when studying the origin of beta-lactamase genes and quinolone resistance genes. In both cases, it was possible to find natural bacteria carrying genes that are almost identical to clinical ones. However, these were only isolated examples.

To convincingly confirm this hypothesis, it was necessary to isolate genes that are identical or almost identical to clinical ones from natural ecosystems that were not subjected to anthropogenic impact.

For the first time, such AB resistance genes from untouched ecosystems were discovered in 2008 by Russian geneticists from the Institute of Molecular Genetics of the Russian Academy of Sciences.

For these studies, samples of "permafrost" aged from 20 thousand to 3 million years were used. In 2011, Canadian researchers also found resistance genes in DNA isolated from a 30,000-year-old permafrost sample from the Klondike. At present, genomic research in this direction is being actively conducted in the laboratories of several countries.

How does antibiotic resistance develop and spread?

Why did such a situation arise that the once omnipotent ABs suddenly ceased to act effectively on bacteria? To answer this question, it is necessary to understand the main ways in which resistance arises and how it spreads.

Bacterial resistance to antibiotics can be congenital or acquired. Congenital resistance is due to structural features of the cell structures, which are targeted by the action of the antibiotic. Such resistance may be associated, for example, with the absence of an AB action target in microorganisms or the inaccessibility of the target due to the low permeability of the cell membrane.

Acquired resistance occurs because of contact of a microorganism with an antimicrobial agent due to the occurrence of mutations or due to horizontal gene transfer (HGT) of resistance. Currently, it is the horizontal transfer of various resistance genes that is the main reason for the rapid emergence of multidrug resistance in bacteria.

HGT is the process by which an organism passes on genetic material to another organism that is not its descendant. This transferred DNA is integrated into the genome and then stably inherited. In recent years, a clear understanding has been formed that HGT is one of the leading mechanisms of bacterial evolution.

The invention of antibiotics

Scientists call the invention of antibiotics the greatest discovery of the 20th Century. Penicillin has put an end to countless infectious diseases that caused high global morality historically.

Today, antibiotics are widely used in the fight against various types of bacteria. However, the vast availability of such drugs eventually turned into a disadvantage that provoked antibiotic resistance.

There are several categories into which antibiotics can be classified, primarily natural and synthetic. The main criterion is the chemical structure of antibiotics based on their mechanism of action against bacteria.

Macrolides, tetracyclines, carbapenems, 3rd, 4th, and 5th generation cephalosporins and some penicillin have a very broad spectrum of activity. They fight so-called gram-positive and gram-negative bacteria, as well as atypical microorganisms

Response from the World Health Organisation

Finding a solution to antibiotic resistance is of high priority for the  World Health Organisation (WHO). In May 2015, the WHO approved the Global Action Plan on Antimicrobial Resistance, which includes antibiotic resistance. The Global Plan of Action aims to ensure the prevention and treatment of infectious diseases through safe and effective medicines.

The global action plan on antimicrobial resistance has 5 strategic objectives:

During a meeting at the United Nations General Assembly in New York in September 2016, heads of state committed to launching broad and coordinated actions to tackle the root causes of antibiotic resistance in several sectors, especially in human and animal health and agriculture.

The member states reaffirmed their commitment to developing national action plans to combat this phenomenon, building on the global action plan.

After completing his bachelor’s degree in market research and psychology in 2019 in New Zealand and Germany, Dmitry moved to London to pursue a career within the healthcare sector to oversee research projects in science and medicine, with a focus on how innovative technologies help drive and shape this industry.