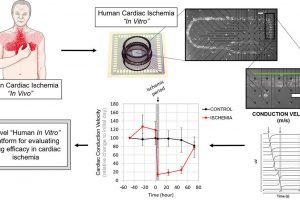 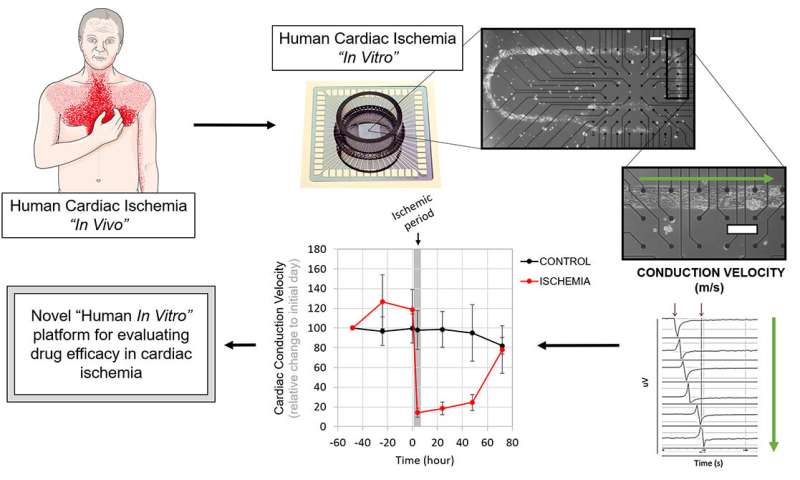 Animal models provide benefits for biomedical research, but translating such findings to human physiology can be difficult. The human heart’s energy needs and functions are difficult to reproduce in other animals, such as mice and rats. One new system looks to circumvent these issues and provide a functional view of how different treatments can help ailing cells in the heart following oxygen and nutrient deprivations.

Researchers have unveiled a new silicon chip that holds human lab-grown heart muscle cells for assessing the effectiveness of new drugs. The system includes heart cells, called cardiomyocytes, patterned on the chip with electrodes that can both stimulate and measure electrical activity within the cells. The researchers discuss their work in this week’s APL Bioengineering.

These capabilities provide a way for determining how the restriction of blood supply, a dangerous state known as ischemia, changes a heart’s conduction velocity, beat frequency and important electrical intervals associated with heart function.

Ischemic conditions have been difficult to mimic in other animals. The heart of a rat, for example, has a metabolism that is more than six times higher than a human heart’s, meaning they face an increased need for glucose faster and can fall into ischemia more quickly.

A key contribution of functional systems based on human cells is the ability to examine how treatments affect the broader function of human tissues.

“You go to the doctor’s office, and they don’t immediately start looking for biomarkers, but that’s how a lot of drug discovery is conducted,” said James Hickman, an author on the study. “Instead, the doctor would essentially ask you, ‘How are you functioning?'”

The group used the chip’s unique ability to determine conduction velocity from electrical activity to study how drugs designed to curb the effects of ischemia affect gap junctions, the tunnels between cardiomyocytes that allow them to propagate an electric signal.

They found the drug ZP1609 lessened the dramatic drop in conduction speed associated with gap junction degradation when the chips were placed in ischemic conditions, echoing findings about the drug in other models.