The human brain, with its 100 billion neurons that control every thought, word, and action, is the most complex and delicate organ in the body. Because it needs extra protection from toxins and other harmful substances, the blood vessels that supply the brain with oxygen and nutrients are highly selective about which molecules can cross from the blood into the brain and vice versa. These blood vessels and their unique network of supporting pericyte and astrocyte cells comprise the blood-brain barrier (BBB). When the BBB is disrupted, as happens with exposure to methamphetamine (“meth”) and other drugs, the brain’s sensitive neurons become susceptible to harmful damage.

Beyond forming a physical barrier, the BBB is thought to directly interact with the brain and help regulate its function, but figuring out exactly how the cells of the BBB and the brain influence each other has been a challenge, as in vitro models (i.e., cells in a dish) are too simplified and in vivo models (i.e., natural human brain tissue) too complex. Now, researchers at the Wyss Institute for Biologically Inspired Engineering have created a “just right” model of the BBB-brain interface using microfluidically linked Organ Chips that reacts to meth like the human brain and allows an unprecedented look into how the brain’s vasculature influences and regulates its metabolic function. The research is reported in Nature Biotechnology.

“Most of today’s research on Organ Chips is focused on trying to increase the complexity of cell types on each chip, but we realized that the brain is already so complex that we couldn’t analyze it on one chip, so we did the opposite and divided one organ onto multiple chips,” said first author Ben Maoz, Ph.D., a former Technology Development Fellow at the Wyss Institute who is currently an Assistant Professor at Tel Aviv University, Israel. “The beauty of this work is that Organ Chips were able to open up another dimension for neurological research that no other method could; decoupling a very dense organ to unveil new interactions between the different structures within the brain.”

The BBB-Brain Chip system consists of three chips: one “influx” BBB Chip, a Brain Chip, and a second “efflux” BBB Chip, physically distinct from each other but all connected with microfluidic channels to allow the exchange of chemicals and other substances between them, much like how the supplying blood vessels, neuronal compartment, and draining blood vessels are linked in the brain. The BBB Chip has one channel lined with endothelial cells through which flows culture medium that mimics blood, separated by a porous membrane from a parallel channel containing pericytes and astrocytes that is perfused with artificial cerebrospinal fluid (aCSF). The Brain Chip has a similar aCSF flow channel that is separated by another semipermeable membrane from a compartment containing human brain neurons and their supporting astrocytes to mimic brain tissue. The three chips’ aCSF channels are connected together in series, creating a fully linked system in which substances can diffuse from the vascular channel across the first BBB into the aCSF, enter the brain neuronal cell compartment, flow back into the aCSF, and ultimately diffuse out across the second BBB into another vascular channel, as happens in vivo.

The team cultured human cells in the linked BBB-Brain Chips and exposed them to meth, which is known to disrupt the junctions between the cells of the BBB in vivo and cause it to “leak.” When meth was flowed through the blood vessel channel of the BBB Chip, it compromised the junctions of the BBB’s vascular endothelial cells and allowed the passage of molecules that normally wouldn’t be able to cross the BBB into the Brain Chip. This experiment confirmed that the model worked, and established that it could be used in research to better understand drugs’ effects on the human brain and develop treatments.

In addition to the meth-exposed chips, something in the chips that were not exposed to meth also caught the scientists’ attention. They realized that the proteins expressed by the cells on BBB and Brain Chips that were fluidically linked were different from those expressed by cells on unlinked chips. For example, cells in all of the linked chips expressed higher levels of metabolism-associated proteins and lower levels of proteins involved in proliferation and migration than cells in unlinked chips, suggesting that the different cell types do in fact help each other maintain proper function.

“Blood vessels are frequently thought to just be a barrier or a transporter of chemicals. But when we looked at the linked BBB-Brain Chips, we noticed that there seemed to be some crosstalk between the endothelial cells and the neurons,” explained co-author Anna Herland, Ph.D., a former Postdoctoral Fellow at the Wyss Institute who is now an Associate Professor at the Royal Institute of Technology and the Karolinska Institute in Stockholm, Sweden. “We also know from studies of long-term meth abusers that this drug affects the brain’s metabolism, so we started to dig deeper to see if we could characterize the metabolic link between the BBB and the brain.”

The modular nature of the BBB-Brain Chip system allowed the researchers to analyze all of the molecules secreted by the individual cell populations alone, and then connect the chips to trace where those substances traveled. The chemicals secreted by the cells on the uncoupled BBB Chip were largely related to neuron maintenance and protection, demonstrating that the molecules produced by the BBB provide chemical cues to neurons. 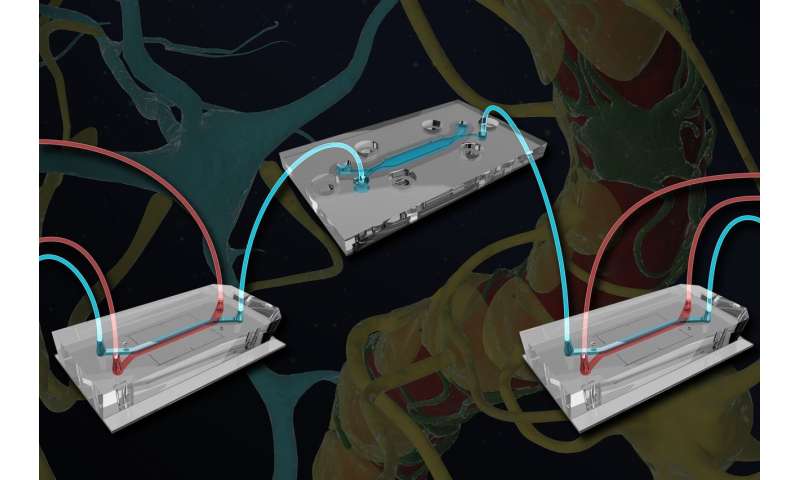 To determine the influence of the endothelium on metabolites in the brain, the scientists administered radioactive carbon-labeled glucose, pyruvate, or lactate as an energy supply to Brain Chips that had been decoupled from the BBB chips, and found that the production of both glutamine and the neurotransmitter GABA was lower in unlinked Brain Chips than in Brain Chips linked to the BBB. Intriguingly, this finding demonstrated that products of vascular endothelial cell metabolism become substrates for the production of neurotransmitters that mediate neuronal cell information processing in the brain, suggesting that the health of our blood vessels could have a direct impact on mind function.

“The big breakthrough here is that we have teased out communication networks between cells in a way that never could have been done with traditional brain research techniques. In vivo studies simply do not offer the granularity to determine how complex these metabolic networks function in heterogeneous cell populations within living tissues,” said corresponding author Kit Parker, Ph.D., a Core Faculty member of the Wyss Institute and the Tarr Family Professor of Bioengineering and Applied Physics at the Harvard John A. Paulson School of Engineering and Applied Sciences (SEAS). “We are seeing here an unanticipated level of complexity that raises the bar in terms of what it will mean to successfully map the brain’s connectome.”