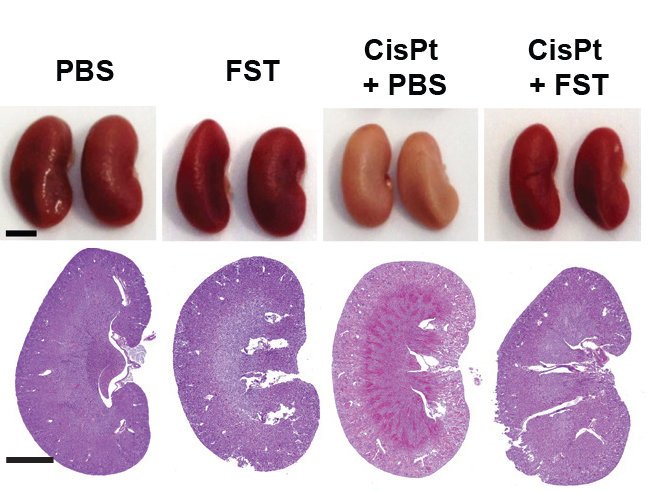 A naturally occurring hormone could help make chemotherapy much more effective for many Australians with lung cancer, according to new findings from Sydney and Melbourne researchers.

And the hormone—known as follistatin—also appears to prevent kidney damage, a serious side effect of chemotherapy.

The promising new ‘two birds, one stone’ treatment approach, which was successful in mice, is published in Science Translational Medicine today. It is the result of a collaborative effort between researchers at the Garvan Institute for Medical Research (Sydney) and the Hudson Institute of Medical Research (Melbourne), along with the biotechnology company Paranta Biosciences Limited, which is developing follistatin as a potential therapy for cystic fibrosis, kidney disease and cancer.

Despite advances in immunotherapy for lung cancer, most patients are still treated with chemotherapy based on a drug called cisplatin. However, less than a third of these patients will see benefits, and they often develop serious side effects including kidney damage.

In an effort to improve outcomes for lung cancer patients, Professor Neil Watkins (Petre Chair in Cancer Biology, Garvan) and his team, including Dr. Kieren Marini (Hudson Institute), discovered that a protein called activin is a culprit in both chemotherapy resistance and chemotherapy-induced kidney damage.

“In chemotherapy-resistant tumours in mice, activin gets switched on in response to the damage caused by chemotherapy,” says Prof Watkins. “Cancer cells can then enlist activin to protect themselves. At the same time, when activin is switched on, it promotes kidney injury.”

Luckily for Prof Watkins (who began the research at Hudson Institute), the key to blocking activin happened to be across the hall. 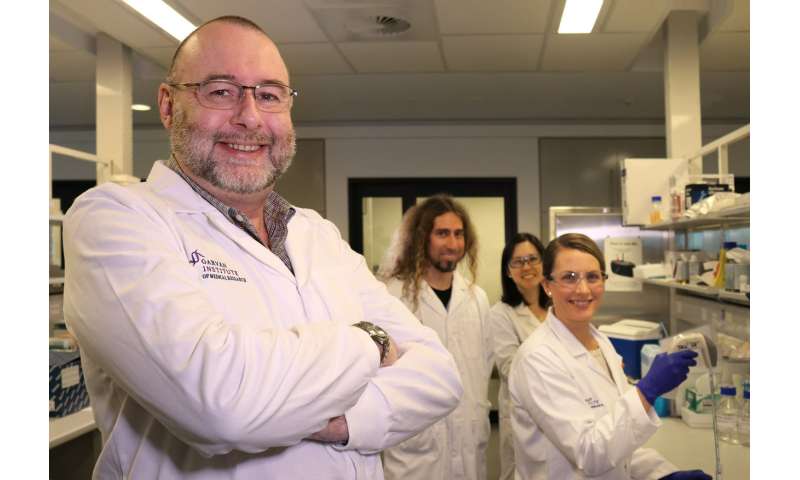 “Good ideas come from the most unexpected places, ” says Prof Watkins. “We spoke to one of our neighbours, and that neighbour was none other than Professor David de Kretser, one of the pioneers of reproductive biology in Australia.”

In the 1980s, while at Monash University, Professor David de Kretser discovered the naturally occurring hormone follistatin—which blocks activin. He founded Paranta Biosciences in 2011 to develop follistatin for clinical use, specifically in the treatment of inflammatory and fibrotic diseases.

“As we discussed our results in lung cancer, he suggested we try follistatin in mouse models” says Prof Watkins “and the rest is history.”

Prof Watkins and his team put follistatin to the test. They found that, in mice, treatment of follistatin in combination with platinum chemotherapy caused lung tumours to shrink and more animals to survive longer. Remarkably, they found that kidney damage was also prevented.

“Discoveries like this one—a combination therapy that actually reduces damage while improving effectiveness of chemotherapy—are exceedingly rare in cancer research,” says Dr. Marini, who undertook the research as part of his Ph.D. at Hudson Institute.

The pioneering research performed by Prof Watkins and his team in collaboration with Paranta Biosciences has laid the foundation to move this combination strategy to a clinical setting.

“Many of us have heard about the devastating side effects of chemotherapy in cancer patients. Our discovery has the potential to not only increase the effectiveness of platinum chemotherapy, but also give patients a better quality of life by preventing kidney damage,” says Dr. Marini.

For Prof de Kretser, a Hudson Institute Distinguished Scientist and the Governor of Victoria from 2006-2011, these results provide a great example of the remarkable benefits of reaching across disciplines. “I could never have predicted,” says Prof de Kretser, “that as a reproductive endocrinologist, someday I would end up working in inflammation and tissue repair.”

Prof Watkins says the use of follistatin is likely to be a safe and effective approach to making chemotherapy more effective in lung cancer.

“Because follistatin is a hormone already found in the human body, there is much less potential for toxicity than with other drugs used to reduce chemoresistance.”

Prof Watkins now plans to study other tumours where platinum chemotherapy is commonly used, such as bladder and head and neck cancers.

In thinking about the serendipitous circumstances that led to this discovery, Prof Watkins has a message for all scientists: