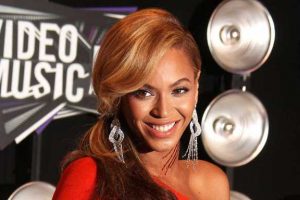 Bumping along! MTV’s Video Music Awards have become a popular place for pregnant stars to showcase their budding bellies.

In fact, Laura Perlongo has done it twice. In 2016, the Michigan native’s bare baby bump was on display in an unzipped green jacket, a silver body chain and black pants. Her husband, Nev Schulman, cradled her stomach and knelt down to kiss it while wearing a matching green button-up.

Two years later, when Perlongo was pregnant with her and the Catfish star’s second child, she opted for a tamer maternity look, pairing a red pantsuit with a white crop top and black heels.

The couple, who share Cleo and Beau, aren’t the only parents who have turned the VMAs carpet into a makeshift maternity shoot. In 2011, Beyoncé announced that she and Jay-Z were expecting their first child without saying a word. Queen Bey simply put her hands around her baby bump in an orange gown and smiled for the cameras.

Inside the show, the “Love on Top” singer began her performance by saying, “Tonight I want you to stand up on your feet. I want you to feel the love that’s growing inside of me.” When the song ended, she unbuttoned her blazer and rubbed her stomach.

“I put a lot of thought into how I wanted to unveil it,” the former Destiny’s Child member told Harper’s Bazaar later that same year. “It was important to me that I was able to do it myself. I was extremely nervous. It was the toughest red carpet I ever did … I decided to say nothing and proudly show my baby bump. I felt it was more powerful to see the love and enthusiasm as opposed to saying anything.”

Keep scrolling to take a look at other celebrity moms who have rocked maternity looks at this iconic red carpet over the years.