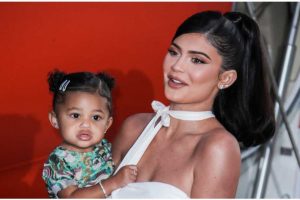 Yesterday Keeping Up With The Kardashians star and Kylie Cosmetics titan Kylie Jenner delighted her millions of fans with a throwback pregnancy pic. She posted the shot of herself, pregnant with daughter Stormi, now almost 2, on Instagram.

Throwback🤰🏻pregnant with my baby girl. I can’t believe my daughter will be two soon..🖤 #stormi

Jenner captioned the portrait, “Throwback… pregnant with my baby girl. I can’t believe my daughter will be two soon… #stormi.”

More than a few commenters took one look at the post and mistook it for a new pregnancy announcement.

One wrote, “omg I thought you were pregnant again! I was about to be shook!”

Another commented, “How many of us almost freaked tf out?”

She posted another one back in October:

i have so many belly photos but this one has always been one of my favorites. baking my little baby storm was such a special time in my life.. i actually became so much stronger and independent throughout the entire experience. women really are amazing.. tag a strong woman in your life 💓 @krisjenner

Commenters have speculated that the posts may suggest that Stormi might have a sibling on the way in the not-so-distant future.

In fact, in June, at sister Khloe Kardashian’s birthday party, there was some brouhaha on social media when a guest sounding much like Jenner was overheard saying, “I’m pregnant!” Is Jenner already pregnant and keeping it under wraps — a second time around?

Jenner and then-beau Travis Scott welcomed daughter Stormi on Feb. 1, 2018. Jenner famously managed to keep her pregnancy a secret — quite a feat for anyone in the Kardashian-Jenner circle.

“I’m sorry for keeping you in the dark through all the assumptions. I understand you’re used to me bringing you along on all my journeys,” Jenner wrote in an Instagram post shortly after Stormi’s birth. “My pregnancy was one I chose not to do in front of the world. I knew for myself I needed to prepare for this role of a lifetime in the most positive, stress free, and healthy way I knew how….”

She continued, “Pregnancy has been the most beautiful, empowering, and life changing experience I’ve had in my entire life and I’m actually going to miss it… I appreciate my friends and especially my family for helping me make this special moment as private as we could.”

We have a hunch something’s up. At the very least? We think Jenner’s feeling a bit broody. She’s made no secret of her love of being a mom… and something tells us she won’t be stopping with one child. Especially not when she makes ’em this darn cute.