The #MyLastShot Gun Violence Campaign Is Breaking Our Hearts: Here's What Parents Need to Know 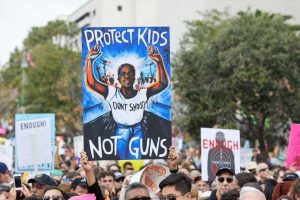 We have no major problem with most of the teen trends of this decade: dabbing, GIFs, bottle flipping, TikTok. But one youth trend is tearing our hearts in half — and once again reminding us that the U.S. has lost all semblance of innocence when it comes to our kids. Started by Columbine students — the Columbine that suffered one of the deadliest mass shootings in U.S. history in April 1999 — the #MyLastShot campaign empowers teens via a small sticker that they can place on their phone, ID, wallet, or even an ear buds case. The sticker reads, “In the event that I die from gun violence, please publicize the photo of my death.” Gulp.

As reported by HuffPost, thousands of kids are now using these stickers as a last-ditch shock-value effort to get lawmakers to take action — and the discussion rages online as to whether or not there’s any effectiveness to them.

The website for the campaign reads, “We’ve become numb to the stats. Orlando 49, Vegas 59, Parkland 17 — numbers that lack humanity. And progress isn’t made through censorship. It’s made when we see humanity at its worst and together bring out our best. Because in order to find a solution, we have to see the problem. Even if it’s hard to face.”

Your final photo can save lives. Get your #MyLastShot sticker and take a stand today. @ethanjsomers

It’s not just teens supporting their peers in this endeavor. Rep. Eric Swalwell (D.– Calif.) is firmly behind the students supporting the #MyLastShot campaign. He tweeted, “A high schooler showed me this sticker on her phone. I’m not in this to stand up to the @nra, I’m in it to knock them out of the ring. #EndGunViolence.”

Predictably, Twitter’s reaction to Rep. Swalwell’s support for the youth campaign was mixed. For instance, one Twitter user responded positively to Swalwell, saying “It’s horrific. Yet, if the public ever saw the photos of school children with their guts ripped out, and their faces shot half off by high velocity rounds shot from a military assault rifle, the NRA would be shut down forever.”

But another Twitter user replied to Swalwell, “California has tyrannical gun control and shooting was in a gun free zone. You placed all those sheep out there as easy prey for the wolves.”

This person seemed to be referring to the Gilroy Garlic Festival shooting on July 28, 2019. For the record? It’s a troll move to suggest that people attending a garlic festival were “easy prey” — and thus somehow at fault for a mass shooting that killed four and wounded more than 10 others.

Where did the movement come from? According to HuffPost, Kaylee Tyner — a Columbine student and one of the creators of the #MyLastShot campaign — said that the Columbine mass murder that happened long before she was ever a student at the high school was psychologically damaging to her and her classmates nonetheless.

“Some days, it was all I could think about, especially when there was a school shooting in a different part of the country or when I saw people taking photos of my school as if it was a tourist attraction,” Tyner said to HuffPost. “One day, our school even had to go on lockdown after someone made a threat.”

Tyner and her classmates argue that they wish for their deaths to be politicized should they perish in a mass shooting, in hopes that any grisly photos of their bloody bodies could move legislators to finally address gun control and reform in the United States.

Tyner’s peer and “MyLastShot” co-creator, Emmy Adams, said, “The youth of America are dying at the hands of our leaders’ inaction and if they’re not willing to face this reality, we will show it to them… Graphic images can spark change and ignite a fire inside people.” She herself became a gun control activist after seeing the horrifying videos that the Parkland, Florida students took on their phones during the school shooting last year.

I don't normally share stuff like this but in my heart I can not ignore this. Our children are telling us that we need to make changes, and we need to listen. They are telling us that they are sick and tired of being slaughtered, and it's time we stood behind them and showed them we are listening. So it is with that in mind that I am going to join the #MyLastShot pledge. If I am ever found to be the victim of gun violence I want the photos of my body publicized and broadcast as far as it can be. Our children should not have to fight this battle alone! Our children should not have to fight this battle at all! @_mylastshot

We’re devastated that it’s come to this: our children begging that postmortem images of themselves be shown in hope of gun reform. And yet, would even that be enough? A tweet by British journalist Dan Hodges comes to mind:

Hodges wrote of the terrible elementary school attack at Sandy Hook, “In retrospect, Sandy Hook marked the end of the U.S. gun control debate. Once America decided killing children was bearable, it was over.”

In light of how little has been done to stop these ongoing gun violence massacres, we fear Hodges may have been right.

I Lost My Eye in a Random Act of Gun Violence. Here's What I Need People to Know

Everything You Need to Know About Kids & the Flu Shot
#MyLastShot, Breaking, campaign, Gun, hearts, Here's, Is, Know, need, our, parents', the, to, violence, what
Latest Posts