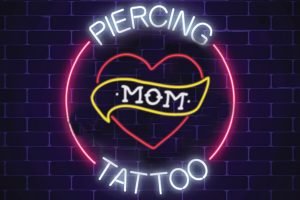 Becoming a parent might not seem like the most obvious time to get new ink or a new piercing, but it’s actually a fairly common reaction.

“A lot of new parents find themselves feeling like, ‘This giant thing just happened, and I feel like I should be different. How?’ In a way, sometimes getting tattooed acknowledges that,” Scott Campbell, co-owner of Saved Tattoo, tells SheKnows. Campbell says many, many people get their first-ever tattoo to honor their child.

So, if you’re a new or expecting mom who wants to get a piercing or tattoo during this exciting time, what should you know health-wise?

First, choose your timing wisely. Doing any kind of body modification during pregnancy is not generally allowed. “My shop has a policy of not tattooing pregnant women,” says Campbell. “It’s not something there’s a lot of research on — we’re more going off urban legend and hearsay and what the old-timers taught us — but it’s a very long-standing part of tattoo ethics,” he explains.

Bruno Levy of Bandit Studio says they also do not tattoo pregnant women. In addition to concerns over infection, Campbell tells SheKnows there’s also a risk that the stress and adrenaline rush of the process will trigger labor, which can be very dangerous.

The rules about piercing are the same. “We just don’t want to risk any kind of infection since the baby shares mom’s blood stream,” Keylan Levine, a piercer at New York Adorned, tells SheKnows.

Generally, there is no additional care required for healed piercings during pregnancy, but if you have a navel piercing, you’ll probably want to take out the jewelry. “If you leave the jewelry in, that can misshape the piercing,” explains Levine. “But as long as the piercing is healed, you can generally put the ring back in once you’ve had the baby.” Levine also says — because for some people the piercing will close up without something in place — if you’re concerned about an existing navel piercing, contact your piercer, and they can help outfit you with a safe plastic insert to maintain the hole without constriction or discomfort.

After delivery, the guidelines for getting tattoos and piercings while breastfeeding are a little different. “I’ve never heard of any adverse effects from tattooing and breastfeeding,” says Campbell. “Aside from the philosophy that the emotional state of the the mom can get passed on chemically through her milk.” Campbell explains that getting a tattoo can sometimes cause very high anxiety, so if you subscribe to that theory about breast milk’s emotional properties, it might not be the best time to get inked.

“But generally, people who are breastfeeding are not going to get an enormous five-, six- or seven-hour tattoo session. Usually, moms are profoundly moved by the new chapter of life they just entered, and they want something small to honor this bundle of cuteness. With a 20- or 30-minute tattoo like that, I personally don’t think that amount of stress would affect the breast milk in any significant way.”

Piercing-wise, breastfeeding is not a great time to get anything new. “I’ve been piercing for 15 years, and I know from clients that the hormonal response to breastfeeding can cause swelling in piercings [that aren’t fully healed],” says Levine. This can delay healing further and make the process more complicated, so it’s best to wait. For most piercings, the Association of Professional Piercers recommends a three-month waiting period after delivery to get a new piercing done to allow the body to return to “hormonal equilibrium.”

Nipple piercings, of course, likely require a longer wait (until breastfeeding is over, that is). It’s not that they are bad: “In our collective, massive experience, we have no awareness of even a single case of a woman who wished to breast feed and could not as a result of having had a nipple piercing,” says the official statement of APP. Most women just remove their jewelry and are able to feed without complication. But while nursing with a nipple piercing is totally possible — as Levine explains, the holes essentially just create additional pores for milk to come out of — to get a new nipple piercing, the APP suggests moms wait three months after finishing nursing, which would mean 15 months after delivery if you’re following the American Academy of Pediatrics guideline to nurse for one year.

Campbell had some last words of advice for new parents considering a portrait of their babe for their ink: “Babies all look the same in tattoos!” he says with a laugh. “If you want their face, wait ’til they get older and have more distinctive features.”

Service dogs for anxiety: Everything you need to know