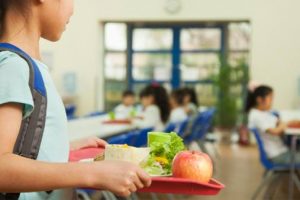 If you needed more proof that no good deed goes unpunished in 2019, well, look no further this morning: A New Hampshire cafeteria worker, moved by the plight of a hungry child, gave the child a hot school lunch. The child’s account was in arrears. Was the worker rewarded? Oh, hell no. She was promptly fired — and accused of $8 worth of theft. If these aren’t End Times, we’re not really looking forward to it getting much worse, people. Especially when it comes to lunch-shaming.

Her name is Bonnie Kimball, and she worked in the lunchroom at Mascoma Valley Regional High School for almost five years. Kimball apparently knew all the kids well and assumed she was doing the right thing by feeding the boy in question until his account could be sorted out.

Kimball alerted the boy to the situation privately when he added a few extra lunch items (“a la carte” items) to his lunch tray. She told him to let his mom know it was time to add some money to his lunch account. But that day, an actual spy was on hand: a manager for Kimball’s employer, Cafe Services (can’t make this stuff up). The Cafe Services manager overseeing the lunchroom that day noticed the exchange and reported it to Kimball’s boss.

Cut to the next day, when the student paid his lunch bill and this all should have been done and over with. Not so fast; this is 2019, remember? Despite the bill being paid to satisfaction, Kimball was hauled into the school office by two managers later in the day and fired over the incident and feeding the boy before his $8 tab had been paid the day before.

Kimball spoke with UnionLeader.com. “I was doing what I was told to do. We weren’t supposed to pull [take] trays,” she said. Kimball explained to the site that she had been instructed to allow kids to eat as necessary while quietly letting them know their accounts needed payment.

Two other lunchroom employees at Mascoma High School quit their jobs in protest of the treatment of Kimball.

The chairman of the school board, Cookie Hebert, told UnionLeader.com that Cafe Services must make sure the policies of the school district are followed to the letter — and here’s the loophole they used to fire Kimball: The policy that kids can eat lunch allegedly does not cover “a la carte” items, only the basic school lunch.

The school district thus far has taken a most cowardly stance to Kimball’s firing. The district employees refuse to comment on Kimball’s job loss beyond repeating that Cafe Services was technically Kimball’s employer, and she was not *actually* a school district worker. Uh huh.

Valley News was able to obtain a copy of a letter verifying that Cafe Services has no plans to reinstate Kimball at Mascoma High: “On March 28, a District manager was on-site and witnessed a student coming through the line with multiple food items that you did not charge him for. This is a strict violation of our Cash Handling Procedures, the Schools Charge Policy and Federal Regulation governing free meals.”

We cry foul. Loudly. There’s a GoFundMe set up for Bonnie Kimball to assist her with any legal fees or lack of income, but sadly right now the fund is only at $390 out of a $20,000 goal — hardly a promising start to help her make up for sudden unemployment.

New Hampshire, meet New Mexico. You could learn a thing or two.

This Is How to Get Your Kid to Sleep

Prince Harry Wants 'Fortnite' Banned, is Clearly a Dad Already
a, America, Cafeteria, Everything, feeding, Fired, for, Getting, Hungry, Is, Kid, That's, This, with, worker, wrong
Latest Posts