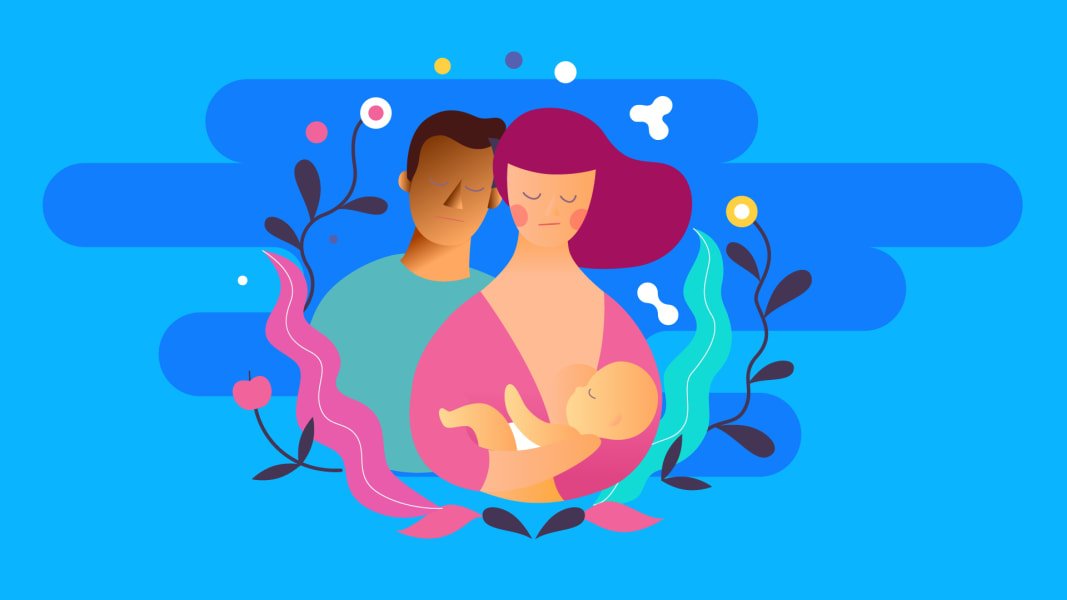 I’ve always wanted to have kids. I love them. I loved the idea of being a mom. But whenever I imagined my own future experience of motherhood, I pictured myself with a 2-year-old toddling around on the playground or taking an excited 9-year-old back-to-school shopping. I do not love newborns.

I was open about my disinterest in new babies while I was pregnant. Every time I told someone about my lack of excitement for those first six months, they’d say the same thing. “Oh, it will be so different when it’s yours!”

My own dad sounded vaguely concerned once when I mentioned my indifference. He seemed to think it was bad juju to say out loud that I wasn’t looking forward to my child’s infancy. When he said, “It will be different when it’s yours,” it wasn’t a reassurance; it was almost a command.

I heard it so often, I started to believe it.

Media — both social and the Hollywood kind — sent a very clear message: The second I am handed my baby, my world will change. I will be filled with a love I never knew existed. My heart will burst open at the seams, as though the doctor is passing me a physical manifestation of love itself. I will be overjoyed. My life will be complete.

I hung onto these thoughts, letting them propel me through the rising concern that came with my approaching due date and the knowledge that a strange bug-eyed, alien-looking newborn wailing at me was approaching ever nearer. I stayed awake late into the night during my third trimester reading The Happiest Baby on the Block, feeling oddly reassured that the colicky period tended to only last until about 8 weeks. "Maybe I’ll start liking this sooner than I thought," I’d muse. But nothing made me excited to have a 3-week-old.

When my daughter was born, I knew right away that it was not “so different” just because she was mine. My immediate emotions were all directed inward: intense relief that labor was over, swelling pride that I had done it on my own (a vacuum had loomed perilously close to me during the final minutes of pushing). Then, underneath that, I identified how I felt about my baby. But I knew that it wasn’t love.

I only recognized what it was because of something one of my best friends had told me when her daughter was born two years earlier. “I wouldn’t say I loved her right away,” she said about her then-4-week-old. “It was more like a sense of obligation.”

The word floated into my mind from my hospital bed. Obligation was exactly what I felt. It was a sense of duty, which actually dovetailed nicely with the pride I felt; this was an occasion I would rise to willingly and handily. But even in my delirious state post-labor, I knew that if my friend hadn’t normalized it by sharing her own experience with me, all I would have noticed was the absence of that world-shattering love. I would have felt like a monster.

I’d never heard another mom confess to not feeling love right away — though I suppose “our hearts are bursting with obligation” is a pretty terrible Instagram caption. But when I posed the question to other mothers, I was surprised (and a little relieved) that many of them didn’t get that delivery room rush either.

“I definitely did not feel the love at first sight that my mother and many other mothers told me about,” Patricia told me. “There were so many emotions when I gave birth: pain, confusion, amazement and shock. I remember wondering if it was normal to feel the way I did.”

Liz said something similar: “It sounds horrible, but the love for both of my children didn’t really root until maybe 3 months. Once their vision was better and they could interact a bit with me, then I could really feel the love for them.”

I hated that these women felt like they had to couch their explanations to me. It shouldn’t sound horrible; in fact, it’s not unusual at all. “It’s totally normal to feel this way,” Sasha Taskier, an associate marriage and family therapist in Chicago who specializes in the transition to motherhood, tells SheKnows. “Love takes time. Love takes a relationship. Newborns aren’t the most responsive beings. There is a dominant narrative that the second your baby comes out you will love it immediately, but we know that is just not true for so many parents.”

One of the things that made me feel less, um, dead inside was that my husband also wasn’t head over heels from day one; Taskier says it’s common for fathers to take even longer than mothers to bond with their babies. I was a little hesitant to confess how I felt — or rather, didn’t feel — but when I learned he was on the same page, it almost became a joke between us. “Do you think you love her yet?” “Hmm, not today!” (Incidentally, we had this same joke about our dog, which I loved the second we found her, whereas and my husband took about three weeks to come around. In my defense, our dog was 4 when we got her. I think newborn puppies are kind of weird too.)

Maybe our schtick was a little dark, but it made me feel so much less wrong during those terrifying first weeks. But many of the moms I talked to didn’t feel like they could share their own slow-growing love with anyone, even their partner, because of judgment and stigma.

Patricia, for one, explained that her husband did feel love instantly, which was particularly alienating for her. “I didn’t feel like I could talk to anyone about it — at least anyone that had kids,” she said.

“[My husband] still doesn’t know,” Shira said. “It’s very taboo and people are judgmental. Honestly, [at the time,] I was scared people would say I had [postpartum depression].”

More: 7 Surprising Tips to Survive the First 6 Months of Parenthood

But if you can talk about it, you should: Taskier stresses that it’s important to be honest about your emotions during this time, especially with your partner. “Go to them with honesty and vulnerability," she suggests. "Say, ‘I’m really ashamed that I feel this way right now, and I want to know how you feel.’" And she reminds new moms that your partner doesn’t have to be your only outlet. “There are a lot of support systems out there where women can share their ‘darker’ fears — professionals like lactation consultants or postpartum doulas are with you in such intimate moments, they have undoubtedly heard it all. They can refer you to a moms group — an amazing way to connect and share some of these experiences — or even a therapist.”

Bottom line? We’re definitely not alone. And that love? It will come.

I don’t remember the first time I realized I loved my daughter, but I do remember the first time it felt like my heart might burst. I was driving, just me and her (and the aforementioned beloved dog), and I looked in the back seat to see her sleeping. She was almost 12 weeks old. She looked so big — like a real kid. It was everything.