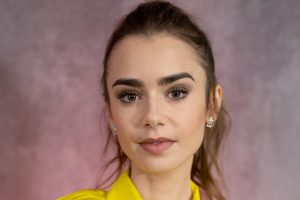 Lily Collins's chocolate-brown hair has been wildly consistent throughout the years. She has switched up the length from time to time; a few years back, she had a chin-length bob haircut and later tried a longer lob with ends that barely grazed her shoulders. Recently, her hair has mostly been a medium length that just reaches the middle of her back. But it looks like she's playing around with different haircuts again with a new set of brow-grazing bangs.

The Emily in Paris star debuted her new haircut via Instagram to the delight of many fans on November 30. In the comments, folks praised her new bangs. One user even commented, "Been waiting for you to get bangs for quite some time haha they look PERFECT."

Collins kept the styling minimal to debut her new cut. The majority of her brown hair is pulled back into a low bun, putting the full focus on her new bangs. These bangs fall right into her eyes with longer pieces on either side of her head, making them curtain bangs, which have been immensely popular lately. They are styled with a slight bump at the ends. The pieces of hair on the sides have a slight wave to them. The tousled look has such a casual vibe that makes her look like she woke up like this (even though we know she didn't).

Even though these bangs fall into her eyes, her signature thick eyebrows are still on display between the pieces of hair. It's not every day that the Pisces changes up her hair, but we are enjoying the long fringe on her and can't wait to see how else she decides to style the bangs.

What Exactly Is Sebum, and Why Is It So Important?