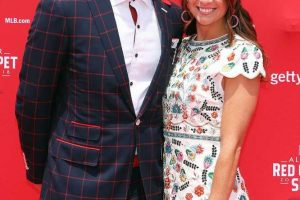 Bryce Harper's first Father's Day was an extra-special one this year!

The Philadelphia Phillies player, 27, announced Monday that he and his wife Kayla are expecting their second child together, a daughter.

"Girl dad!" Harper wrote on Instagram, sharing a photo of the couple surrounded by pink heart-shaped balloons and holding up Kayla's ultrasound photo.

"Evening things out this year with Baby Girl Harper 💗," the mom-to-be wrote in her announcement, sharing a zoomed-out version of the same snapshot. "Coming early December 2020."

The big news comes 10 months to the day after Harper and Kayla welcomed their first child, son Krew Aron.

Who's Due Next? Kasi Wicks, the Bella Twins and 62 More Celebs Who Are Expecting

The high school sweethearts first revealed they were expecting on April 1, 2019, with a romantic photo on Instagram, showing the parents-to-be holding a toddler-sized Phillies jacket with "Harper 3" printed on the back.

"Philly raised little man will be! 💯👶🏼 #BabyHarper," Harper captioned his photo set, which also included another snap featuring the front of the jacket and an ultrasound photo.

Harper wrapped his first season with the Phillies last fall, after signing a 13-year, $330 million dollar contract with the team, according to MLB.com. The right-fielder previously played for the Washington Nationals starting in 2010, before leaving the nation's capital for the Pennsylvania team.

While she regularly shares sweet moments from their life as new parents to social media, Kayla has found herself in a position of being on the defense when it comes to her son, too.

In September — following a game at Harper's former home base, Nationals Stadium, that brought on more heckling than usual — Kayla called fans who heckled her husband by mentioning their then-newborn "classless."

"When you bring his son or family into it, yes you're crossing a line," she said in a tweet. "Stick to your overused overrated and Harper sucks chants if you're really that loser that goes to a game to heckle someone."