Gwyneth Paltrow Celebrates 'Sweetest' Son Moses' 15th Birthday: 'I Love You So Much' 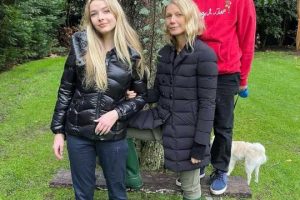 The Oscar winner paid tribute to her son Moses for his birthday on Thursday, calling him the "most brilliant guy ever." Paltrow, who wed Brad Falchuk in September 2018, shares her son with ex-husband Chris Martin, along with daughter Apple, who turns 17 next month.

"Holy Moses I can't believe you are 15 today," the mom writes on Instagram, sharing a close-up shot of her boy plus a photo of him skateboarding. "You are the dreamiest, sweetest, most brilliant guy ever. I love you so much, you can't fathom it. Happy birthday you little shredder 💙"

In January, Paltrow shared on Jimmy Kimmel Live! how her two children were handling being stuck at home during the pandemic. She said Moses had taken isolation the "hardest" among them, though he found an outlet in skateboarding.

"What's great is that he's a skateboarder, so he can do a lot of solo, outside exercise and work on skills and tricks and stuff like that," she said, "but I think it's very hard to be 14 and … it's tough on the ones that are still in the most intense developmental stages, I sort of observed."

"Like, my daughter is 16, she kind of knows who she is and she's got her friends," continued the actress. "My son would have started high school in September. I think it's hard socially. I've also been amazed how adaptable kids are during this time and how agile they've been."

"Hats off to all these kids around the world who are just getting through it," she added. For Moses' 14th birthday last year, Paltrow wrote on Instagram that her son was "the best" and that it was "unbelievable" how quickly he was growing up.

"He is the kindest little man and he has the most unique way of looking at the world and expressing himself. Mosey, I could not be more proud of you in every way," she wrote. "You conquer all you set out to do, you never quit, you are immensely talented and a great friend. I hope you never stop hugging me goodbye when you go into the next room. I love you."