Can eating this type of sugar prevent weight gain? 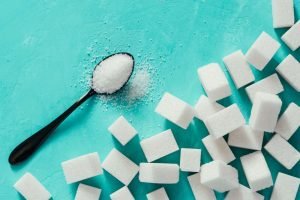 More and more studies are unraveling the multi-layered relationship between our gut microbiome and weight gain.

A few years ago, a twin study that Medical News Today reported on found that genes influence the bacteria that live in our gut, which, in turn, influence whether we gain weight or not.

Another paper proposed that our diets influence our guts’ “power” to decide how much weight we gain.

Belly fat — the most harmful type of fat — in particular is known to be driven by our gut bacteria, but the food that we eat, this study suggested, plays a more important role in these weight-regulating gut processes than genes.

New research brings further nuance to this latter idea. Specifically, a new study looks at how the intake of mannose, a type of sugar, affects gut bacteria and weight gain in mice.

Hudson Freeze, Ph.D., director of the Human Genetics Program at the Sanford Burnham Prebys Medical Discovery Institute in San Diego, CA, led the new research, which was published in the journal Cell Reports.

When we think of sugar, we mostly think of glucose. However, mannose is also a type of sugar with a wide range of applications and effects.

It is used as a treatment for the rare condition congenital disorder of glycosylation (CDG), and for some bacterial infections. However, in other situations and dosages, it can be lethal.

So, the researchers designed a “mouse model of diet-induced obesity.” They randomly assigned 3- and 8-week-old mice to one of the following:

Prof. Freeze and colleagues analyzed the gut microbiota of the mice, looking at the Bacteroidetes to Firmicutes ratio, a measurement of microbiota diversity that has been associated with the lean phenotype.

They also took measurements of the mice’s body weight and blood sugar levels, as well as monitored fat levels in the rodents’ livers and their overall fitness.

The study revealed that the mice that were fed a high-fat diet plus mannose were leaner, had less fat in their livers, were more tolerant to glucose, and had overall higher levels of fitness than the mice that had the mannose-free high-fat diet.

As the researchers explain, glucose intolerance, together with insulin sensitivity, are commonly associated with high-fat diets.

These benefits were reflected in the gut bacterial composition of the mice that received mannose. In fact, the diversity of the gut microbiota in these mice resembled that of lean rodents that had been on a normal diet.

Also, the scientists took mannose out of the rodents’ high-fat diet and re-examined them. The mice then regained weight and their bacterial composition went back to resembling that of obese rodents that did not receive the sugar.

Analyses of gut bacteria also found that mice that consumed mannose processed carbohydrates less efficiently than those that did not, and they also had “higher fecal energy content.” This suggests that they absorbed fewer calories than mannose-free rodents.

Significantly, these benefits only affected younger mice, while 8-week-old mice did not benefit from the sugar supplement. “The gut microbiome is very dynamic in early life,” explains first study author Vandana Sharma, Ph.D.

“These findings further confirm the important role of the gut microbiome in metabolism,” comments Prof. Freeze. “The microbiome partially explains the beneficial effects of mannose, but how exactly it affects the body’s metabolism remains a mystery.”

“Obesity and related diseases, such as nonalcoholic steatohepatitis (NASH),” continues the senior researcher, “are on the rise — and scientists are on the hunt for new treatments, particularly for individuals who are unable to exercise.”

“Better understanding of mannose’s effects on the gut microbiome may lead to new therapies for treating obesity.”

Weight Gain After Quitting Smoking May Up T2DM Risk

15 of the Best Free Online Yoga Videos That Can Save You a Trip to the Studio
Can, eating, Gain, of, Prevent, sugar, This, type, Weight
Latest Posts