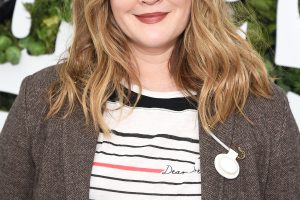 Drew Barrymore has never gone under the knife — and she intends on keeping it that way.

“I have an extremely addictive personality,” the Santa Clarita Diet star, 43, shared during a new interview with Glamour UK, before equating plastic surgery with heroin.

“I feel like they’re both very slippery slopes,” she shared. “I feel if I try either, I’m going to be dead really soon.”

Barrymore, founder of cruelty-free cosmetics line Flower Beauty, went on to explain that she prefers to use makeup to correct any concerns rather than opting for a more permanent option.

“Not messing with my face or chasing some unnatural beauty is a standard I live by,” she remarked. “I have dark circles under my eyes. I was at my dermatologist’s recently who said to me, ‘Can I shoot some Juvederm up there? It will raise the skin and it won’t be so sunken, which is causing the darkness to look worse, because it’s lower than the natural light that is hitting it.’ And I went: ‘No, but I’m gonna go home and start highlighting under my eyes, so thank you for the tip!’ ”

“We’ve gone far too far with the whole thing, especially when people who are so young are doing it,” she shared.

“I feel ageing is a privilege. It’s about how to do it gracefully, with humour, self-love and a respect for the process, and that’s always been really important to me,” Barrymore continued, adding that having daughters made her even prouder of the decision to age naturally. “I thought, thank god these were my initial instincts.”

The actress shares daughters Frankie, 4½, and Olive, 6, with ex Will Kopelman.

Barrymore went on to recommend her own effective alternative to plastic surgery: the “Clear + Brilliant” laser treatment from Dr. Roy G. Geronemus, a dermatologist with offices in New York.

“[The treatment] just schluffs the barnacles of brown and sun damage off your face. It’s the greatest thing ever. It’s non-invasive and there’s no downtime. It’s like microdermabrasion laser, but it always makes me feel so much more attractive,” she remarked.

In keeping with her au-naturale approach to aging, Barrymore is also a fan of posting no-makeup photos online.

Shortly after sharing a sweet makeup-free selfie with pal Cameron Diaz, Barrymore explained why she chose to give the world such an unfiltered look at the Hollywood stars.

“We’d just come from a workout. We feel good. We’re not wearing any makeup, and we’re just being ourselves, she told PEOPLE at Beautycon Festival in July. “And sometimes all makeup and beauty fun aside, it’s just about the raw, honest, post workout look, you know? Just be you.”

Barrymore previously told PEOPLE that she finds it “empowering” to share makeup-free photos on social media.

“That’s what you really look like — and I have no interest in sort of pretending I look something else than what I am,” she said. “I love wearing makeup, but I also love not wearing makeup.”