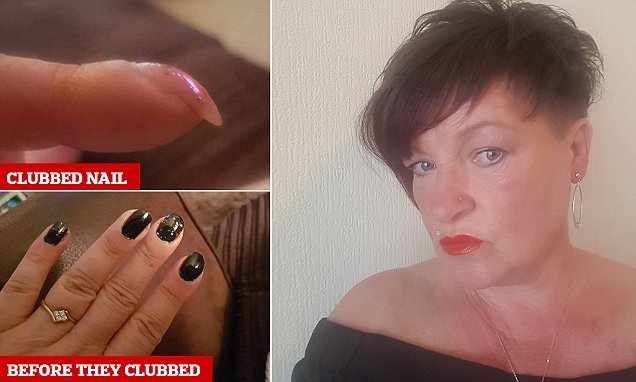 Grandmother, 53, posts a photo of her droopy fingernail… and discovers she has lung cancer when doctor recognises it as a symptom of the disease 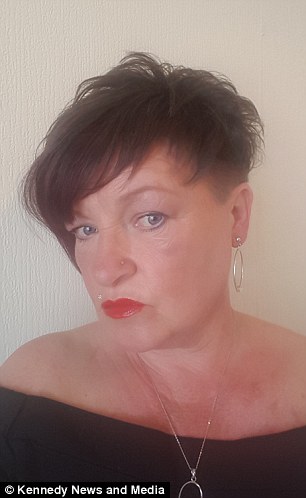 Jean Taylor, 53, of Wigan, felt ‘ridiculous’ going to the doctor to ask about her nails, which curved around her fingertips

A grandmother who just thought she had ‘ugly’ nails was shocked to discover they were actually a symptom of her lung cancer.

Jean Taylor, 53, of Wigan, felt ‘ridiculous’ going to the doctor to ask about her nails, which curved around her fingertips.

But doctors recognised the little-known symptom of lung cancer and sent her for a series of tests, which confirmed their fears.

Ms Taylor credits the quick-thinking medics with saving her life, as scans showed two golf ball-sized tumours in both of her lungs.

Lung cancer survival rates are among the lowest and an early diagnosis is crucial. Ms Taylor was diagnosed with stage one.

She assumed her strange curving nails were a family trait as her mother – who lost half a lung due to cancer – also had them.

It wasn’t until her daughter Stephanie researched the reason behind her strange curving nails that fears of lung cancer were sparked.

Speaking about her ordeal for the first time, Ms Taylor said: ‘These nails are my life savers and I’m not cutting them off.

‘I’d been working in a factory so my nails were really short. I got an office job about six weeks ago and they decided to grow.

‘I’ve always had weak nails and I’ve never got them to this length because they were never strong and I was working in a factory.

She added: ‘My daughter said “god, they’re ugly”. I didn’t want to go to the doctor over a curved nail, but I did it to put my daughter’s mind at rest.

‘She’s the Google queen, and when you Google it the first thing that comes up in big bold letters is cancer.

‘I felt ridiculous going to the doctor over a curved nail. I just thought I was wasting their time.

‘I never in a million years thought it would be this. Never. I just said “I feel stupid, but I’ve come about this” and I held my hand up.’

Ms Taylor revealed that once she was diagnosed, she got a nail technician round to paint them chrome glitter. 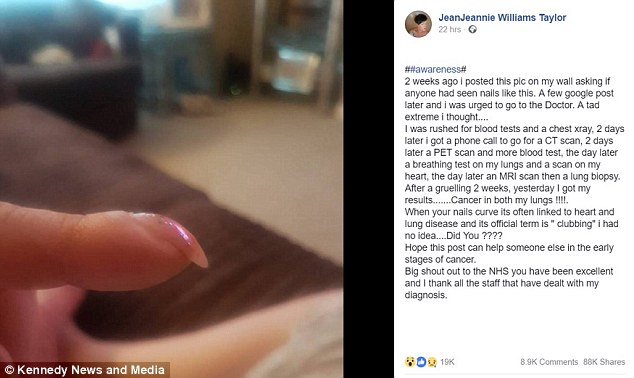 Ms Taylor posted about her clubbed nail on Facebook, which was shared more than 85,000 times, and received more than 27,000 reactions and comments 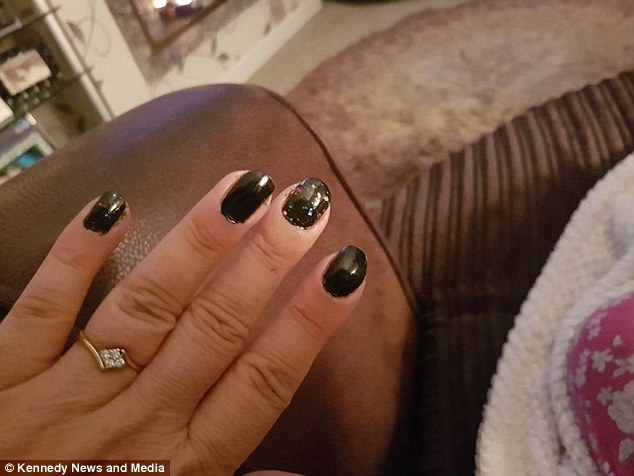 Ms Taylor, who works in a call centre, said: ‘The support [after the post went viral] has been unreal. That feels good’ (pictured: her nails before they turned clubbed)

Her daughter Stephanie, 31, questioned her decision, joking they were ugly enough before she chose the bold colour to paint them.

But Ms Taylor did not care and told her daughter they ‘saved my life’, as only 35 per cent of women survive one year after being diagnosed with cancer.

She added: ‘They’re gonna grow, and if I have to put silver bells and fireworks on the end of them to raise awareness, I will.’

Ms Taylor posted about her clubbed nail on Facebook, which was shared more than 85,000 times, and received more than 27,000 reactions and comments.

And now the courageous grandmother-of-two hopes to raise awareness of clubbed nail in the hopes of saving other lives.

Ms Taylor, who works in a call centre, said: ‘The support [after the post went viral] has been unreal. That feels good.

‘I’ve got so many people sending me shares of their nails, but I’m no expert – I’ve only been diagnosed less than 48 hours.

‘People out there are terrified now and saying “my mum had that and it was never picked up and she died of lung cancer”. 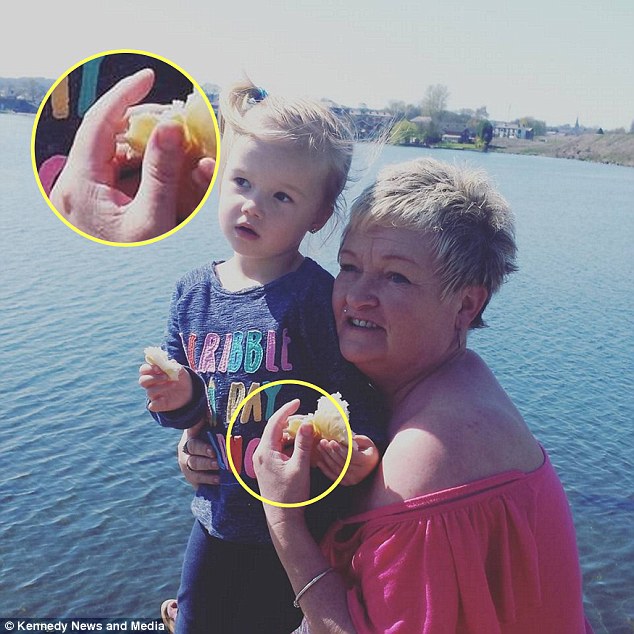 Ms Taylor credits the quick-thinking medics with saving her life, as scans showed two tumours in both of her lungs (pictured with granddaughter Lacey, before her nails turned clubbed)

ARE CLUBBED FINGERS REALLY A SIGN OF LUNG CANCER?

Finger clubbing is when the ends of the fingers become larger and the nail becomes more curved, according to the NHS.

Changes in finger appearance, including finger clubbing, is a little-known symptom of lung cancer, according to Cancer Research UK.

Figures suggest a third of patients with non small cell lung cancer will experience the bizarre symptom. However, rates are lower for other forms of the disease.

Scientists remain unsure as to why clubbed fingers are a sign of lung cancer, but it is thought that the tumours produce certain chemicals and hormones that trigger a build-up of fluids at the end of fingers.

More common signs of lung cancer include a cough that doesn’t go away after two or three weeks, chest infections and persistent breathlessness.

Other less common symptoms include a high temperature, wheezing and shoulder pain, according to charities.

Figures show 46,000 people are diagnosed with lung cancer each year in the UK. A further 35,000 deaths are solely down to the disease.

‘I feel sorry for these people. I want to help. But I’m not qualified to look at anyone’s nails.’

Ms Taylor now believes it’s ‘really important’ that nail technicians are trained in the future to look for clubbed nails on their clients.

She said: ‘They should know about it, because if people are wearing acrylic nails the only time they’re going to have their nails seen is by a nail technician.

‘I think it’s so important for them to know. It could definitely save their [customers’] lives. Whether the nails look ugly or not, they saved my life.’

Ms Taylor went to her doctor for an appointment on July 10, after being begged by her daughter to seek medical advice.

She was shocked when he asked her to go to her local walk in centre for blood checks and chest X-rays on the same day.

In just three weeks, Ms Taylor had a CT scan, a PET scan, an MRI scan, breathing tests, a heart scan and a lung biopsy.

Despite suspecting that it may be cancer, she was terrified when the diagnosis was finally confirmed by a consultant on August 6.

Ms Taylor admitted ‘alarm bells started ringing’ when she was sent for a biopsy, which she was scared of.

She said: ‘I have to say that was the worst four days [waiting for my lung biopsy] I’ve had in my entire life.

‘I’ve never faced fear in my life. I’ve faced every other emotion and dealt with it. But fear was something new to me and I didn’t know what to do. 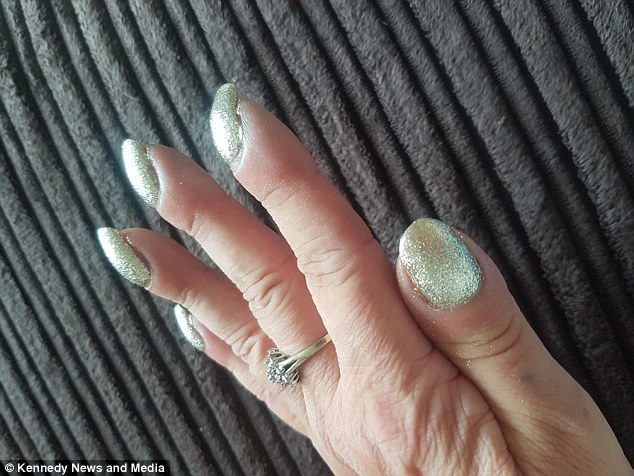 Ms Taylor went to her doctor for an appointment on July 10, after being begged by her daughter to seek medical advice about her curved nails (pictured)

‘All credit to the consultant, I never felt a thing. He was absolutely fantastic. I can’t thank the NHS enough, they’ve been brilliant.’

Ms Taylor was accompanied by Stephanie, her son Aiden, and best friend Christine when she went to hear her diagnosis.

She said: ‘Even though I knew it was lung cancer, to actually hear it confirmed was something else.

‘Then he delivered the shock blow – it’s in both lungs. They’re the size of a golf-ball. He got the scans up on the computer and they looked bigger than a golf ball to me.’

Ms Taylor now faces surgery to remove cancer from her left lung – and is blowing up 20 balloons every night to prepare her lungs for it.

She will then go under the knife again to remove the cancer from her right lung, or faces intense radiotherapy to get rid of it.

But Ms Taylor is optimistic for the future and relying on family and friends to help her through it.

She said: ‘I’ve just been dealt a curveball. It’s a very unfair curveball but somebody has to go through it and I’m just glad I’ve put it out there now.

But Ms Taylor added that she does not ‘plan on going anywhere just yet’.