Mother who took laughing gas has been labelled an unfit mum 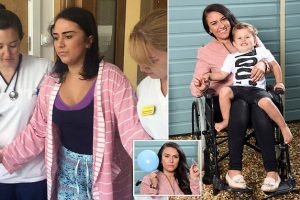 A young mother who has been left unable to walk after inhaling laughing gas at a festival has been sent death threats from online trolls who have labelled her unfit to look after her son.

Mother-of-one Olivia Golding, 24, was rushed to Bristol’s Southmead Hospital four weeks ago after waking up and realising she could not move after taking nitrous oxide (NOS), which is sold in balloons and also known as ‘hippy crack’.

Ms Golding, who had previously taken the drug at parties before taking it at Wireless festival in July, said: ‘People have made me out to be a bad mother and I’m not.

‘People are treating me as if I send my child off to his dad’s to go and get high every weekend but it’s not like that at all.’

Doctors told Ms Golding that inhaling NOS damaged the top of her backbone, which caused her to develop Lichtheim’s disease, also known as subacute combined degeneration of the spinal cord.

Ms Golding, who now relies on her sister to care for her, is speaking out to warn others about the dangers of NOS and how it can impact a user’s family.

Scroll down for video 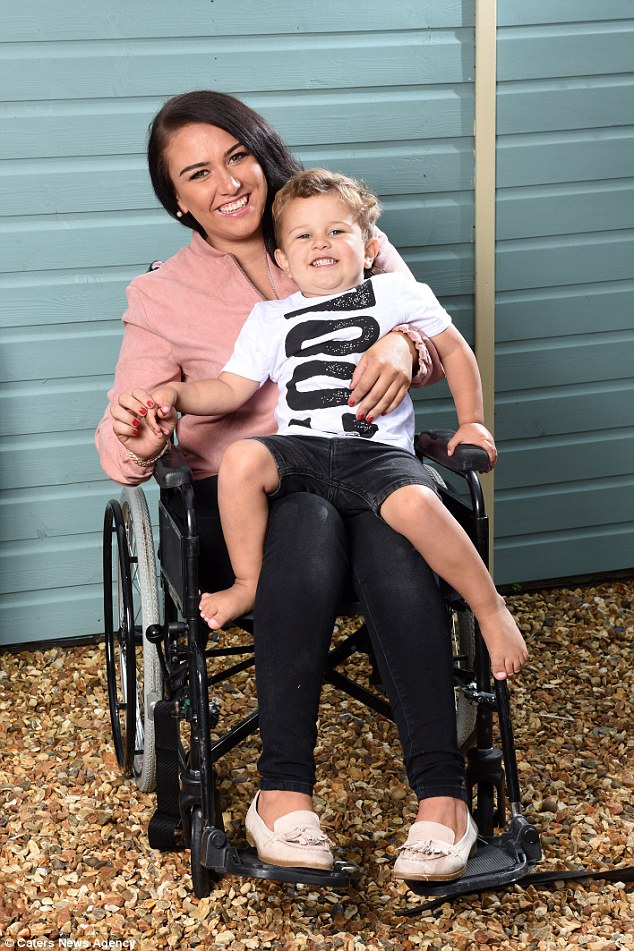 Mother-of-one Olivia Golding has been left unable to walk after inhaling laughing gas. Ms Golding (pictured after the event with her son Parker), admits she inhaled the gas nitrous oxide at festivals and has since been the victim of trolls who have labelled her unfit to be a mother 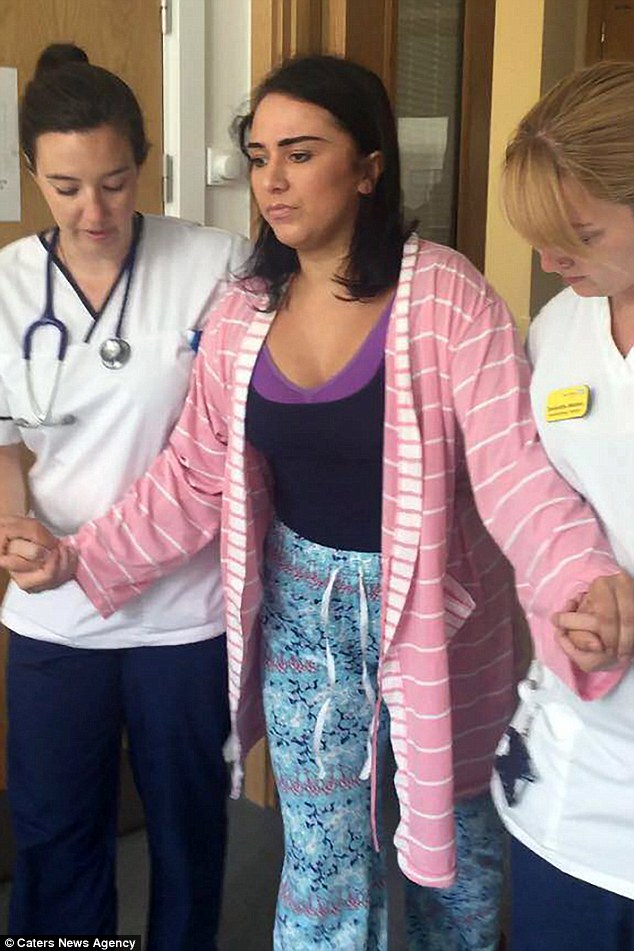 Ms Golding was rushed to Bristol’s Southmead Hospital four weeks ago after waking up and realising she could not move. She is pictured in hospital trying to relearn how to walk 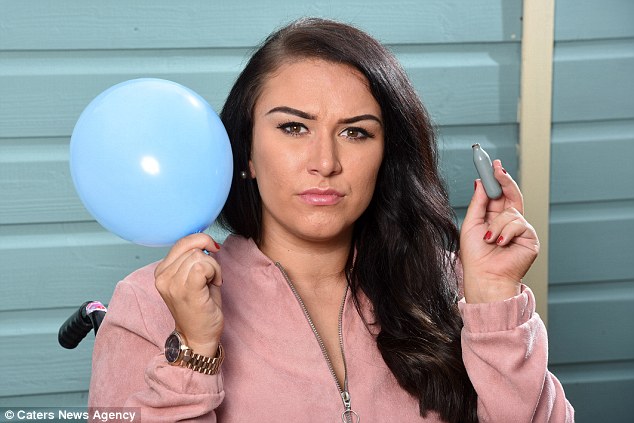 Ms Golding claims that nitrous oxide, which is often inhaled via a balloon, has ruined her life, with her being unable to work, play with her son or live independently. Ms Golding maintains her relationship with her son is ‘amazing’, adding he is what gets her out of bed every day

‘People have made me out to be a bad mother’

Speaking of the online trolls who have targeted her, Ms Golding said: ‘People have made me out to be a bad mother and I’m not.

‘I took NOS for the first time on holiday when I was 17. I took it at a nightclub earlier this year and I had some at Wireless Festival in July.’

She claims her son is the only thing keeping her going, adding: ‘My relationship with Parker is amazing. He knows that his mummy can’t walk at the moment and it makes me feel sad when [he] asks me when I’m going to be able to walk again.

‘It’s destroying me that I can’t play with him. While I was in hospital I felt very depressed.

‘But he’s my determination to get up, otherwise I would stay in bed all day.’ 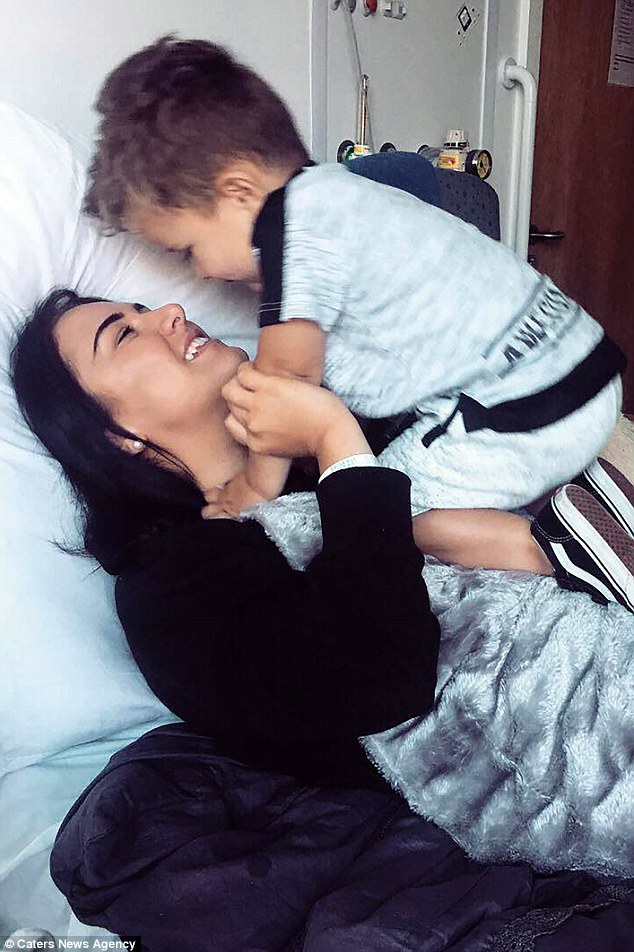 Ms Golding (pictured with Parker while recovering in hospital) claims her son drives her determination to get better. She adds it is ‘destroying her’ that she cannot play with him 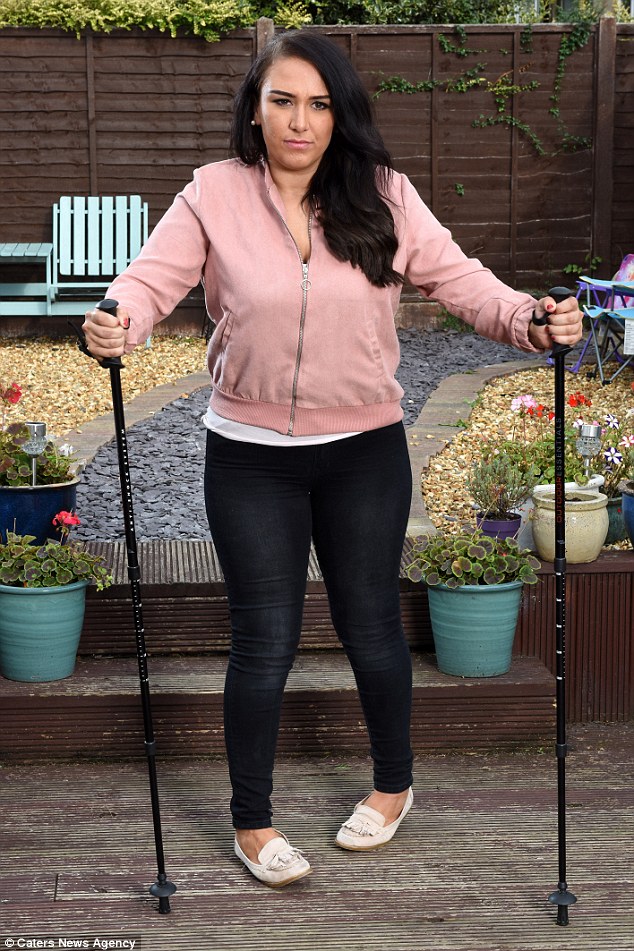 As well as relying on a wheelchair, Ms Golding now uses walking aids when standing. She also requires four drugs a day just to stop her near-constant pins and needles. In addition, Ms Golding’s condition has left her at risk of seizures, forcing her to take epilepsy medication

Lichtheim’s disease, also known as subacute combined degeneration of the spinal cord, occurs due to damage to the layers that surround nerve fibres, usually in the backbone.

Its cause is thought to be due to a severe vitamin B12 deficiency, which may cause abnormal fatty acids to form around cells and nerves.

In rare cases, Lichtheim’s disease can occur due to a complication of nitrous oxide inhalation, which is often used as an anaesthetic.

If treated early enough, Lichtheim’s disease can be curable.

Therapy usually involves vitamin B12 injections into a patient’s muscle until the deficiency is fixed, which typically takes a week.

A patient may then require such injections just once a week or month.

She said: ‘About a month before I was doing a balloon and I got pins and needles in my neck and back. I started feeling numb in my body. But I never dreamt it was the balloons so I just carried on doing them.’

Since losing the ability to walk, Ms Golding now experiences pins and needles almost constantly and takes four drugs a day just to control the sensation.

The ordeal has also battered Ms Golding’s confidence. She said: ‘I’ve not been out in public since being discharged from hospital because I’m scared.

‘I’m scared about crossing the road and scared of not being able to use my wheelchair properly because I have little feeling and control of my arms.’

On top of everything else, Ms Golding has also suffered multiple other complications.

She said: ‘Taking NOS attacked the nerves in my body, causing a B12 deficiency and a block in my brain.

‘I can’t use my limbs properly at all. I’m not paralysed, in my head I know I need to move my limbs, but my brain is not connecting properly to the nerves.

‘The drugs ease the pain but not completely. I will wake up in the morning and I feel like my body is buzzing from the pins and needles.

Ms Golding now requires specially-designed walking aids to help her stand and takes a daily cocktail of five nerve drugs, including a B12 supplement and medication to treat epilepsy. 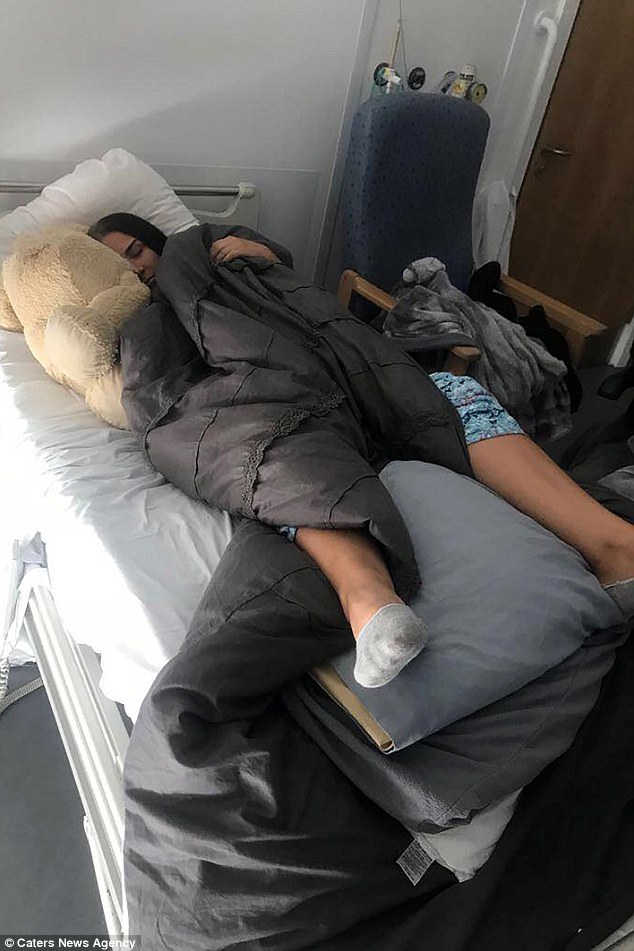 Ms Golding spent weeks in hospital, where she was diagnosed with damage to the top of her spinal cord. Nitrous oxide attacked the nerves in her body and caused a blockage in her brain

‘This whole thing has left me devastated’

Ms Golding was rushed to hospital on August 3 after waking up unable to feel her legs.

Since being diagnosed, she claims she would never have touched NOS if she had known its life-changing consequences.

Ms Golding said: ‘A lot of people think it’s like helium but it’s not. The high you get from it lasts 10 seconds. I can tell you it is not worth that 10 second high.

‘NOS is so easily accessible, it’s sold readily in shops, outside nightclubs and at festivals for £5 a balloon!

‘This whole thing has left me devastated. Yes, it was stupid of me to take it, but I wish I’d known the consequences before I’d done it

‘I will have this condition for life and I don’t know whether I’ll ever be able to walk properly again.’ 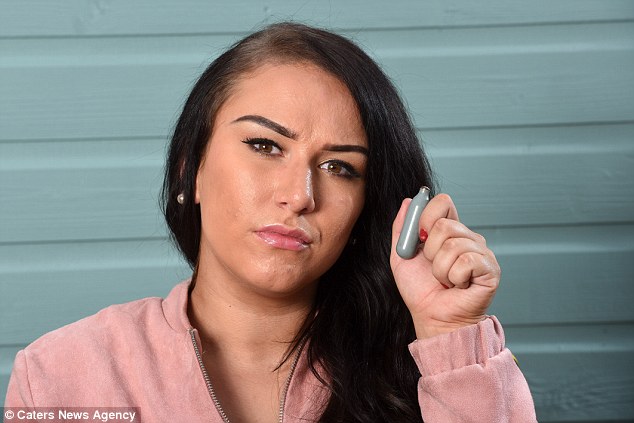 Ms Golding is amazed nitrous oxide cannisters can be bought from nightclubs and festivals for as little as £5 per balloon. She believes it should be a Class A drug like cocaine or heroin

‘The dangers of this drug need to be highlighted’

Ms Golding is speaking out to raise awareness of the dangers of inhaling NOS and how the consequences can affect a person’s family.

She said: ‘If anyone out there is considering taking NOS, please, think about your families.

‘I know I’ve got to live with the consequences of not being able to walk, but it’s not just me this has happened to, it’s my family too.

‘It’ll ruin your life and your family’s lives and it’s a very selfish move.

‘The dangers of this drug need to be highlighted. I want people to see what can actually happen to your body.’ 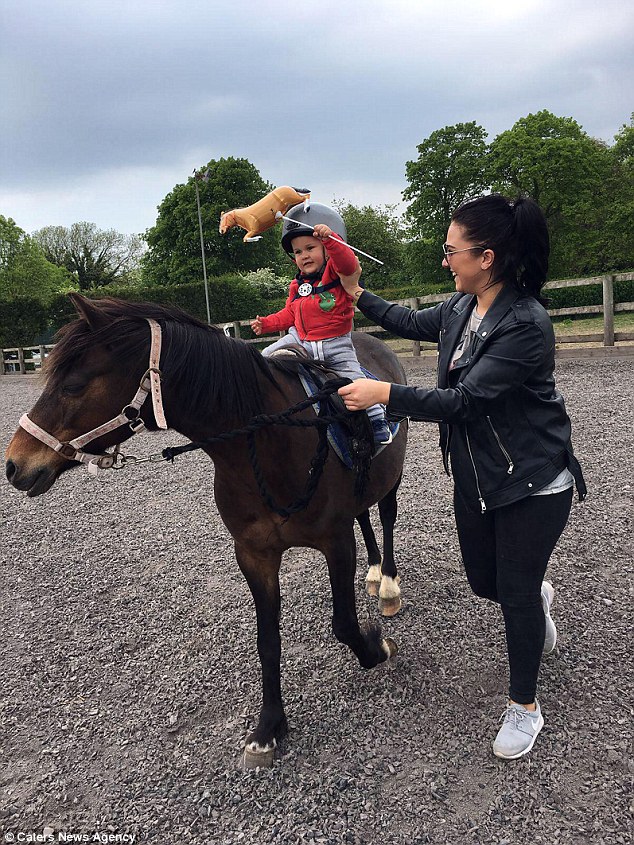 Ms Golding (pictured before with Parker) urges laughing gas users to think of the impact the drug can have on their families, saying inhaling nitrous oxide is a ‘very selfish move’

THE SOARING USE OF ‘HIPPY CRACK’

The biggest study of nitrous oxide, known as laughing gas or hippy crack, reveals the drug’s use is soaring in many countries, including the UK.

Out of the 19 countries surveyed, hippy crack was found to be the most popular in the UK, with more than half of respondents using the drug and 38 per cent doing so in the past year.

Most people inhale laughing gas from a balloon, while 13 per cent do so from a whipped cream dispenser.

Hippy crack is taken at house parties in 72 per cent of cases, with festivals also being a go-to destination for the drug.

Users take nitrous oxide for feelings of euphoria, relaxation and calmness, with some even experiencing fits of laughter.

Yet, laughing gas can cause people to experience a lack of oxygen, which can be life-threatening. Other side effects can include hallucinations and an immediate headache.

It can also cause severe vitamin B deficiency, which can lead to serious nerve damage.

Focus on Just One Sport Risks Burnout for Teens