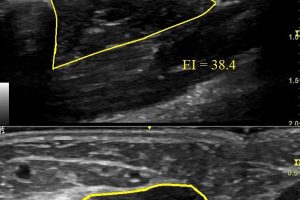 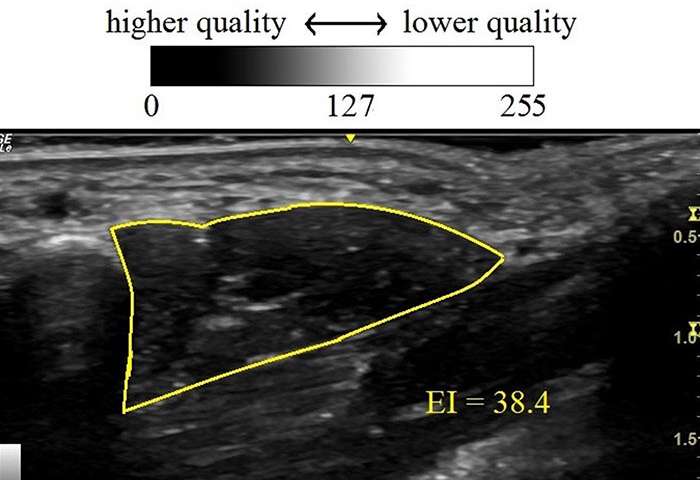 Juvenile obesity is known to cause a range of health problems, and University of Kansas researchers have documented another concern. Overweight children ages 7-10 show more fat in their muscle than healthy weight peers, which could lead to issues such as loss of muscle function, diabetes and disability.

Researchers performed ultrasounds and muscle imaging of youths on quadriceps and the first dorsal interosseous — the muscle between the thumb and hand—and found lower quality of the skeletal muscle in overweight children.

“One of the things I think that is often overlooked in childhood obesity is that skeletal muscle is deteriorating at a young age, even if the size of the muscle is larger or similar to healthy weight peers,” said Trent Herda, associate professor of health, sport & exercise science at KU and lead author of two studies examining fat and skeletal muscle quality. “If you have an 8-year-old who’s already having these kinds of problems, they’re starting off in a worse place, and that can very likely lead to earlier disability later in life.”

The researchers examined 7- to 10-year-old children, of normal weight, slightly overweight and obese status. In one study, they examined muscle composition of the quadriceps because it is part of the weight-bearing muscles in the leg that are partially used in walking. In another, they examined the muscle in the hand known as the FDI. Studies of quadriceps in overweight adults have regularly shown the muscle to be larger in overweight individuals, in part because they carry more body mass. Researchers wanted to examine the FDI to see if it showed differences in varying populations as everyone generally uses their hands in the same ways and they are not weight-bearing muscles. In both studies, overweight and obese children had more fat in both muscles.

KU’s Neuromechanics Laboratory is one of the only labs in the nation that can examine skeletal muscle quality and activity of motor units, or bundles of muscle fibers, from the skin. Herda co-wrote the studies with Eric Ryan of the University of North Carolina-Chapel Hill. They were published in the Scandinavian Journal of Medicine & Science in Sports and the Journal of Neurophysiology.

Those results could lead to a host of problems. Excess fat in skeletal muscle causes muscle fibers to contract differently, which could affect movement, generation of power and limit an individual’s type of activities. Fat in muscle also restricts blood flow and interferes with the function of insulin, which could lead to increased rates of diabetes, Herda said. The researchers plan to further study the effects of fat in muscle as well as interventions that could reduce it.

The researchers have done similar studies in adults ranging in age from early 20s through senior citizens. They have made similar findings in skeletal muscle quality throughout the life span, but the new studies are among the first to take a similar look at children.

“We thought we should examine muscle in a younger population, where there might plausibly be similar things happening in muscle quality at a young age that we hadn’t examined yet,” Herda said.

In the studies, the researchers measured not only muscle composition but performance during a task that required activation of the muscles in question. The overweight children showed impairment in activity of the larger motor units, or larger bundles of muscle fibers, for the quadriceps.

“When we studied overweight and obese children, as the intensity of the task increased, their activation of muscles differed in a manner that suggest poor performance,” Herda said. “They showed clear signs of impairment compared to their healthy counterparts. Moving forward, we need to see if this is reversible and the amount effort required to prevent such impairments in these kids. Properly functioning skeletal muscle is vital for health-related quality of life.”

Women who breastfeed for at least five months have more kids

Woman in vegetative state may not have shown signs of pregnancy prior to birth, expert says
at, Fatty, have, health, in, kids, more, muscles, of, Overweight, peers, problems, risk, studies, Than, tissue
Latest Posts