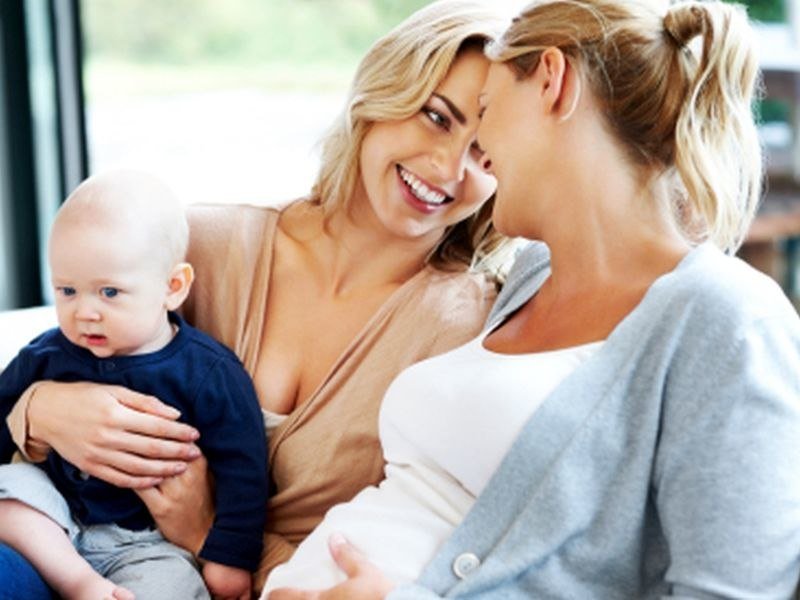 (HealthDay)—Young adults raised by lesbian moms show the same mental well-being as those who grew up with heterosexual parents, a new study suggests.

The findings, published in the July 19 issue of the New England Journal of Medicine, come from the largest, longest-running study to track development of kids in “planned lesbian families.”

The study has been following the same group of moms and offspring (conceived through donor insemination) since the 1980s. Over the years, the study has found that those kids are faring as well as—or even better than—other U.S. kids their age.

“They’re psychologically very healthy, even during this vulnerable time of life,” said Gartrell, a visiting scholar at the Williams Institute at the University of California, Los Angeles School of Law.

The study began in 1986 with 84 families—mostly headed by lesbian couples, but with some single lesbian moms, too. Back then, Gartrell said, many people assumed that kids of same-sex couples would not fare well.

“We were just coming out of a time period when homosexuality was considered a mental disorder,” Gartrell said. “There were people arguing that homosexual parents could not be good parents.”

But Gartrell’s team has found that the reality does not match the stereotypes. One set of findings, published in 2010, showed that at age 17, kids of lesbian moms had fewer behavioral problems, versus the norm for U.S. teens. They were also doing better in school, based on their mothers’ reports.

Beyond that, Gartrell said, none of the teens said they’d ever been physically or sexually abused by a parent or other caretaker—far different from the norm for U.S. teenagers.

That finding, Gartrell said, counters the common myth that homosexual parents are more likely to abuse their children.

According to Dr. Jack Drescher, a clinical professor of psychiatry at Columbia University in New York City, “Research shows us that what’s important for kids is that they have parents who love them—and not whether their parents are straight or gay.”

Drescher, who was not involved in the study, pointed out that same-sex couples in the United States can still face barriers if they want to adopt or foster a child. Certain states allow agencies to refuse those arrangements if they object based on religious beliefs.

Those states include Alabama, Michigan, Mississippi, North and South Dakota, Texas and Virginia, according to the American Civil Liberties Union. And last week, House Republicans passed an amendment to a federal funding bill that would allow adoption agencies to deny services to same-sex couples based on religious or “moral” beliefs.

“Those restrictions are not based on science,” Drescher said.

Gartrell agreed. “There’s no justification for restricting child placement based on [parents’] sexual orientation,” she said.

The current findings are based on 77 study participants who were evaluated at age 25. They completed a standard questionnaire on mental and emotional health, and their results were compared against the norm for Americans of the same age, education level, and racial and ethnic background.

Overall, the study found, both groups scored similarly on measures of depression, anxiety, attention problems and other mental health issues.

There are no comparable long-term studies of children raised by gay male couples, Gartrell said. It’s only in more recent years that they have been building families.