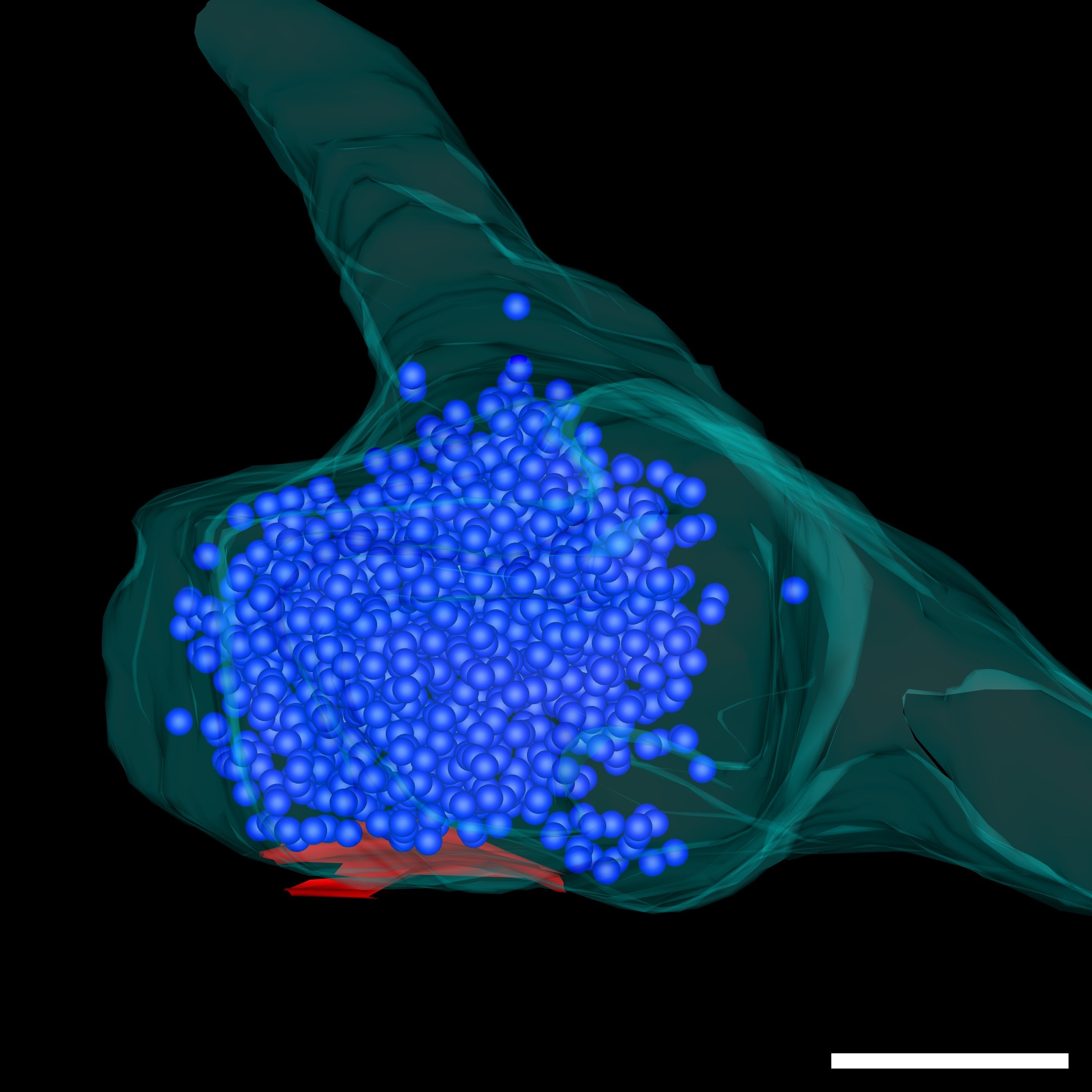 Inside cells, where DNA is packed tightly in the nucleus and rigid proteins keep intricate transport systems on track, some molecules have a simpler way of establishing order. They can self-organize, find one another in crowded spaces, and quickly coalesce into droplets—like oil in water.

In one study, HHMI Investigator Pietro De Camilli and colleagues have shown how liquid droplets inside neurons keep signals racing through the brain. In the other, a team led by HHMI Investigator Zhijian “James” Chen has discovered that droplets of a danger-sensing enzyme generate signals that launch an immune response.

The formation of these droplets is a phenomenon known as phase separation. In the last decade, biologists have watched proteins and RNA molecules rapidly organize themselves into droplets inside test tubes and spotted liquid-like droplets inside cells.

But it hasn’t always been clear what, if any, advantages these droplets provide. The new discoveries from De Camilli and Chen offer an answer—a clear link between phase separation and biological function.

In his lab at the Yale School of Medicine, De Camilli studies how neurons manage the neurotransmitters that relay signals between neighboring cells. Inside cells, these signaling molecules reside in tiny membrane-bound spheres called synaptic vesicles. When an incoming message arrives, vesicles release their contents into the synapse, the space across which a cell communicates with its neighbor.

Each cell can store thousands of vesicles in structures called nerve terminals. At times, a single terminal may need to release more than 100 synaptic vesicles in a second. So it’s crucial that the reserves are readily accessible, De Camilli says.

Using an electron microscope, scientists have seen that synaptic vesicles cluster together in compact structures. In the 1980s, as a postdoctoral researcher in the laboratory of Paul Greengard, De Camilli found that these clusters are highly enriched in a protein associated with the vesicle surface. The researchers called the protein synapsin. “We hypothesized that synapsin may help keep vesicles together, but we never really understood how it worked,” De Camilli says.

No membrane or structure encases the clusters, and De Camilli says he wondered for decades what held them together. When he heard about other biologists’ phase separation discoveries, he suspected the phenomenon might also apply to synapsin.

Postdoctoral researcher Dragomir Milovanovic was struck by some features of synapsin that resemble those of other proteins that can phase separate. He dropped a solution of fluorescent synapsin molecules onto a cover slip and watched them quickly coalesce into droplets. Occasionally, two droplets merged into one, just like oil droplets finding one another in water. In other experiments, Milovanovic observed individual synapsin molecules moving freely between droplets. Just as the scientists had guessed, synapsin was behaving like a fluid.

Milovanovic went on to show that synapsin can even organize vesicle-like structures—like those inside nerve cells—into droplets. What’s more, the droplets rapidly break up when exposed to a signal that triggers neurotransmitter release. “You go from beautiful droplets to the complete disassembly of droplets,” De Camilli says, explaining that this mimics the natural dispersion of synaptic vesicles that occurs when nerve cells communicate.

In nerve cells, droplets of synaptic vesicles offer a clear advantage, he says: a ready supply of neurotransmitter messengers. The finding explains how neurons can keep up when the demand for neurotransmitter release is high.

At the University of Texas Southwestern Medical Center, Chen’s work with liquid droplets helped explain a different puzzle: how a DNA-sensing enzyme alerts the immune system to infection. That enzyme is cyclic GMP-AMP synthase, or cGAS, which Chen’s lab discovered in 2012.

The enzyme floats in the cytoplasm of cells and switches on when it encounters DNA. Since a cell’s own genes are contained in its nucleus and mitochondria, DNA in the cytoplasm is a signal that something is amiss—usually, that a pathogen is present. cGAS responds by generating cGAMP, a messenger molecule that calls on the body’s first line of defense—the innate immune system—to counter the suspected threat.

A few oddities about the enzyme’s behavior were, at first, difficult to explain. Why, for example, did long DNA molecules activate it more efficiently than short ones? A clue came from the concentrated speckles that Chen and his colleagues had seen the enzyme form inside cells when bound to DNA. Perhaps the enzyme was undergoing phase separation, they thought.

Sure enough, when graduate student Mingjian Du mixed cGAS and DNA in a test tube, he saw characteristically liquid behavior. The DNA-bound enzyme formed compact droplets, molecules diffused from one droplet to the next, and occasionally two droplets merged into one. “We suspected this might happen, but it’s quite striking when you see that it happens in such an efficient manner,” Chen says.

Du’s experiments established that the enzyme forms droplets only in the presence of DNA. These droplets are critical for pathogen sensing—they appear to act as microreactors, bringing the enzyme together with everything it needs to generate the immune-activating messenger molecule, Chen says. Longer pieces of DNA are better at promoting droplet formation than short ones.

And because DNA must be present above a threshold level before these droplets form, cGAS rarely calls the innate immune system to action unnecessarily. Waiting until enough DNA is present to trigger phase separation effectively lets the enzyme distinguish friends from foe, Chen says.

A new map of the brain’s serotonin system
and, at, balance, droplets, immune, in, keep, neurons, protein, ready, system, the
Latest Posts