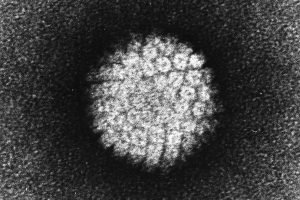 Human papillomavirus (HPV) is widely known to cause nearly all cases of cervical cancer. However, you might not know that HPV also causes 70 percent of oropharyngeal cancer, a subset of head and neck cancers that affect the mouth, tongue, and tonsils. Although vaccines that protect against HPV infection are now available, they are not yet widespread, especially in men, nor do they address the large number of currently infected cancer patients.

Patients with head and neck cancer caused by HPV respond very differently to treatments than those whose cancer is associated with the consumption of tobacco products. The first group generally has better outcomes, with almost 80 percent of patients surviving longer than 5 years after diagnosis, compared to only 45-50 percent for patients with tobacco-related cancers.

To better understand what might cause these differences, a team of scientists led by Nevan J. Krogan, Ph.D., senior investigator at the Gladstone Institutes, is taking a unique approach by focusing on the cancer-causing virus. They recently mapped the interactions between all HPV proteins and human proteins for the first time. Their findings are published today in the journal Cancer Discovery.

“With our study, we identified several new protein interactions that were previously not known to cause cancer, expanding our knowledge of the oncogenic roles of the HPV virus” said Krogan, who is also a professor of cellular and molecular pharmacology at UC San Francisco (UCSF) and the director of the Quantitative Biosciences Institute (QBI) at UCSF. “The human proteins we found interacting with HPV are involved in both virus- and tobacco-related cancers, which means they could be potential targets for the development of new drugs or therapies.”

A Complete Picture of Virus-Cancer Connections

Then, in collaboration with computational biologist Wei Zhang, Ph.D., in the laboratory of Trey Ideker, Ph.D., at UC San Diego School of Medicine, they looked at entire networks of each protein—rather than only individual proteins—to detect the most important players. They also compared their list of proteins with data from HPV-associated cancer samples published by The Cancer Genome Atlas project. This large consortium catalogued genetic mutations in tumors of various cancers.

“We integrated together these two sets of data to get a comprehensive look at potential cancer-causing interactions between HPV and head and neck cancers,” said Krogan, who is co-director of the Cancer Cell Map Initiative. “This combined proteomic and genetic approach provided us with a systematic way to study the cellular mechanisms hijacked by virally induced cancers.”

By overlaying the protein interaction and genomics data, the scientists discovered that the HPV virus targets the same human proteins that are frequently mutated in smoking-related cancers. Interestingly, those proteins are not mutated in HPV-positive cancers.

For example, their findings reconfirmed a well-established interaction between the human protein p53 and an HPV protein called E6. In HPV-negative cancers (those related to smoking), p53 is mutated in nearly all cases. However, the same protein is rarely ever mutated in HPV-positive cancer patients.

“In both cases, when p53 is inactivated, it leads to cancer,” explained Eckhardt, one of the first authors of the paper. “The difference is that the HPV virus finds a different way of attacking the same protein.”

In smoking-related cancers, p53 is mutated, which causes the cancer. Instead, in HPV-positive cancers, the viral protein E6 interacts with p53 and inactivates it, resulting in the same cancer, but without the mutation. This suggests the establishment of the viral infection and the development of tumors share common pathways.

“We thought there must be more proteins that can cause cancer either by being mutated or hijacked by HPV, so we developed a new method to detect them,” added Eckhardt. “Our study highlighted two interesting instances where the interaction of HPV and human proteins play a role in the development or invasiveness of the cancer.”

Eckhardt showed that the HPV protein E1 interacts with the human protein KEAP1, which is often mutated in smoking-related cancers. In HPV-positive cancers, KEAP1 is not mutated. But, through its interaction with the protein E1, KEAP1 is inactivated, which helps cancer cells survive.

The researchers also found that the HPV protein L2, which is part of the virus’s packaging, interacts with two human proteins called RNF20 and RNF40. They demonstrated that in HPV-positive cancers, this protein interaction increases the tumor’s ability to spread and invade new parts of the body.

These results confirm that the HPV virus causes head and neck cancer by targeting the same proteins that go awry in response to smoking-induced mutations.

Krogan and his collaborators have shown that integrating HPV-human interaction with tumor genome data, and focusing on genes that are mutated in HPV-negative but not HPV-positive tumors, constitutes a powerful approach to identify proteins that serve as both viral targets and genetic drivers of cancer.

The scientists’ work should lay the groundwork to find better therapeutic options for both HPV-negative and HPV-positive head and neck cancers. In addition, Krogan’s long-term goal is to define a pipeline that will enable the study of many other virally induced cancers, including those linked to Hepatitis B and C, Epstein-Barr virus, and adenoviruses.