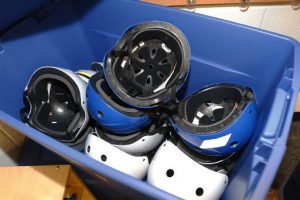 New children’s concussion guidelines from the U.S. government recommend against routine X-rays and blood tests for diagnosis and reassure parents that most kids’ symptoms clear up within one to three months.

Signs of potentially more serious injuries that may warrant CT imaging scans include vomiting, unconsciousness and severe, worsening headaches, according to the guidelines released Tuesday.

The guidelines from the U.S. Centers for Disease Control and Prevention are the first broad evidence-based recommendations for diagnosing and treating children’s concussions, the researchers say. They evaluated 25 years of scientific research on managing concussions in children and chose procedures with the strongest evidence of benefit.

The CDC’s guidelines are for concussions from all causes, including falls, sports and car accidents. They recommend rest from physical and mental activity including school and sports immediately after a concussion, gradually resuming normal routines.

CDC brain injury specialist Matthew Breiding, a co-author of the guidelines, said parents should tell their kids to report any concussion symptoms right away—whether they occur at home or during sports activities.

“Some children and teens think concussions aren’t serious or worry that if they report a concussion they will lose their position on the team or look weak. Remind them that it’s better to miss one game than the whole season,” he said.

By some estimates, at least 1 million U.S. children get concussions each year although the true frequency is unknown because there is no national effort to track them and many go untreated. The CDC has proposed developing a surveillance system to fill that gap and the new guidelines , published in JAMA Pediatrics, aim to improve detection and treatment.

The guidelines provide important advice for parents and doctors on managing kids’ concussions and could contribute to a “personalized approach to state-of-the-art care,” according to a journal editorial by brain injury experts at the Medical College of Wisconsin and University of California, San Francisco.

Concussions, also called mild traumatic brain injury, are caused by a bump or jolt to the head. The impact causes the brain to bounce or twist, potentially damaging brain cells. Repeated concussions have been linked with a debilitating brain disease found in autopsies on some retired football players.

Breiding said many people mistakenly believe that “you need to lose consciousness or be ‘knocked out’ in order to have a concussion.”

Headaches, dizziness, sensitivity to light or noise and sleep problems are among other possible symptoms that experts say warrant medical attention.

The guidelines’ highlights include:

—X-rays and CT scans aren’t effective at detecting concussions. They are sometimes done if doctors suspect a skull fracture or brain bleeding, but CT scans are preferred if a serious injury seems likely. Families should be told of potential risks from CT scans including radiation.

— Blood tests for detecting concussion haven’t been proven to work and shouldn’t be done outside of research.

—Most children’s symptoms clear up within one to three months but recovery varies and can be delayed in kids who’ve had previous concussions.

—Teens, kids with learning difficulties and those with mental illness all tend to recover more slowly than young children.

—Rest, the main treatment, is recommended for the first three days but inactivity beyond that may worsen symptoms.

This Is for the Moms Who Don’t Give a F***
Advice, Better, calls, concussions, for, kids, new, on, tracking
Latest Posts