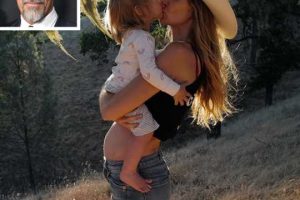 Josh and Kathryn announced Westlyn's birth in November 2018, with the actor sharing a video of his then-newborn baby girl fast asleep.

His father James Brolin spoke with PEOPLE Now in April of last year about his son's reaction to becoming a father again three decades after his first child was born, saying he "dropped everything" related to work and took on "nothing but diapers for three months," despite how busy he was.

Aside from Westlyn, Josh has two adult children — daughter Eden, 26, and son Trevor, 32 — from his first marriage to actress Alice Adair. Josh and Kathryn tied the knot in September 2016.

Off the heels of his wildly successful run as supervillain Thanos in the Marvel Cinematic Universe, Josh — who made his big-screen debut as Brand in the 1985 adventure film The Goonies — is set to receive a star on the Hollywood Walk of Fame next year.

Other film honorees will include actors Zac Efron, Shia LaBeouf, Naomi Watts and Morris Chestnut — as well as Josh's fellow MCU stars Don Cheadle and Benedict Cumberbatch, according to Variety.

The original cast members of The Goonies, including Josh, recently reunited for a virtual reunion hosted by Josh Gad amid the novel coronavirus (COVID-19) global health crisis.