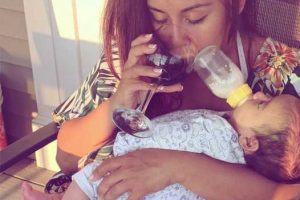 For Nicole “Snooki” Polizzi, motherhood is a balancing act.

The mother of three, 31, shared a new photo over the weekend that showed the Jersey Shore: Family Vacation star feeding her 8-week-old son Angelo while enjoying a glass of red wine.

“What’s mom life like with 2 kids and a newborn?” THIS,” said Polizzi, who is mom to daughter Giovanna Marie, 4½, and son Lorenzo Dominic, 6½. She also added the hashtags “mom juice” and “I’m a good Mom I swear.”

Although the majority of her fans applauded the star for letting herself have some fun with comments like, “You deserve this! Moms need some time to relax!,” some social media users took issue with her photo.

In response to one commenter who expressed concern that Polizzi was drinking alcohol while feeding her son, the reality star clapped back, writing, “I allow myself to have a few glasses once a week to stay sane with 3 kids.

“I do what’s necessary to clean my milk for my baby,” she added. “Let a mawma live.”

In addition to getting some love from her fans, Polizzi’s pals Lauren Sorrentino and Jessie James Decker — who faced backlash earlier this year after posting a photo of herself breastfeeding while holding a glass of wine — left their own supporting comments.

“This is skill!” wrote Lauren, who is the wife of Polizzi’s Jersey Shore costar Mike “The Situation” Sorrentino.

Opening up about what it’s like to raise her children in the spotlight, during an interview on the Women on Top podcast earlier this month, Polizzi said she’s had to deal with her fair share of criticism.

“I always question myself about how much I should share about my kids. Because it’s going to be in the public eye and everyone’s going to know,” she said. “And I ended up stopping for a little bit just because people on the Internet are assholes and everyone is a mom shamer. Everyone can do things better than you. And they just give you this unwanted advice that I just couldn’t stand, so I stopped sharing the kids.”

However, she quickly began posting again after realizing that she didn’t have to listen to parenting advice from strangers.

“But then I am like f— it, they can ruin my life and what I want to share with my fans. So I just ended up posting the kids again right away,” she said. “I want my babies to always be protected and in this little bubble, but at the same time, they are just such amazing little creatures and I want to share them.”

While the reality star had previously made it known she wanted to have four children with husband Jionni LaValle, Polizzi recently revealed that the pair are done expanding their family.

“I’d rather not,” said Polizzi during an appearance on Live with Kelly and Ryan earlier this month when Ripa suggested a fourth baby might be in the couple’s future.

“I always wanted four and I always thought I’m gonna have four kids, but after I pushed [Angelo] out, I’m like, ‘I am done,’ ” she recalled. “And I just got out of my diapers. I wore those diapers for a while.”