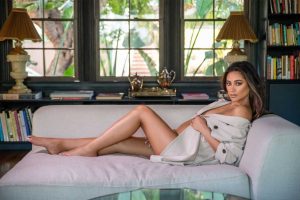 Shay Mitchell isn’t afraid to reveal that she felt “extremely lonely” during the time she kept her pregnancy private.

The Pretty Little Liars alum, 32, didn’t announce the news of her first child on the way until she was five months along in June — a decision that was “super isolating” and caused her to go through a “severe depression,” she told maternity lifestyle brand HATCH in a new interview.

“I previously had a miscarriage and that experience gave me anxiety about sharing the news of this pregnancy with anyone outside of our parents,” Mitchell admitted. “With the first pregnancy, I was elated and told everyone at eight weeks. However, I wanted to be sure that this second pregnancy would be viable before shouting it from the rooftops, so I hid it for nearly six months and became very antisocial.”

“Usually, I’m incredibly active and outgoing, but instead, I mainly stayed home to avoid stares and questions. I was extremely lonely,” Mitchell said.

The star explained that by not telling anybody about her pregnancy as she was noticeably gaining weight, she was “paranoid” that her team was judging her and thinking she should “hit the gym,” which contributed to her loneliness.

As Mitchell revealed that she suffered from “prepartum depression,” she remains curious why it remains a topic that is rarely discussed.

“As long as I can remember, I’ve heard about postpartum depression. However, to be depressed at the beginning came as a shock,” she said. “The isolation and anxiety I experienced was crippling. I thought I was going out of my mind and questioned why nobody ever talked to me about this phase.”

“I’ve been fortunate since sharing the news of my pregnancy to have some amazing conversations with other pregnant women and moms and know that all these feelings are ‘normal,’ so now we just need to normalize them by discussing more openly!” Mitchell added.

After the You actress finally told the world about her baby girl on the way with boyfriend Matte Babel, she told HATCH she felt “total relief.”

“I was able to come out on my terms in exactly the way that I wanted. I was a little nervous that at some point a photo would be released before I was ready to talk about the pregnancy. I’m so happy it all worked out as I had hoped,” she admitted.

In early January, Mitchell opened up about her personal highs and lows of 2018 — and revealed for the first time that she had suffered a miscarriage.

She shared with HATCH that during the hard time, she “kept telling [herself] that everything happens for a reason,” as “to follow a miscarriage with a healthy pregnancy generally means the first fetus was not viable.”

“As difficult as that was to wrap my head around when I was going through it, I tried to remind myself there was a reason the pregnancy didn’t come to term,” she added.

Looking forward, however, Mitchell said she’s been feeling great and hasn’t struggled with many typical pregnancy symptoms like morning sickness or wild cravings.

She also revealed that after a recent visit to the doctor, she learned the baby had flipped into a head-down position, meaning there will be a lower risk of having to perform a c-section — which Mitchell hopes to avoid.