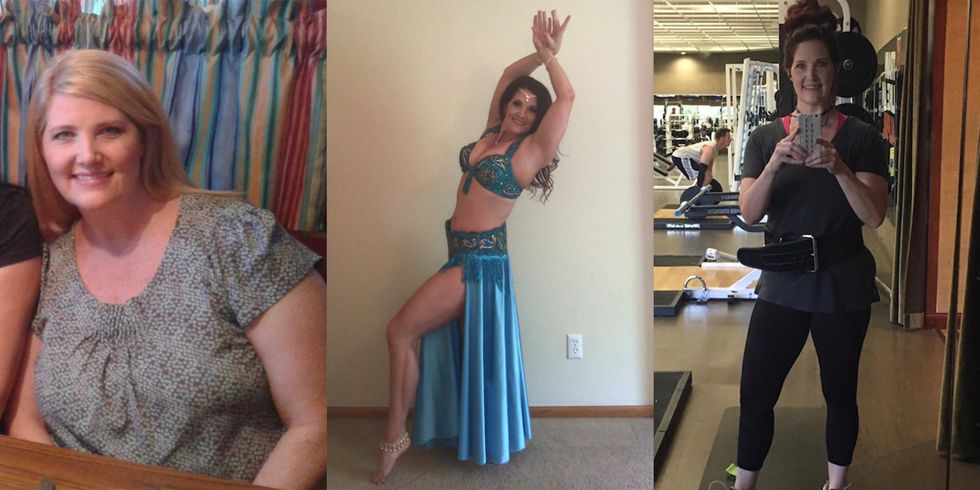 When I was 44, I saw a picture of myself and didn’t recognise the woman in the photo. She was overweight and looked exhausted. The person staring back didn’t look the way I pictured myself, but it did certainly match how I felt. I struggled with fibromyalgia and was in a constant flare up, my whole body hurting all the time. I had been suffering from panic attacks and stress for years; I was depressed and felt completely out of control. I ate to comfort myself. I felt sick and tired all the time—but I was sick and tired of feeling this way.

I started out slow working out.

I started working out for 15 minutes, three times a week from home—that was all I could manage. I was weak; I had difficulty doing bodyweight squats, I couldn’t even do one pushup on my knees. So I’d often just walk on the treadmill.

Eventually, my endurance and strength got better, little by little. After several months, I switched to workout videos. Cathe Friedrich became my favorite because her videos included light weight lifting, something I discovered I enjoyed.

My progress was really slow—but it was working. I was feeling more positive and healthier than I ever had. No more feeling lost, depressed, suicidal, anxious, hopeless. I had control over my life.

But I wanted more. After two years of the same routine, the monotony of at-home workouts was getting boring, so I decided to join a gym filled with equipment and challenges.

I realised I need some help if I wanted to build muscle.

I could squat and do pushups, but had no clue how to add weights to my workouts. I bought an e-book and watched YouTube videos to learn how to lift. But most importantly, I joined a group on Facebook where I met a woman named Brigitte. She was starting her own online personal training business and looking for people who would be interested in trying her services.

The accountability sounded nice—plus it was affordable and offered structure. So I signed up with Brigitte. She gave me nutrition advice and emotional support, while her friend Tucker structured the workout plans. I told him my goal: to gain more muscle. Because I was already strong, Tucker suggested I try powerlifting.

I was terrified of power lifting at first.

I knew of the sport, but it wasn’t something I had ever considered trying. When Tucker suggested it, I was honestly afraid. But I also knew if it scared me that much, it was something I should try. This was the challenge I had been looking for.

I thrive when I have goals and a solid plan, so I found a powerlifting meet scheduled for March 2016 and signed up.

Tucker and I started training. I learned how to lift—I did squats, bench presses, deadlifts. We focused on building up my back, legs, and shoulders.

Sometimes that initial fear I’d experienced bubbled back up—like when it came time to load an insane amount of weight on the back. The thought of squatting down and not being able to get back up was terrifying. And that’s happened to me plenty of times!

But what I’ve now learned is that you can push past fear and discomfort—sometimes, the biggest obstacles are mental.

I had no idea what I was getting myself into.

As my first lifting competition started getting closer, I was excited, terrified, and euphoric—all at the same time.

The day of that first powerlifting meet, I felt like I was going to vomit and wondered what the heck I’d signed up for. I was absolutely terrified of being on this platform with everyone staring at me. But, like I had done with every training session, I pushed past the fear.

I had the time of my life—I met amazing people and even came home with a first-place trophy. I instantly became hooked and couldn’t wait to do it again.

I had my second meet last year, in March 2017, and got a state record for squats. I am currently training for my third meet in October.

Now, powerlifting is my go-to.

I love to dance and recently started yoga, but the bulk of my training is powerlifting and bodybuilding. I lift five days a week and have two rest days. Powerlifting is such a challenge, physically and mentally. It takes a lot of grit, motivation, and perseverance.

I love how weights have shaped my body. I love feeling sore and the calluses on my hands (I call them my lifting trophies). I love holding a heavy barbell. It just makes me happy and gives me joy and a sense of accomplishment. And it’s the best stress reliever.

It’s crazy to me that I went from struggling with a single bodyweight squat to squatting 113kg and deadlifting over 136kg—and at nearly 50 years old. It blows my mind, and it’s exhilarating to see what my body is capable of doing if I stay patient and consistent.

I went from a very weak, insecure, scared woman who doubted herself to a confident woman who now feels strong, capable, and, dare I say it—sexy.

I’ve lost 30kg since I first committed to 15 minutes of working out five years ago. But I’m not concerned with the number on the scale—my focus is on being strong, not necessarily being lean.