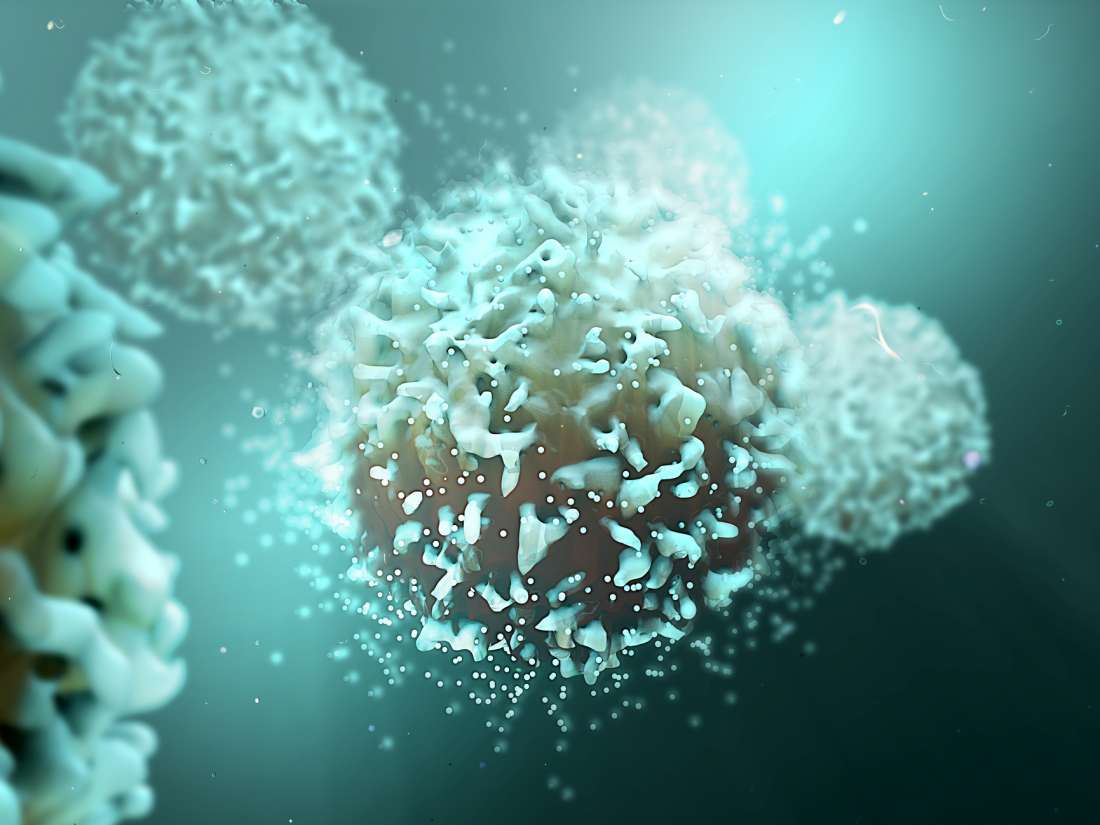 Our immune system possesses a rich arsenal of “weapons” that it can use in the fight against disease.

Sometimes called cytotoxic T lymphocytes, CD8 T cells are also key in the fight against cancer and in the use of immunotherapy against tumors.

CD8 T cells can recognize and kill malignant cells by secreting cytokines and releasing cytotoxic substances. When the cancer is too strong, however, these cells can become overpowered.

New research may have found a way to give these cells the strength they need to carry on fighting.

Shomyseh Sanjabi, an assistant investigator at the Gladstone Institutes and an associate professor of microbiology and immunology at the University of California, San Francisco, led the new study, which was published in the journal PNAS.

Sanjabi explains the motivation for the research, saying, “The problem is that CD8 T cells are often exhausted in cancer and chronic infections like HIV, so they die off or stop functioning properly.”

“I’ve been trying to better understand how these cells develop in order to find ways to help them regain their function and live longer,” she adds.

As the researchers explain, in the first stage of the fight against pathogens — or “foreign invaders” such as bacteria or viruses — CD8 T cells go into “effector cell” mode. As effector cells, they multiply very quickly and “march” rapidly to the site of the damage.

However, as soon as they fulfill their duty, kill off the infected cells, and remove the pathogen, most effector cells are “programmed” to die. This way, the immune system avoids the situation in which “overzealous” immune cells start attacking your own body.

However, there are also effector cells that survive. These evolve into so-called memory immune cells, whose role is to “memorize” the pathogen they dealt with so that they can respond more quickly and effectively the next time they are confronted with it.

Sanjabi and team suspected that two molecules, called Sprouty (Spry) 1 and Spry 2, would affect this transformation from effector cells to memory cells. So, she and her colleagues deleted the genes responsible for these molecules in the CD8 T cells of mice.

The positive effects of deleting Spry 1 and 2

The researchers revealed that, when Spry 1 and 2 were deleted, more effector CD8 T cells survived and turned into memory cells. Not only that, but the ensuing memory cells were stronger and better able to protect against pathogens than normal memory cells.

Finally, depleting the immune cells of the two molecules also affected how the cells used their energy. First study author Hesham Shehata explains that, unlike effector cells, memory cells depend on a different source of energy for their survival: fats, rather than sugar.

Shehata also explains why this is extremely important. “Tumor cells use a lot of glucose, so effector cells have difficulty surviving in the tumor environment because it doesn’t have a sufficient source of energy.”

“While memory cells generally don’t depend on glucose,” he says, “our study suggests that effector cells without Sprouty 1 and 2 consume less glucose, so they could survive and function in a tumor environment much better.”

“By shedding light on the role of Sprouty 1 and 2, our work revealed another layer of the underlying biology of T cells,” Shehata continues.

“Cells that lack Sprouty 1 and 2 have immense potential not only to fight tumors, but chronic viral infections as well. It’s exciting that our study can be applied to multiple contexts.”

Indeed, memory immune cells boosted by deleting the two molecules could potentially detect and kill HIV in its latent form. This dormant form of the virus has been one of the main obstacles in curing HIV.

In cancer, studies have pointed out the importance of memory cells in immunotherapy. Specifically, reactivating memory CD8+ T cells has been suggested to be crucial for preventing relapse.

“There’s been great interest within the scientific community,” notes Sanjabi, “to enhance the development and function of memory CD8 T cells, which work better for immunotherapies than effector T cells.” She goes on to refer to CAR T cell therapy, an innovative form of immunotherapy that is receiving increasing attention.

“Our findings,” she goes on to say, “could provide an opportunity to improve future engineering of CAR T cells against tumors. This could potentially be used in combination with a genome-editing technique like CRISPR that would remove the Sprouty 1 and 2 molecules from the cells to make them more effective.”