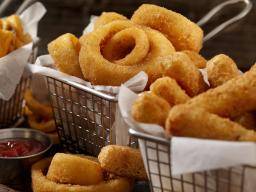 It is also necessary for producing hormones, vitamin D, and substances that work to digest fatty foods.

However, a person’s lifestyle and genetics can cause their body to produce too much cholesterol. When cholesterol builds up in the arteries, it can block blood flow, which can lead to coronary heart disease, heart attack, or stroke.

A healthful diet is one way to help keep cholesterol levels in check. While avoiding foods with high cholesterol content may be beneficial for some, the American Heart Association, National Heart, Lung, and Blood Institute, and Centers for Disease Control and Prevention (CDC) agree that the most effective dietary approach to cutting blood cholesterol is choosing foods that contain unsaturated fats over those that contain saturated or trans fats.

Cholesterol is classified into two groups, based on the type of protein that transports it through the bloodstream:

It is important to pay attention to the types of fat consumed, as each form of fat influences cholesterol levels differently:

A study published in The American Journal of Clinical Nutrition caught up with 344,696 participants 4 to 10 years after they changed the kinds of fats they ate. The group of participants who cut their saturated fat intake by 5 percent and replaced it with polyunsaturated fats had significantly fewer incidences of coronary illness or coronary-related death.

Trans fat intake, on the other hand, should not just be reduced but cut out completely. In 2013, the United States Food and Drug Administration (FDA) announced that the major commercial source of trans fats, partially hydrogenated oils, were no longer “generally recognized as safe” because of their strong links to coronary heart disease.

A national ban on trans fats will begin to be implemented in 2018, and several American cities have already banned them from use in restaurants.

While nationwide cardiovascular disease incidences have recently fallen, the results of a recent study in JAMA Cardiology revealed an additional 6.2 percent decrease of heart attack and stroke in the New York counties where trans fats have been banned.

The American Heart Association advise reducing saturated fat intake to no more than 5 to 6 percent of the total daily calories. To do this, they suggest limiting the following foods:

It is also important to avoid trans fats. Foods to stay away from include:

Only animal products contain cholesterol itself, as a liver is needed for its production. However, cholesterol content is not as much of a concern as fat content.

Cholesterol that has been swallowed is poorly absorbed into the bloodstream and has little effect on cholesterol levels after several hours. Some of this cholesterol, however, may be absorbed and reach the arteries, so limiting high-cholesterol foods may be beneficial.

Foods that contain cholesterol and may be best avoided include:

It is important to note that a completely fat-free diet can also be harmful, because it would deplete the levels of good carbohydrates, impair normal nerve and brain function, and possibly increase inflammation. Choosing healthful fats can help lower bad cholesterol levels, while maintaining, and in some cases increasing, good cholesterol levels.

Fiber is equally important for a healthy heart. Fiber is found in two main forms – soluble and insoluble.
Insoluble fiber is important for digestive health. Soluble fiber binds to cholesterol in the bloodstream and helps remove it through stool. Soluble fiber has the added benefit of helping to control blood sugar levels as well.

Some cholesterol-friendly, fiber options to consider include:

Choose leaner cuts of meat and smaller portions, as well as low-fat or fat-free milk, and yogurts. Non-fat cheese is not recommended as it is highly processed and cannot be considered a whole food.

How things are cooked can also affect the saturated fat content in a meal. Some easy adjustments to cooking routines include:

Combining these cholesterol-cutting techniques with a balanced, plant-heavy diet and an exercise routine, can reduce the risk of heart disease, and will also promote an overall healthier life.