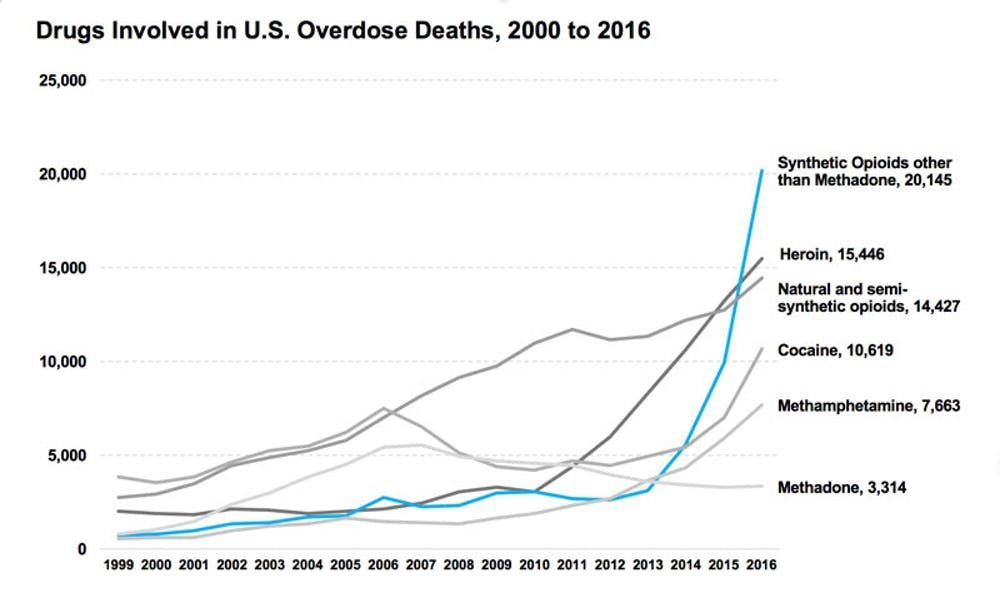 At a hearing on Capitol Hill earlier this year, U.S. Senator Lamar Alexander asked an important question: Why is most of the treatment for opioid addiction more opioids?

But even with a number of research projects to develop alternatives to opioids, the reality is that our brains don’t let go of an opioid addiction easily, if at all.

It’s not just that your brain likes opioids – whether it’s prescription pain relievers, heroin or synthetic opioids such as fentanyl – and responds to them with feelings of euphoria and warmth, helping you overcome pain. Opioids disrupt the normal functioning of your brain, making it harder for people to quit and more vulnerable to relapse.

The hopeful news regarding the opioid crisis is that scientists are searching for promising targets in developing non-opioid treatments for addiction. For example, this year a Food and Drug Administration advisory committee voted to approve the high blood pressure medicine lofexidine as the first non-opioid medication to treat opioid withdrawal symptoms.

But in order to accomplish the feat of producing something that looks like a long-term answer to opioid addiction, scientists will have to hack the science of the human brain. Earlier this year, the NIH launched an initiative called Helping to End Addiction Long-term (HEAL) that takes an important step forward in doing just that. It funds research into potential new treatments aimed at the brain reward pathway – the regions of the brain where neurons release the neurotransmitter dopamine, which gives you a jolt of pleasure, makes you feel good and signals you to repeat this pleasurable behavior in the future. By developing these opioid alternatives, the strategy is to prevent opioid abuse, dependence and relapse.

For now, though, we are a nation caught in a vicious cycle. The most common drugs prescribed to treat opioid addiction are methadone and buprenorphine, which bind to the same mu (µ) brain receptors as the illicit forms of the drug.

Methadone is an agonist, meaning it binds to the mu opioid receptors and its long-acting function satisfies an addict’s craving for heroin without causing the intense high of the illicit form of opioids. Buprenorphine also acts on the mu opioid receptor, but unlike methadone or heroin, it is a partial agonist that lessens the painful symptoms of withdrawal while producing a limited version of the euphoric effects of opioid drugs. At the correct dose, buprenorphine can suppress cravings and withdrawal symptoms and block the effects of other opioids, giving time to recondition the brain and learn coping mechanisms for the social and emotional aspects of addiction.

While treating opioid addiction with more opioids isn’t ideal, addicts who don’t receive those medicines and are treated with only psychological support are twice as likely to die of a relapse overdose.

The most commonly known non-opioid treatment for opioid addiction is naltrexone, sold under the brand names Vivitrol and ReVia. Naltrexone binds to opioid receptors and blocks the pain relief and euphoric effect of opioids – but it’s not a cure-all. Studies have reported large numbers of dropouts from treatment because addicts can’t begin using naltrexone until they are no longer experiencing the physical withdrawal symptoms from opioids. Many never get to that point.

How opioids rewire the brain

What is it that makes the brain so vulnerable to opioid drugs as opposed to other drugs of abuse?

It has been found that opioids readily cross the blood-brain barrier, which is composed of tightly packed cells that line blood vessels and keep most molecules out of the brain. This is what makes the effect of opioids incredibly potent, giving the user a feeling of “instant reward.”

Over time, use of opioids also triggers changes in the physiology of the brain by altering reward processing, disrupting neural connections and ultimately decreasing brain volume. Scientists know that µ-opioid receptors (MORs) are quite prevalent in cells in the hippocampus, the brain region responsible for learning and memory. Opioids seem to have a robust impact on learning and memory, ultimately making the addiction more powerful and creating another strong hold on the brain.

Additionally, researchers have found that opioids alter neural reward processing. The amygdala – the emotional and reward-processing center of the brain – is governed by the prefrontal cortex or the “logic center.” Neural connections from the amygdala project signals to the prefrontal cortex – so when humans have an initial impulse, our executive function or “higher thinking” kicks in to regulate our emotional and reward-seeking behavior.

Opioids disrupt this process and the reward-seeking behavior begins to dominate. Opioid addicts are known to lose gray matter in the amygdala, which drives drug craving and dependence. Opioids can further cause areas of the cortex to lose volume, and these changes have been found to persist even after drug use ceases. This suggests that brains lose neuroplasticity – the brain’s way of repairing itself.

The result of these changes to brain chemistry is that people are wired to respond to opioids and crave them at increasingly higher levels as long as they are used. That’s one reason why heroin deaths have surged more than five-fold since 2010, the Drug Enforcement Administration reports. Users increasingly seek more extreme forms of the drug cut with fentanyl or its analogues – a form the DEA refers to as “hot” heroin for its increasing potency.

As fast and as furious as the opioid epidemic has come upon us, our nation should brace itself for potentially investing billions of dollars over decades to come to develop safer and more effective treatments, as well as ones that will address the complex brain damage opioids cause.

How to Fart, Poop, Or Pump At Work Without Any Embarrassment

How much salt does it really take to harm your heart?
addiction, alters, brains, How, more, opioid, our, to, want
Latest Posts