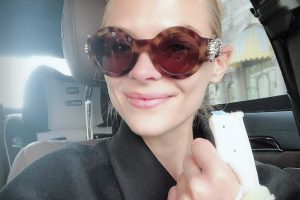 Jaime King is on the mend after suffering an injury while on the set of an upcoming TV project.

The 39-year-old actress revealed in an Instagram post on Wednesday that she was was just released after spending three nights at Cedars-Sinai Medical Center, where she was treated for “lots of broken and torn things.”

“Thumbs up! Finally released from the hospital after 3 nights. Lots of broken and torn things and I am so grateful to all of the doctors and nurses at Cedars,” King captioned a smiling photo of herself showcasing her bandaged hand while sitting in a car.

“#artimitateslife #blacksummer is wrapped and Rose is forever in my heart,” she said, referencing the new series Black Summer that she will appear in as Rose.

“I would do anything for my character and for my cast and crew,” continued the mother of two. “Including getting busted the f— up. Though, I prefer my body to be in one piece. ?”

In July, Netflix announced that King would star as the lead in its new 8-episode zombie thriller, Black Summer.

“A mother, torn from her daughter embarks upon a harrowing journey, stopping at nothing to find her,” the series’ logline is described as. “Thrust alongside a small group of American refugees, she must brave a hostile new world and make brutal decisions during the most deadly summer of a zombie apocalypse.”

Last week, the Hart of Dixie alum shared a photo of herself, with blood-like makeup on her face, on set of the upcoming show.