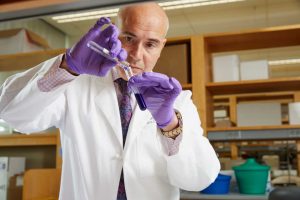 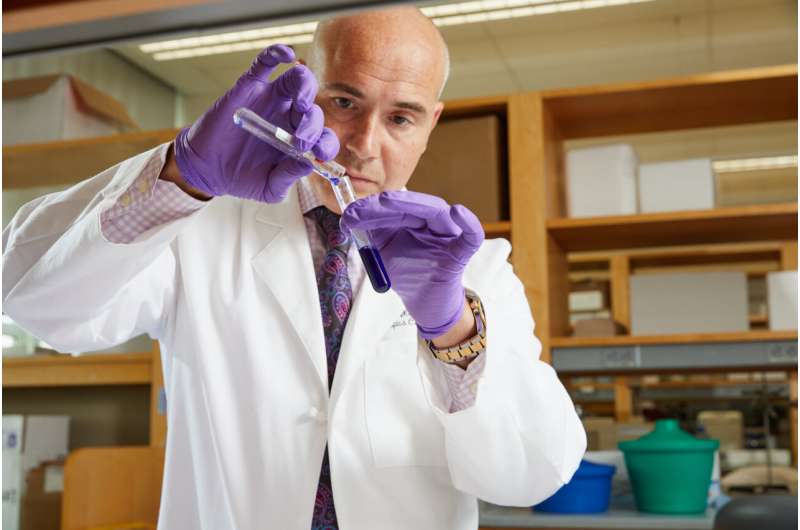 One of the most difficult things about lupus, a chronic autoimmune disease, is that people who have it don’t always realize it—they know something’s not right, but they’re not sure what. They may feel exhausted and have pain that is vague, nonspecific, and unpredictable. They may look healthy, so if they complain, friends and family—and even some doctors—might not take it too seriously.

Lupus is difficult to diagnose and treat, because the symptoms mimic other conditions, it affects the immune system differently in people, and drugs traditionally used to treat it come with serious side effects. Still, doctors and scientists are determined to find solutions.

“We want people to get better more quickly, therapies to be safer, and to understand why lupus is different in some people than in others,” says Fotios Koumpouras, MD, director of the Yale Lupus Program, which provides a comprehensive evaluation of and treatment to lupus patients. It also offers programs such as a combined rheumatology-dermatology clinic (the first of its kind in Connecticut) and access to clinical trials. “We want to be better equipped to identify who needs more intensive therapy right off the bat,” he says.

The good news is that there has been progress, thanks to Food and Drug Administration (FDA) approval in 2021 of two new drugs that treat lupus and lupus nephritis (lupus that involves the kidneys); each has allowed doctors to offer more patients a better chance of remission.

Meanwhile, researchers are focused on learning more about how the disease develops. They are especially interested in a period of inflammation in the body that starts years before patients notice their first lupus symptoms.

“This research will lead to the development of other drugs,” says Joseph Craft, MD, a rheumatologist who cares for patients and directs a Yale School of Medicine laboratory devoted to the understanding of systemic lupus erythematosus, the most common type of lupus.

Below, Drs. Koumpouras and Craft, and rheumatologist Insoo Kang, MD, discuss the challenges in diagnosing and treating lupus, as well as their hopes for the future.

Lupus: Learn what you’re up against

Lupus is an autoimmune disease. That means the immune system, which is supposed to fight infection, is attacking healthy tissue instead. The disease can cause inflammation and pain in any part of the body, although it commonly affects the skin, joints, and internal organs. It’s estimated that 1.5 million people in the United States have lupus, most between the ages of 15 and 44. Since lupus can’t be cured, doctors work on managing the disease and treating its symptoms.

There are different types of lupus, including:

One clue that leads lupus specialists to suspect a patient may have the disease is evidence of inflammation in several organ systems, such as the skin, blood vessels, and joints.

Beyond that, there is range of symptoms that can occur in different combinations. “Some people have heard of the red, butterfly-shaped rash over the cheeks and nose that is associated with lupus—but many patients don’t get that rash, and in people who do, it doesn’t always mean lupus,” Dr. Koumpouras says.

But many lupus patients will have joint pain and fatigue, and there may be low-grade fevers, skin rashes, sensitivity to sunlight or fluorescent light, and chest pain when breathing deeply. Lupus can cause swelling in the hands and feet, or around the eyes, and pain and swelling in the joints. “Patients may experience a lot of joint pain, even if the joints look normal,” Dr. Koumpouras says.

The greatest concern is the potential for life-threatening damage to the body’s organs. “If the kidneys are damaged, they don’t function well. That can lead to kidney failure—and even the need for transplantation,” says Dr. Craft. “The disease can also damage the skin to the point where it is disfiguring, and inflame the joints so that it is difficult to walk or tend a garden.”

Why lupus is so difficult to diagnose

It’s important for doctors and patients to know the signs and symptoms of lupus, confusing as they are, since people who have SLE take an average of six years to get a diagnosis, and that’s enough time for lupus to start causing damage in the body, says Dr. Koumpouras.

One problem is that there is no single test for the disease. A diagnosis is primarily based on symptoms, although there are blood tests that are consistent with the diagnosis of lupus, Dr. Craft explains.

One test, called an antinuclear antibody test, looks for a type of antibody that often attacks the body’s own tissue, creating an autoimmune reaction. While a positive result could signal an increased risk for lupus, there are also many people who get a positive result who will never develop the disease, says Dr. Kang.

“So, the important questions are: Who should be tested? When should they be tested? And if the result is positive, who should be treated?” Dr. Kang says. “We hope additional studies will lead to answers.”

To that end, scientists are investigating the period leading up to full-blown lupus, with inflammatory changes in the immune system three to five to 10 years before a person with lupus notices symptoms. “We’re not sure why this inflammation leads to lupus in some people and not in others, but we do know that autoimmune tests are positive before they get the disease,” Dr. Koumpouras says, which leads to many questions. “Is there a way for us to identify those at risk before their symptoms develop? What are their cells and genes doing? Is there evidence of inflammation in various parts of the body, such as in the skin and joints?”

Learning more about this period could head off complications, says Dr. Craft, adding that, if a patient isn’t treated until they have symptoms, lupus may cause irreversible damage in their bodies. “By understanding how these things occur, we could hopefully intervene therapeutically much earlier in the disease,” he says. “We’re very interested in understanding this.”

While most people with SLE do not have family members with the disease, there is a genetic predisposition to lupus, and the number of genetic factors a person has can be a predictor of their risk for the disease, Dr. Craft adds.

But while such conditions as sickle cell disease or cystic fibrosis can be identified based on the presence of a single genetic mutation, there are well over 100 genetic markers for lupus, and those include genes that are found in people who don’t have the disease. “For example, you and I have changes in our genes that may be found in a lupus patient, but we only have five or 10 of those. But if you have more of those changes, you’ll be at greater risk of developing the disease. And that’s why it’s very hard to screen for,” Dr. Craft says.

There also is believed to be a hormonal factor, since lupus is so much more common in women than in men—in fact, nine out of 10 young people who have it are female, Dr. Koumpouras says. Curiously, after menopause—when estrogen levels dip—many women with lupus feel better, he adds.

“There’s also a random event, or environmental factor, that we’re not quite clear on, that causes further activation of the immune response,” he says. Scientists are still investigating all of this.

Another frustrating aspect of lupus relates to the side effects of treatments that have served as hallmark therapies for decades. Many lupus patients depend on glucocorticoids, including prednisone, to soothe symptoms. Glucocorticoids can be lifesaving, but can also cause complications, such as weight gain and weak bones (osteoporosis).

Doctors hope that will change with the introduction of the two new therapies approved in 2021 that are specifically targeted for lupus. While older medications have been designed to suppress the body’s entire immune system, these new drugs target specific molecules.

Altogether, there are now three of these targeted medications:

Drugs originally designed for other conditions are also important in the treatment of lupus. For instance, many lupus patients take Plaquenil (hydroxychloroquine), an antimalarial drug, to prevent flare-ups and reduce pain and other side effects. Early in the pandemic, hydroxychloroquine became difficult to get when people thought it could work clinically against COVID-19—which it doesn’t, Dr. Koumpouras says.

But it is the targeted treatments that could “move the needle” on helping more patients reach remission, Dr. Koumpouras says. With the three most recent medications, “we’ve actually improved the treatment outcomes for patients with SLE,” he says. “We know that, statistically, patients will do better on these treatments.”

A ‘personalized medicine’ approach to lupus

Lupus manifests differently from patient to patient, which is one thing providers in the Yale Lupus Program have come to expect. “Lupus is like snowflakes in that no two cases are alike,” Dr. Koumpouras says. The goal is to develop a personalized plan geared to lessen the impact of the disease on that patient’s life, he explains. “Then, I tend to see patients more frequently—maybe at four weeks instead of the typical three or four months after I first meet them,” he says. “We clinically measure how patients are doing with different scales and track their progress, aiming for a goal of remission or low disease activity.”

Jacinta Renaldi, APRN, who manages the Yale Lupus Center wellness clinic, highlights that lupus patients need to keep monitoring their condition. The clinic provides support for everything from understanding the disease to navigating insurance. The Yale Lupus Program provides patients with access to other rheumatologists, as well as to cardiologists, dermatologists, nephrologists, and other specialists. If a patient is seeing multiple providers, Renaldi helps them navigate their appointments.

It’s not unusual for patients who are experiencing relief from symptoms to stop taking their medicine, and she helps them manage that as well. “Younger people, in their teens and 20s especially, want to be like their peers. They don’t want to take medications and feel like they’re different,” Renaldi says. “So, you break down barriers and try to get them to understand the medications and how they work.”

The Yale Lupus Program also includes a pediatric transition program for young adults that emphasizes education and shared decision-making, as the transition into adult care is an at-risk period for young SLE patients.

Renaldi also discusses flare-up triggers, like cigarette smoking and sun exposure, which she says make lupus symptoms worse. She talks to women about pregnancy, and says women with lupus can get pregnant, but their pregnancy will be considered a high-risk one and should involve a maternal-fetal medicine specialist.

Vaccination is discussed too, since, medicine used to treat lupus patients can reduce vaccine efficacy. For example, if patients are getting a vaccination, they may need to take a break from certain lupus medications, since some of those work by decreasing the body’s ability to make certain antibodies. “When you’re treating lupus, reducing disease-related antibodies is good,” Renaldi says. “But when you are trying to vaccinate someone against another illness, you need the immune system to make the protective antibodies.”

The new drugs won’t help everyone with lupus, but Drs. Koumpouras and Craft believe there will be more treatments in the future.

“In the last 10 years, we’ve started to understand a lot more about the pathogenesis [the development path] of the disease, and that’s been the major advance,” says Dr. Craft. “That understanding has led to these new drugs, and it will lead to the development of others.”