Home » Health News » Is coconut sugar good for you: The truth 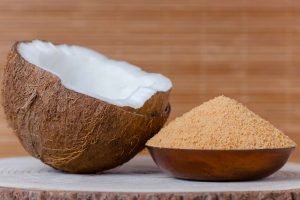 It is essential that people understand both the benefits and risks of using coconut sugar. This is true as many may turn to alternative sweeteners such as coconut sugar to try to fulfill their cravings in a guilt-free way.

Coconut sugar comes from the coconut palm tree. People also referred to it as coconut palm sugar, or coconut flower nectar in its liquid form.

What is coconut sugar and how is it made?

Coconut sugar comes from a natural source, the sap of the coconut palm. This sap circulates through the tree in a similar way to maple syrup.

To harvest coconut palm sap, farmers cut into the flower-bud stem of the tree to allow the nectar to flow out. To make coconut flower nectar, they then mix the sap with water and boil it down to a syrup.

Producers make granulated coconut sugar by leaving the nectar to dry and crystallize. They then break the dried chunks apart to create the granules most people recognize.

Coconut sugar has a similar look and feel to unprocessed raw sugar, but it may have more natural variants, such as light or dark granules or fluctuations in granule size.

Some people confuse coconut sugar with palm sugar. While they have a similar production process, palm sugar comes from a different tree.

People use the glycemic index or GI of certain foods to measure their impact on blood glucose levels. Foods with a higher GI score will raise blood sugar levels faster than foods with a low GI score.

Many people hear coconut sugar is a lower GI food than other sugar, but this can be misleading.

Table sugar, or sucrose, has a GI score of about 65, according to research on GI values published by the American Diabetes Association. But a study published in the Journal of Functional Foods on commonly consumed foods in the Philippines found the GI of coconut sugar to be lower, with a score of approximately 35 to 42.

Furthermore, the inulin in coconut sugar may play a role in lowering its GI score. But, it is still unclear if this makes coconut sugar anymore healthful for people who need low-impact sweeteners.

For many people, the difference between sugar and coconut sugar may be tiny.

Which is worse for your teeth?

Though table sugar and coconut sugar come from different sources, the chemical makeup of the sugars themselves is similar.

An article giving oral health advice in the British Dental Journal puts the sucrose content of coconut sugar at between 70 to 80 percent, where table sugar is over 99 percent sucrose.

The article states that while coconut sugar is less refined and has more nutrients, people should treat it just like table sugar and use it sparingly. It also notes that it is harmful to teeth in the same way as table sugar.

Some people may think coconut sugar is a perfect alternative they can add to recipes guilt-free and without restraint.

Unfortunately, coconut sugar is not a weight loss miracle or nutritional wonder. It does contain additional nutrients when compared to sugar, but the difference is small.

It is also critical to understand that coconut sugar is still high in carbohydrates and contains calories, two things many people trying to lose weight may want to limit.

So, 100 g of coconut sugar is still 100 g of carbohydrates, though only 75 g of these are sugars. It also contains about 375 calories. While these numbers are slightly less than table sugar, they do not make coconut sugar a guilt-free food.

It is recommended to consume no more than 6 or 9 teaspoons per day of added sugar for women and men, respectively. This is irrespective of whether it comes from coconut sugar, table sugar, or any other type of added sugar.

For people looking for an alternative sweetener to sugar, coconut sugar may be a similar, more natural option.

It is important to note that it is not a nutritional superfood, but only a marginally more healthful version of sugar. Coconut sugar will still affect blood glucose levels and may have a negative impact on health, similarly to any other added sugar. It also has plenty of calories and carbohydrates.

While it may not be the guilt-free superfood many companies claim, coconut sugar could be suitable for those looking for more natural forms of sugar. As with all sugars, people should enjoy it in moderation.

Why a low-carb diet may not be so good for you
coconut, for, Good, Is, sugar, the, truth, you
Latest Posts