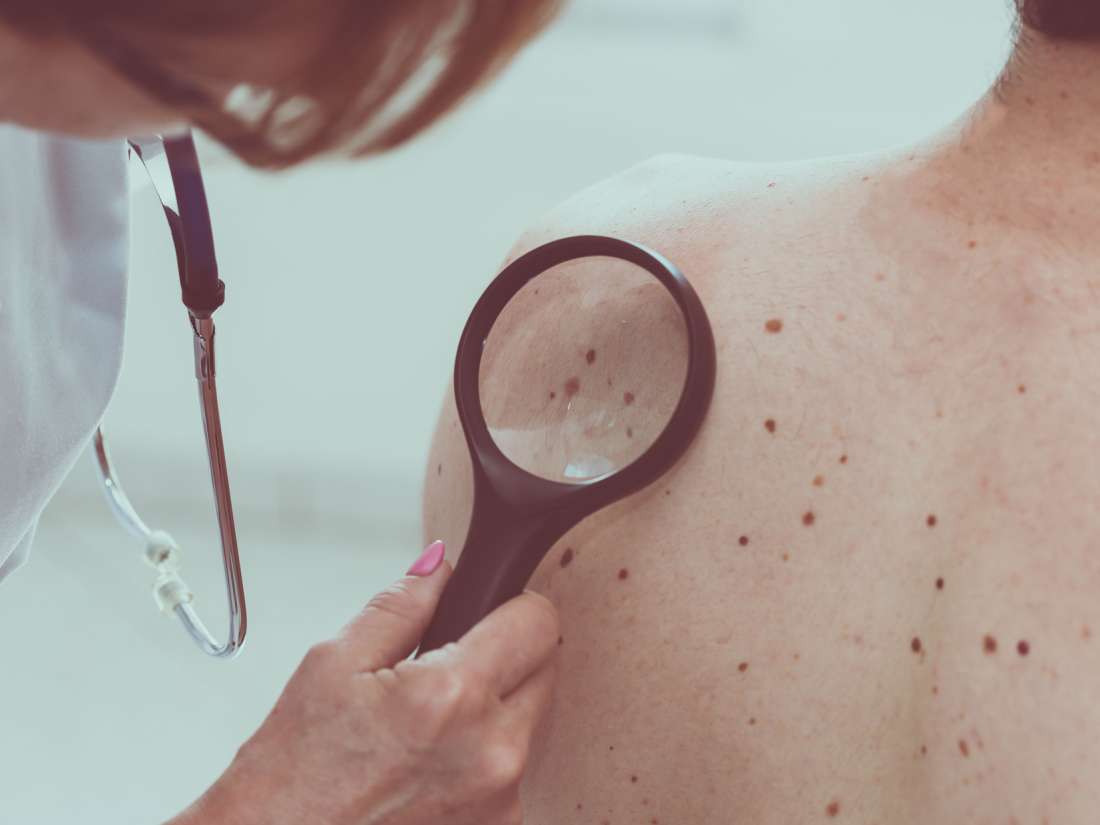 Skin cancer is by far the most common cancer; there are a number of types, the most common being basal cell carcinoma. There are millions of diagnoses each year in the United States.

Our skin is regularly bombarded by ultra violet light, which damages DNA and can eventually lead to cancer.

In our cells, there is a range of proteins whose job it is to repair this type of damage.

Catching skin cancer at an early stage is important and, compared with other cancers, relatively easy.

Many internal cancers, however, do not produce particularly obvious symptoms until they are at an advanced stage. Because of this, finding ways to predict who might be most at risk is vital.

According to a new study — which now appears in the journal JCI Insight — basal cell carcinoma may help doctors predict who has an increased risk of developing other types of cancer.

Skin cancer as a predictor

Researchers from Stanford University School of Medicine in California recently investigated how the number of basal cell carcinoma occurrences might impact an individual’s future cancer risk.

Dr. Kavita Sarin, the senior author, explains, “The skin is basically a walking mutagenesis experiment. It’s the best organ to detect genetic problems that could lead to cancers.”

Dr. Sarin and lead study author Hyunje Cho followed 61 people who had been treated at Stanford Health Care for “unusually frequent basal cell carcinomas.” Participants had an average of 11 incidences over 10 years.

The scientists wanted to see whether these people had any mutations in the proteins responsible for DNA damage.

“We found that about 20 percent of the people with frequent basal cell carcinomas have a mutation in one of the genes responsible for repairing DNA damage, versus about 3 percent of the general population. That’s shockingly high.”

Dr. Sarin continues, “We discovered that people who develop six or more basal cell carcinomas during a 10-year period are about three times more likely than the general population to develop other, unrelated cancers.”

The additional cancers included melanoma and cancer of the blood, breast, prostate, and colon. “We’re hopeful that this finding could be a way to identify people at an increased risk for a life-threatening malignancy before those cancers develop,” says Dr. Sarin.

Building up the evidence

To firm up these findings, the team procured a larger sample: a database of insurance claims. The sample included over 13,000 people who had experienced six or more basal cell carcinomas.

The analysis mirrored their earlier findings; the individuals were more than three times as likely to develop other cancers.

With the increased number of data points, the scientists identified an upward trend: the more basal cell carcinomas that someone had, the more their risk of other cancers increased.

The researchers are continuing their study, adding to their dataset as time goes by. However, they are keen to put things into perspective. Dr. Sarin explains, “About 1 in 3 Caucasians will develop basal cell carcinoma at some point in their lifetime.”

“That doesn’t mean that you have an increased risk of other cancers,” she says. “If, however, you’ve been diagnosed with several basal cell carcinomas within a few years, you may want to speak with your doctor about whether you should undergo increased or more intensive cancer screening.”

Although this research only affects a relatively small subset of patients, it could help catch challenging cancers before they have the time to develop too far.