Home » Health News » Watching football IS good for you

Watching football IS good for you 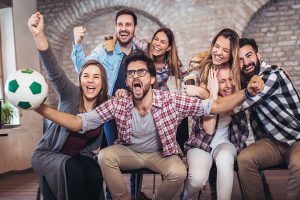 Watching football IS good for you: Scientists discover fans get a ‘cardio workout similar to a 90-minute brisk walk’

Watching football is good for you, scientists have discovered in a study that will have sports fans rejoicing.

Researchers from the University of Leeds analysed 25 fans of the city’s soccer team over three Championship games.

They found the supporters’ heart rates increased by around 64 per cent, with some peaking at 130 beats per minute (bpm). A ‘normal’ resting heart rate is between 60 and 100 bpm.

This ‘workout’ is equivalent to going on a brisk walk for an hour-and-a-half, the scientists claimed.

Watching their team win also reduced the fans’ blood pressure and gave them a ‘psychological boost’ that for some lasted all day.

However, seeing their club defeated had the opposite emotional effect with fans battling a ‘slump’ that one compared to ‘a friend dying’. 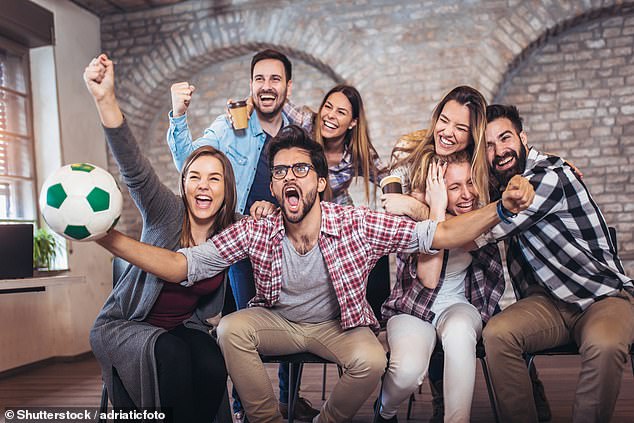 ‘It was clear fans were passionate about the game with heart rate elevated during the match to a similar level to that when going for a brisk walk (generally 20 per cent higher than resting heart rate),’ lead author Dr Andrea Utley said.

‘A goal for either team caused a brief increase in heart rate of an average of 20bpm from the match average.

‘Ultimately supporting your team at a football match gives you a moderate cardiovascular workout and depending on the result of the match, a psychological boost or slump.’

Many high-profile sport stars have spoke openly about battles with mental health.

Mental health in ex and current football players has been thrust into the spotlight following the death of Gary Speed and the issues faced by Stan Collymore.

Other examples, including Robert Enke, Frank Bruno and Marcus Trescothick, show that mental health is relevant to everyone, even at the elite level.

The FA says mainstream clubs should be comfortable including people with mental health problems, in training, matches and socially.

It claims it wants to make coaches and team mates confident and comfortable about talking about mental health problems, in the same way that people discuss physical injuries.

The PFA operates a 24-hour phone line for players to call which offers complete confidentiality.

There were 160 different cases in 2016 where players approached the FA for help with mental health.

That number rose to 403 in 2017 year and figures revealed to the Guardian show more than 250 players used the service during the first six months of 2018.

Their heart rates were monitored before and after each match, as well as during  half time.

Over the course of the three games, the fans’ heart rates increased to a high of 130bpm; 64 per cent more than at the start.

A Leeds goal rose their heart rates by an average of 27 per cent, while watching their opponents score increased it by 22 per cent.

Victorious fans also saw their blood pressure go down after the match, while ‘losers’ experienced temporary hypertension after their defeat.

When it came to the fans’ emotions, watching their team win resulted in an ‘absolute high’ that for some lasted all day.

The thrill of not knowing the outcome of a match is thought to ‘arouse’ supporters to experience a level of ‘good stress’.

‘Although people think watching football takes you over the edge, it doesn’t.

‘We found it just kept people at a good level of arousal.’

However, when the fans’ club was defeated, their low mood could become ‘quite severe’.

One said watching his team lose felt like a ‘low hum’, while another admitted it was the first thing they thought of the next day.

‘That disappointment of Friday meant the first thing I thought of when I woke up on Saturday morning was, “I don’t believe we lost that game”,’ the fan said.

‘That sort of sets the mood for the rest of that morning until you can pull yourself out of it.’

Another even went as far as saying the loss is comparable to a ‘friend dying’.

Is Gatorade good or bad for you? Benefits and risks

The Internet Is Obsessed With This Miracle Cure For Acne
Football, for, Good, Is, watching, you
Latest Posts