A new, painless, non-invasive procedure that harnesses ultrasound technology to reposition kidney stones, in an effort to offer the sufferer quick relief, will undergo testing in emergency patients.

The development and assessment of the new technology is led by University of Washington and UW Medicine, in collaboration with other universities and agencies.

Kidney stones are an increasingly common condition that affects 1 in 11 Americans during their lifetime. The condition is even more frequently encountered in astronauts during space missions. The hope is that the new technology could benefit astronauts as well as Earth-side patients.

The approach will be tested on in local patients at UW Medicine’s Harborview Medical Center and University of Washington Medical Center Emergency Departments.

After the invention of an ultrasound device to better detect kidney stones, engineers from the Applied Physics Laboratory at the University of Washington observed that they could accurately reposition small objects with ultrasound on a laboratory table. In conjunction with partners in the UW School of Medicine urology, emergency medicine, and radiology departments, the researchers went on to advance the technology and to use the same waves from a hand held ultrasound transducer to re-locate kidney stones in preliminary tests.

The work has also led to a spin off company, SonoMotion, which is working to develop a commercial device for the same purposes of non-invasive kidney stone repositioning.

Every year more than 600 people in the throes of a kidney stone episode seek emergency care at Harborview and UW Medical Center in Seattle.

Kidney stones become symptomatic if they enter the urinary tract, have trouble passing, and become stuck where they can cause debilitating pain. In addition, obstruction of urine flow causes a backup. This can result in swelling of the kidney, and cramping in the ureter, thereby setting the stage for infection or further kidney damage.

Because space travel makes astronauts prone to kidney stones due, in part to bone demineralization from weightlessness, they are at increased risk.

The NASA evidence base and publications note that astronauts have had more than 30 instances of kidney stones within two years of space travel. Medical assistance is a formidable challenge for those orbiting this planet or heading to other solar system destinations.

“For this trial we will be trying to reposition obstructing stones for our emergency department patients,” said Dr. M. Kennedy Hall, assistant professor of emergency medicine, and co-principal investigator of the study along with Dr. Hunter Wessells, professor and chair of urology, both at the UW School of Medicine.

“Our hope is that we will be able to move stones back into patients’ kidneys.” Hall said, “This could make our patients more comfortable and allow them to deal with the kidney stone on their terms, not on the stone’s terms. An additional benefit of repositioning kidney stones is potentially avoiding unnecessary pain medications such as opioids for patients discharged from their kidney stone emergency.”

“We anticipate being able to reposition an acute stone to relieve pressure on the kidney. This would have the benefit of relieving suffering as well as avoiding emergent urologic intervention,” explained Wessells. 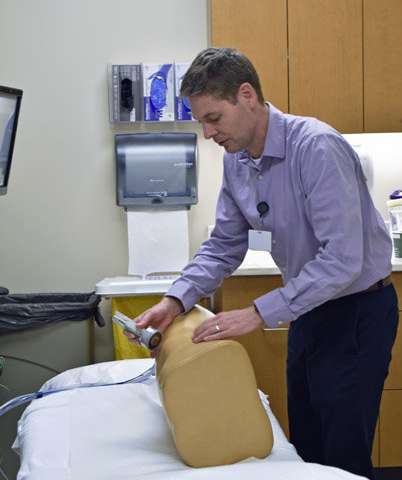 Their clinical research team will test a protocol that might be carried out safely and effectively during a space mission by on-board medical responders.

Michael Bailey, an ultrasound researcher at the UW Applied Physics Laboratory and one of the project leaders, emphasized, “This technology could give patients on Earth the ability to immediately return to normal life (in contrast to surgical treatments or continued, painful attempts to passing the stone). For astronauts in space, this option could save a life and allow astronauts to complete urgent mission responsibilities without having to turn the space shuttle around—a significant consideration.”

Bailey mentioned a past incident where a Russian cosmonaut who seemed to be experiencing a blocking kidney stone while in space.

The mission crew was preparing for emergency re-entry when it appeared that his stone finally passed.

The current rendition of the ultrasound kidney stone push technology has been coined the flexible ultrasound system, or FUS, and is about the size of a lecture podium on wheels. It has a built-in imaging screen and a hand-operated device for delivering the waves through the surface of the body.

If trials on Earth are successful, NASA would likely plan to fly the ultrasound system in future missions, including longer duration human explorations of Mars.