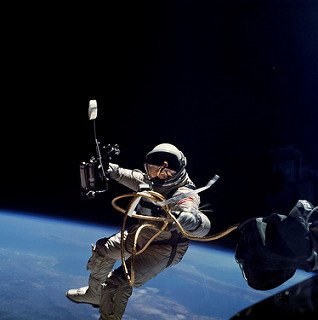 Humankind still dreams of breaking from the bounds of Earth’s atmosphere and venturing to the moon, Mars and beyond. But once astronauts blast past the International Space Station, they become exposed to one of the many dangers of deep space: galactic cosmic radiation.

The effects of deep space radiation are difficult to study in humans, namely because the last people to blast beyond Earth’s magnetic field were Apollo astronauts. But scientists can simulate the extraterrestrial hazard in mice. Now, new NASA-funded research from UC San Francisco suggests that female space travelers may perhaps fare better than males in the face of cosmic radiation: while male mice show significant cognitive decline and brain structure changes when exposed to simulated cosmic radiation, female mice do not.

“We can see stark differences in the female responses, from behavioral read-outs down to the cellular and molecular level, when compared to the male counterparts,” said Karen Krukowski, Ph.D., postdoctoral researcher and first author of the new study. “We did not expect to see a difference – it was a bit surprising.”

The research – conducted in the lab of UCSF neuroscientist Susanna Rosi, Ph.D., and published online August 11, 2018 in Brain, Behavior and Immunity – raises new questions about why female mice are immune to the effects of cosmic radiation, and could lead to the development of treatments to protect human space travelers of both sexes, the authors say.

“Thanks to NASA, we are planning on doing further research to understand the specific mechanisms behind these profound differences,” said Rosi, professor of physical therapy and rehabilitation and of neurological surgery, and member of the UCSF Weill Institute for Neurosciences. “Based on recent evidence, we believe that cells known as microglia protect the female brain against insults such as deep space radiation. Understanding what makes these cells more resistant could be key to pinpointing specific treatments.”

NASA aims to launch a mission to Mars by 2030 and wants to prepare for potential obstacles their astronauts may encounter along the way. One danger lies just outside the protective bubble of our planet’s magnetic field, past the International Space Station bound in low Earth orbit. This celestial hazard is known as galactic cosmic radiation – high energy protons and charged nuclei that mainly come from outside our solar system and even from other galaxies. These particles can whiz straight through the hull of a spaceship, as well as any human housed inside, potentially causing serious health problems.

As humankind launches into deep space, it is essential that scientists understand how galactic cosmic radiation could impact future long-haul astronauts of both sexes – especially considering over forty percent of the most recent class of astronauts is female.

Prior studies of mice exposed to simplified simulations of isolated components of space radiation –such as protons or nuclei of helium, oxygen, titanium or silicon atoms – found that exposure to these highly-charged particles induces short- and long-term cognitive decline. But these studies were primarily conducted with male rodents.

“We wanted to understand if there are any sex differences in response to deep space exposure,” Rosi said.

By simply including both sexes in their study, the researchers learned that female mice are protected from the cognitive problems induced by space radiation in male mice. (The paper’s original title was “I am Woman, Watch Me Soar.”)

In the new work, researchers at the Brookhaven National Laboratory in New York exposed mice to a newly designed “GCR cocktail” – a combination of protons, helium and oxygen developed by Tamako Jones and Gregory Jones at Loma Linda University. Exposing mice to a mixture of particles better simulates conditions astronauts will experience in deep space.

Back at UCSF, scientists evaluated the irradiated animals’ sociability, social memory, anxiety-like behaviors and memory. Irradiated males interacted significantly less with other mice, had difficulty recognizing familiar mice and objects, and showed greater aversion to exploring open, well-lit spaces. But irradiated females behaved as if they had not encountered radiation at all.

Behavioral changes in the irradiated males corresponded to physical alterations in their brains. Most notably, microglia – resident immune cells of the brain and spinal cord – became very active following radiation. The boosted activity was measured in the hippocampus, a brain structure integral to learning and memory.

Corresponding with the observed microglial activation, the researchers found that the number of synaptic connections in the male hippocampus fell significantly. Landing docks for the excitatory neurotransmitter glutamate, which are known as AMPA receptors, were also greatly depleted in the hippocampus. Again, these changes were only seen in irradiated male mice – females were completely spared.

Microglia have both a “resting” and “active” state, and the active state often ignites inflammation in the surrounding tissue. Research suggests that female mice have more resting microglia than males, and in response to trauma, these microglia induce significantly less inflammation. Instead, female microglia appear to promote neuroprotective effects.

In a prior study, Rosi’s lab was able to “reset” microglia in the brains of male mice to a less inflammatory state and found that this prevented loss of cognitive functions, restoring memory function to levels similar to what is seen in unexposed animals. In that study, the researchers exposed the mice to a single highly-charged ion, then eliminated nearly all of their microglia using a drug that blocks a signal vital to microglial survival. After two weeks, the mice were taken off the drug, and their microglia levels naturally rebounded.

Months later, the animals were tested and were found to be protected from radiation-induced cognitive deficits. The research demonstrated that by resetting the immune system early on after radiation exposure it is possible to prevent long-term deficits.

Unless we spot changes, most life experiences are fabricated from memories