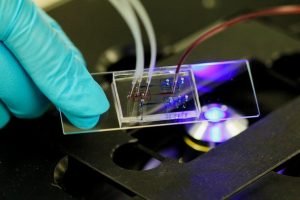 Plasmacytoid dendritic cells (pDCs) are a rare type of immune cells that secrete large quantities of type 1 interferon (I-IFN), a key driver of immunity to infectious invaders and cancer. However, the mechanisms that control the I-IFN secretion are still poorly understood. Researchers from Eindhoven University of Technology and Radboud University Nijmegen have developed a groundbreaking, high-throughput lab device to speed up the research. Remarkably, they discovered that only a very small fraction of single pDCs produce I-IFN and is responsible for the onset of immunity. The results are published in Nature Communications this week.

The research was led by assistant professor of Biomedical Engineering Jurjen Tel, who leads the group in Immunoengineering at the Eindhoven University of Technology, in collaboration with professor Carl Figdor (Tumor Immunology) and professor Wilhelm Huck (Physical Organic Chemistry), both from the Radboud University Nijmegen.

Dendritic cells are specialized immune cells in the body that help the immune system to recognize and fight off intruders and cancer cells. They break down infected or cancer cells into smaller pieces (antigens), which are then brought to the cell surface so that other immune cells, the killer T cells, can see them. Killer T cells then start an immune reaction against any cell in the body that contains these antigens. Plasmacytoid dendritic cells (pDCs) have gained attention because of their capability to fight cancer via the secretion of a special protein called type 1 interferon (I-IFN). Several pDC subclasses have been characterized by understanding heterogeneity in their transcriptomic profile and molecular outfit. Whether these individual differences may have an impact on each pDC’s ability to produce I-IFN remained, to date, unanswered.

Tel and colleagues now demonstrate that I-IFN production by human pDCs is regulated by stochastic gene expression or, in other words, by randomness. Remarkably, when stimulating thousands of cells individually, only a very small fraction (< 1%) of pDCs was shown to produce I-IFN. Furthermore, this study also demonstrates that single pDCs can boost their own activity and generate population-driven I-IFN responses, in a feed-forward amplification loop.

The team guided by Tel has developed a microfluidic platform which enables the study of human pDCs and the I-IFN response on a single cell level. In order to do so, this platform generates thousands of identical droplets which can be considered as miniaturized nanolabs, each of them containing a single cell. These droplet nanoreactors allow for the study of cell-to-cell variations and, importantly, the execution of massively parallelized single cell experiments. An achievement which represents a real technological breakthrough in the field of droplet-based microfluidics. Attempts were made in the same direction by other researchers, but was impeded due to complex detection equipment, rarity of cells or difficult handling conditions.

The results described in the work of Tel and colleagues have far-reaching implications. In case of pDC-based anti-cancer vaccines, certain parameters should be reconsidered, one for all the number of injected cells, in order to improve efficacy. In addition, therapeutic approaches that target pDCs inside the body should consider that not all pDCs are the same, and that pDCs might react differently to treatment depending on the tissue microenvironment.