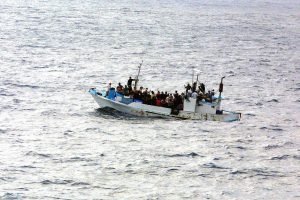 Researchers worked with a group of refugees – half suffering from PTSD, the others not – and asked them to suppress neutral memories. Results showed that participants who struggled to control these thoughts were more likely to show symptoms of PTSD.

Experts at the University of Birmingham, Ruhr-Universität Bochum, the University of Konstanz and Berlin’s Max Planck Institute for Human Development worked with 24 refugees from a range of European, African and Asian countries to complete the study, which is published in Scientific Reports.

They found that the more severe the PTSD symptoms, the more difficult refugees found suppressing neutral memories. Their study also indicated that efforts to forget the memories caused problems in remembering non-traumatic experiences.

The research indicates that PTSD patient’s problems in suppressing traumatic memories relates to dysfunctional gamma frequency activity in the brain – a discovery that could help to shape more effective treatments.

Dr. Simon Hanslmayr, Reader in Cognitive Neuroscience at the University of Birmingham, commented: “Difficulties experienced by people with severe PTSD symptoms when attempting to suppress bad memories is linked to the ability to regulate gamma frequency brain activity.

“This novel biomarker could help identify risks posed to PTSD patients by memory suppression techniques and assist in adapting and developing psychotherapeutic methods. Our study certainly raises concerns about unwary use of memory suppression in treating PTSD sufferers.”

The researchers note that more research is needed into the effects of traumatic stress in refugees. This would help to develop effective medical strategies to deal with the immediate health and socioeconomic challenges posed by high numbers of refugees.

Dr. Gerd Waldhauser, from the Institute of Cognitive Neuroscience at Ruhr University Bochum, commented: “Refugees and asylum seekers are often excluded from medical treatment or do not seek help. They are often unable or unwilling to take part in deamanding cognitive neuroscience studies, making data such as ours precious in understanding a rarely-studied population with abundant mental health problems.”

PTSD is a disorder characterised by the recurrent and uncontrollable intrusion of traumatic memories. Patients tend to try to suppress these intrusions which can aggravate the condition’s symptoms and cause further emotional distress.