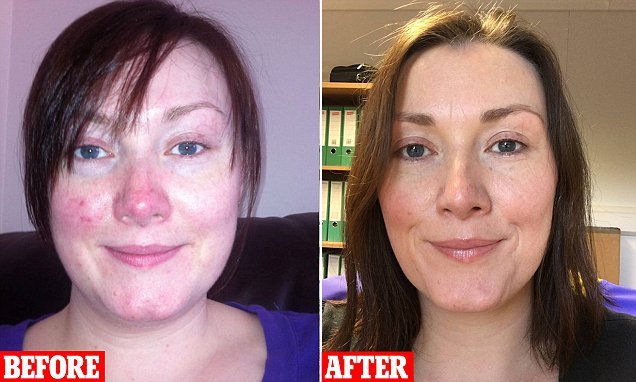 The healing mineral water that has ‘cured’ a woman’s rosacea: Mother-of-two, 33, reveals water bottled near the Queen’s Balmoral estate has healed her ‘red and firey’ skin

A 33-year-old woman claims drinking a litre of mineral water daily from a source near the Queen’s Balmoral Estate in Scotland has cleared up her rosacea.

Kirsten Campbell, from Insch in Aberdeenshire, suffered with red and painful skin before she began drinking the bottled water instead of tap water every day.

Now, five years after her diagnosis, Mrs Campbell claims her skin is almost back to normal and the condition is under control – thanks to Deeside Mineral Water.

The mother-of-two began drinking the water ‘religiously’ after she read a string of scientific studies about its hydrating abilities, and now swears by the drink.

Deeside, which is bottled near Balmoral Castle, the Queen’s holiday home in the Cairngorms National Park, is reported to have more health-giving benefits than other waters.

Scientific studies into its effects on skin and arthritis have been published as far back as 1996, suggesting there may be some truth to the claims. 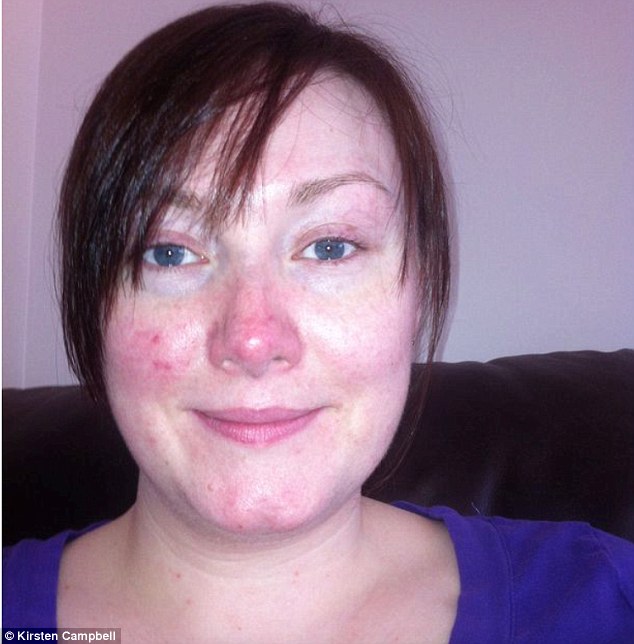 Kirsten Campbell, from Aberdeenshire, was diagnosed with rosacea in 2012, when she said her skin was ‘red and firey’, and she suffered painful bumps on her face 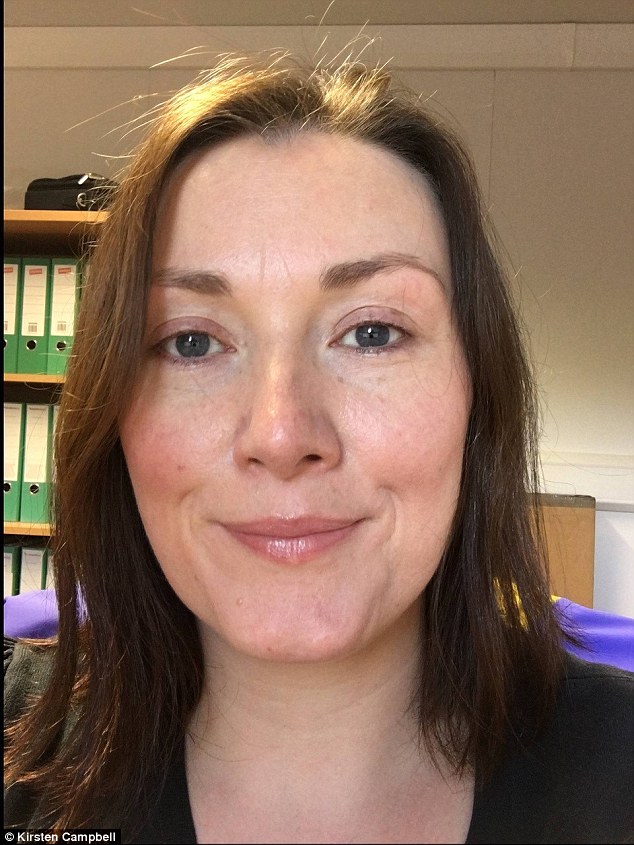 But after sticking to a regime of drinking Deeside Mineral Water and using sun cream, Mrs Campbell said her skin has returned to normal – something medicine did not help with

Experts have said in small studies that, compared to tap water, there were signs it could improve skin hydration and reduce symptoms in arthritis patients.

Kirsten Campbell, a financial controller living in Insch, about 27 miles from Aberdeen, was diagnosed with rosacea in 2012, aged 28.

She tried prescription face cream but could not carry on with the medicine when she became pregnant with her second child.

‘My skin was really red and firey and I had lumps on my face,’ Mrs Campbell told MailOnline.

‘My nose was very red and sore under the skin, and the bumps on my face were like having a really big spot which would never form a head and never pop.’

After trying medication but finding it didn’t help and that she could not continue taking it while pregnant, Mrs Campbell turned to sun cream and Deeside water.

She now drinks almost a litre of the water every day and is convinced it is responsible for clearing up her skin.

‘I did try medication,’ Mrs Campbell said. ‘But the cream descreases the skin’s ability to protect itself from sun exposure which made the rosacea worse.

‘I knew I had to look after my skin with good hydration, and avoiding spicy food and sun exposure.

‘Doctors also told me to avoid exercising because that can make it worse but I run so that was a problem for me. I exercise five times a week so I had to find another way.

‘I wear SPF 50 sun cream every day and drink five to six litres of Deeside Mineral Water a week.’

Now, nearly six years since she was diagnosed, Mrs Campbell says her skin is almost back to normal.

‘The redness has gone away and now the bumps are down to little dots,’ she said. ‘My rosacea is hardly visible and people wouldn’t know I had it unless I told them.

‘I have no doubt that Deeside Mineral Water is the reason why my skin now looks so good.’

Mrs Campbell’s experience chimes with claims made by the Deeside Water Company, which bottles the drink at a spring in the village of Ballater.

SCIENTISTS STUDY EFFECT OF THE WATER ON RHEUMATOID ARTHRITIS

Scientific studies commissioned by the Deeside Mineral Water brand have looked at the effect drinking it has on the symptoms of rheumatoid arthritis, after claims it has been used since the 18th century to treat it.

In the most recent trial, done by the Aberdeen Royal Infirmary in 2003, 35 patients were studied when they drank either Deeside Mineral Water or placebo tap water for four weeks.

They said the pain improvement was ‘statistically significant’ and that drinkers also felt an improvement in overall wellbeing.

The study said: ‘72% of patients in this study benefited from the addition of 1 litre of Deeside Water each day to their regular medication in the treatment of symptoms of mild to moderate rheumatoid arthritis.’

It says the water ‘acts like an anti-oxidant’ and claims molecules in the liquid form smaller clusters than in tap water, making it easier for the body to absorb them and making them more hydrating.

And a study done by scientists at the University of Leeds in 2008 found women who drank the Deeside water had fewer wrinkles and spots than when they drank tap water, and their skin was 23 per cent more hydrated.

After drinking the bottle water the same women had an average of one fewer wrinkle and four fewer spots.

And when tested using a corneometer – a device which tests skin hydration – skin on their cheeks and foreheads was an average 23.4 per cent more hydrated.

‘The results suggest a trend towards perceptible improvements in skin condition whilst using Deeside Water,’ the study said.

‘It’s not rocket science that water is good for the skin,’ Mrs Campbell added. ‘And I trusted the research the company has done and know the water is used in brand-name makeup.

‘I saw improvements immediately and it took about three to six months for my skin to completely return to normal.’

‘The water was historically known for its healing benefits’

Managing director of Deeside Mineral Water, Martin Simpson added: ‘We did a lot of research into the history of the water which dates back over centuries.

‘It was known for its healing benefits and is the reason Ballater grew up as a spa town.

‘We’ve completed many clinical and laboratory trials over the last 20 years to prove Deeside Mineral Water can benefit health.

‘The water has a unique combination of natural properties which support living cells and encourage well-being.’

Rosacea is a common rash that affects the centre part of the face, most commonly in middle-aged people.

Sufferers are more likely to blush easily, which is followed by persistent redness, bumps and pus spots.

The cause of rosacea is not fully understood, but many think it occurs due to blood vessels beneath the skin dilating too easily.

It is more common in fair-skinned women.

Are there other symptoms? And how is it treated?

As well as affecting their appearance, rosacea sufferers may also experience:

There is no cure for the condition, and treatment focuses on avoiding triggers and easing symptoms via oral antibiotics and topical creams.

The photographer allergic to water